Return To Middle School In 'PEN15': Creators Say 'It's All About Survival' 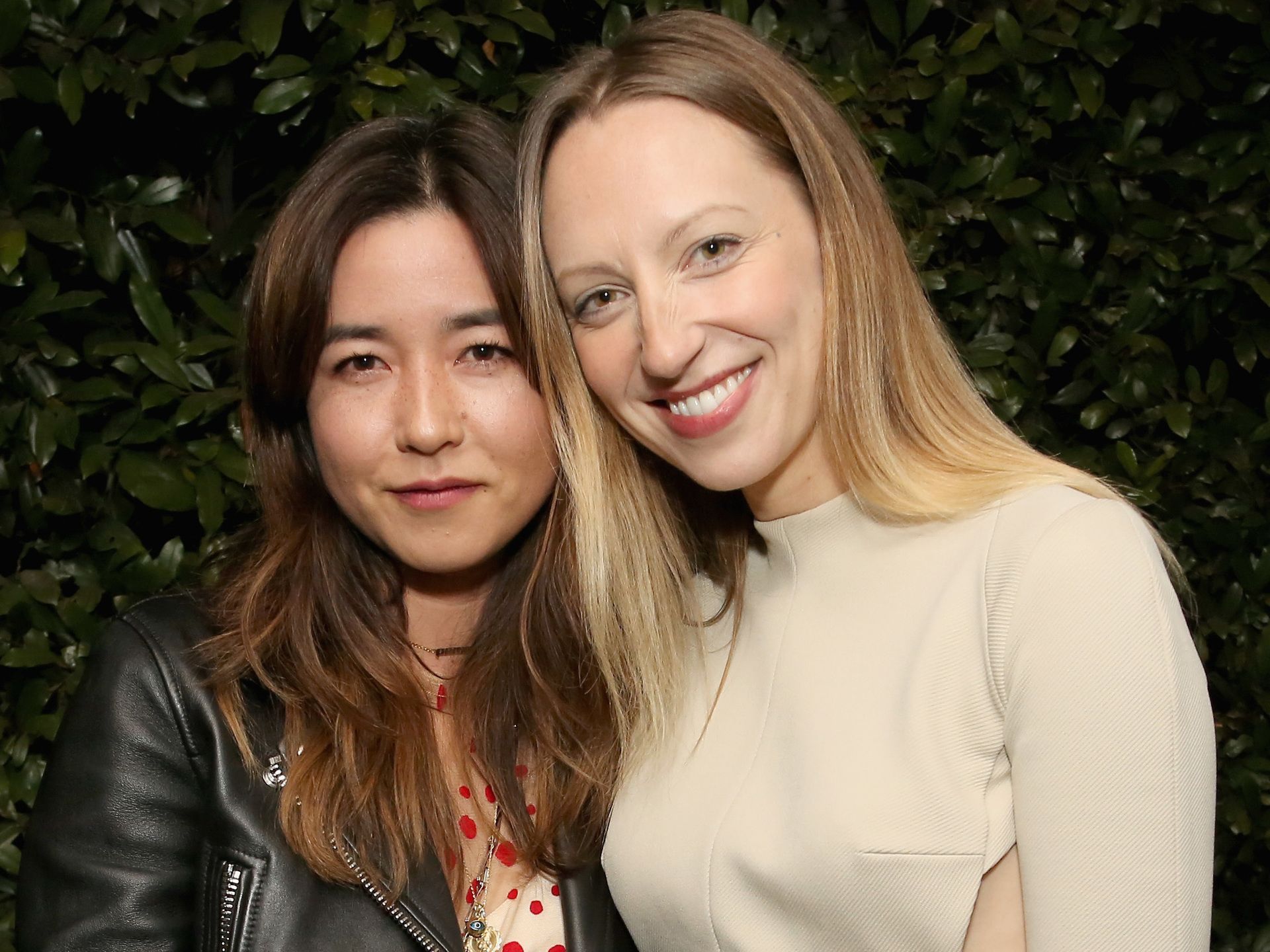 The show is based loosely on their own middle school years and Erskine and Konkle, who are both in their early 30s, play 7th-grade versions of themselves on the show — alongside castmates who are actually middle schoolers.

The decision to cast adults in the starring roles was dictated, in part, by the show's content: "We wanted to explore a lot of the real things that happened to us at that age," Erskine explains. (Ed. Note: The conversation below includes some frank talk about sexuality.)

Transforming to their middle school selves meant donning ill-fitting, 2000s-era low-rise jeans, as well as wigs and retainers. "We had kind of binding straps on our chests," Konkle says.

But beyond the physical transformation, they wanted to explore the emotional lives of their 13-year-old selves. Anna watches her parents' marriage fall apart, and feels uncomfortable at home. Maya gets her period and hides it from everyone out of shame. The two are curious about boys and want to be in with the popular girls, but are full of anxiety about being left behind or excluded.

Hulu renewed PEN15 for a second season, so there will be more cringe-worthy stories coming. But even outside of the show, Erskine and Konkle say the middle school Maya and Anna are never too far below the surface.

"She's always there, I think. She's a big part of who I am," Konkle says. "If I'm insecure, if I'm feeling less-than ... I have the tools now to help her out and get her through that moment."

On developing the concept for the show, in which they play characters decades younger than themselves

Erskine: Anna and I were first actors, so we always approached telling stories through characters. ... [We thought] it'd be great to be 13 again, go through all of this trauma, and but there was a lot of fear and questions of how is this going to actually work with real 13-year-old kids. And so we had to film half a pilot [episode] essentially, to see if it would work, as an experiment.

On what they were really like in seventh grade

Konkle: I was the same and different. I think that the version of me in PEN15 was more me in fourth and fifth grade. I think in real life by seventh grade I learned to hide the things that I realized made me a target. In fourth and fifth grade I would tell people not to cheat. I would tell people not to swear. ... I think as I got older I just learned that I'm going to keep some of those things to myself. ... But I definitely have always been the type that connects better with adults, like the character in PEN15. I can be like delusional[ly] optimistic, and that can be good and bad, and so that's still with me.

Erskine: I think my fear of letting go of childhood was a huge issue for me. I wanted to be an adult, yet I was really scared of losing my innocence — especially in front of my parents — because I equated innocence with love. So I thought if I maintained this childlike-self or identity, then my parents would continue to love me the way they've loved me all these years. So that's a weird misconception that I created in my head.

On feeling excluded because of race

Erskine: In my memory, I wasn't accepted. But when I talked to people who went to my middle school they always say, "You seemed so happy! You were friends with everyone and you were doing OK!" — while I was going through this private misery, I guess.

And I looked in my yearbook recently and I got overflowing messages of love, but in each message it was, "You were the cutest Asian I've ever met!" "Oh my God, I love you so much. You're the cutest Asian, Maya." "Screw those other Asians, you're the best Asian!" That was the majority of these messages in my yearbook, and I'm sure I took that in as a kid in my heart, of, "Oh, no one likes me for me." ...

I remember when I went over to a friend's house and we were putting makeup on and when they would put eyeliner on, they had double eyelids, so you could see the skin above the eyeliner. But when I would put the eyeliner on, it covered my whole eyelid. I'll get emotional thinking about it. And not having it look the same, it made me hate myself. I hated my eyes. I hated that I didn't have thick double eyelids like my friends, because that's all I saw around me. I didn't have any [Asian] ideals of beauties to look up to when I was a kid.

On being harassed in middle school by other classmates

Konkle: There was kind of a cycle in my school where the older girls would harass the younger girls. ... In middle school there was a rumor that went around about me that I masturbated with an ice cube. ... And they came up with a really brilliant nickname called "Ice Box" ... and that followed me till I graduated high school. With it came this kind of sexualization of me that I wasn't ready for, like I was very much a prude at the time ... and yet there is this thing there about me out there, and I was labeled as a slut, essentially. I mean there are posters put up about me that said "slut" and it got really extreme.

Sexuality at that age is really bewildering and confusing and it doesn't make sense. - Maya Erskine

Erskine: Sexuality at that age is really bewildering and confusing and it doesn't make sense. I was turned on by, like, ... rotten apple cores and sand dunes. For some reason [they] came into my head once. I don't know what the connection is, but the point is that abstract things can turn you on at that age, and what we really wanted to explore was the shame around it and how you're never told about it. Kids don't talk about it. I thought I was a complete pervert. I thought I was gonna go to jail. I thought I was a monster. I had no knowledge of what I was doing and yet I [instinctively] knew how to do it, and so that really scared me.

Erskine: I might've been one of the first to get my period and at my school. ... It was the end of innocence for me. I thought, oh, now I'm a woman. Now my parents won't look at me the same way. I somehow instilled in my head that having my period was a death sentence, a death of my childhood.

I didn't even ask for pads or tampons, I just rolled up toilet paper like I do in the show into these thick stacks. And did that for a year until I was in a play. ... I didn't have enough toilet paper and so I had found an old pad in the green room. We were doing a performance of A Little Princess and ... there was like a pad from the '70s. It had no adhesive. So you just plopped it in, which I was used to with my toilet paper, and I had to wear underwear you know tights, petticoat, boomers, layers upon layers. I was like, "This baby's gonna stay in there!"

And for some reason ... [in the play] I jumped into [my father's] arms and he spins me around, and everyone started laughing. This was a dress rehearsal for the students, so it wasn't even a performance with adults, and my pad flew out onto the stage. I didn't know. So I kept going with the scene then it went black and the techies put a spotlight on the pad, and so I had to grab it during the transition and then go into the next scene and hold it in my hand.

It's so funny, because I don't look at that as this traumatic time. I was embarrassed, but it sort of released me in a way like, OK, well it's out there, I got my period!

Heidi Saman and Seth Kelley produced and edited the audio of this interview. Bridget Bentz, Molly Seavy-Nesper and Beth Novey adapted it for the Web.