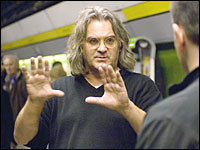 On the next Fresh Air -- director Paul Greengrass who directed the films United Flight 93 and Captain Phillips. His new film is the western News of the World, and it stars Tom Hanks as a veteran of the civil war and is set in poor, small, Texas towns and settlements shortly after the war. Join us.

(Photo: Paul Greengrass, shown here on the set of The Bourne Ultimatum, also directed The Bourne Supremacy, the second film in the trilogy - Jasin Boland/Universal Studios)