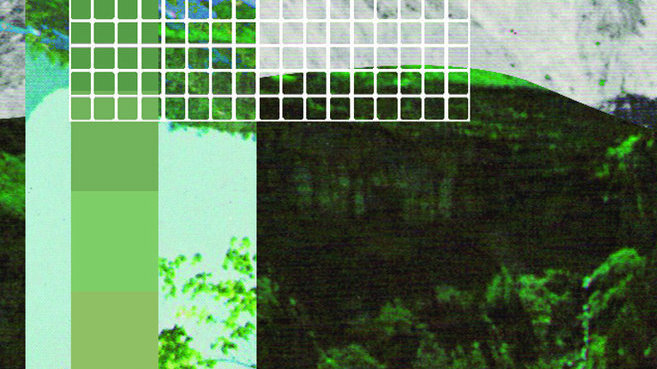 Record labels can be generous, quiet friends. You trust their taste, argue (one-sidedly) about the stuff that sucks, spend hours with each other late at night without speaking, but sharing a language nonetheless. There are a handful of labels like this for me, where the disparate possibilities of music can align in unexpected geometries.

Patient Sounds has been one of these friends to me. Matthew Sage, who runs the label, knows that dynamic drone, jittery footwork, oddball drone-folk, hypnagogic guitar music and cosmic Americana can exist in the same space. The cassettes' J-cards share a similar aesthetic — mostly found images boxed within rectangles — and signal a solidarity in sound foraging. Aside from the odd vinyl or CD release, that semi-uniformity reminds me of a few labels — Hausu Mountain, Stunned, Tranquility Tapes — that similarly draw me into every cassette.

"I wanted to take my time with projects. I wanted to slow down the process some. I wanted to learn to wait more," Sage wrote in a June 14 newsletter about the genesis of Patient Sounds. "As if waiting is a kind of action; I truly believe it is now, especially as music production and consumption has accelerated; waiting has become a lost art."

It's that kind of waiting — the patience right there in the label's name — that resonated with me as a listener. But that waiting also understands when things should end. After ten years, Patient Sounds has just released its last batch of tapes, including Sage's own Bias Folklore, a bubble bath bog of komische bliss and glitchy twee. Recording under the name M. Sage, this tape is far more playful than — but just as headphone-rich as — this year's Catch a Blessing. Collaged in bright and fantastical colors, I want it to soundtrack my next D&D campaign.

Deathprod's first album in 15 years, Occulting Disk, smothers dank, dark drones around the void of your soul, like a frozen hug from a cyborg teddy bear.

The Angelus, "The Young Birds"

Redemption often comes at the hands of something bigger than yourself, but as The Angelus' soul-rattling doom-gaze reminds us, the love of young children will make you humble.

Azar Swan, "The Hissing of a Paper Crane"

Zohra Atash and Joshua Strawn narrate the charred remains of memory with ominous sibilance. As desperation grows, so does the noise climax in a wall of harsh synths and distorted melody as Atash screams, "There is no justice / There is no justice."

What does Zao, one of the most feral bands in metal for 26 years running, sound like in the hands of a synth-pop group? Remarkably, Goblin's Suspiria soundtrack twisted into gossamer body horror. Reformat/Reboot, a complete remix of 2016's The Well-Intentioned Virus, is gonna be wild.

Cristina Quesada, "I Think I Heard a Rumor"

Madrid's Elefant Records has no less than six labels attached to its Spanish pop empire. I've found myself going down rabbit holes of rare twee-punk, stylish guitar-pop, dub-house, bubbly pop-punk and Spanish-sung J-pop (no really), digging them all. But Cristina Quesada is perhaps most emblematic of Elefant's aesthetic: multi-lingual, ultra-chic dance-pop with super-smart synth arrangements and songs written by Joe Moore (The Perfect Kiss, The Yearning). Like, say, Saint Etienne, Quesada and Moore embrace fantastical swirl of pop music history.

Speaking of Spain, Madrid's punk scene is out of control. Rata Negra, Wild Animals, Runa and WEAK have all been in regular rotation and I'm pumped to add the high-energy, melodic power-punch of Heksa.

The sound of a two-liter Coke sesh on a Friday night with friends; in other words, extremely pop-punk.

Groove is in the heart, but make it metaphysical: "Space is a position of bodies / Time is an accident of motion / Motion is a consequence of all activity."