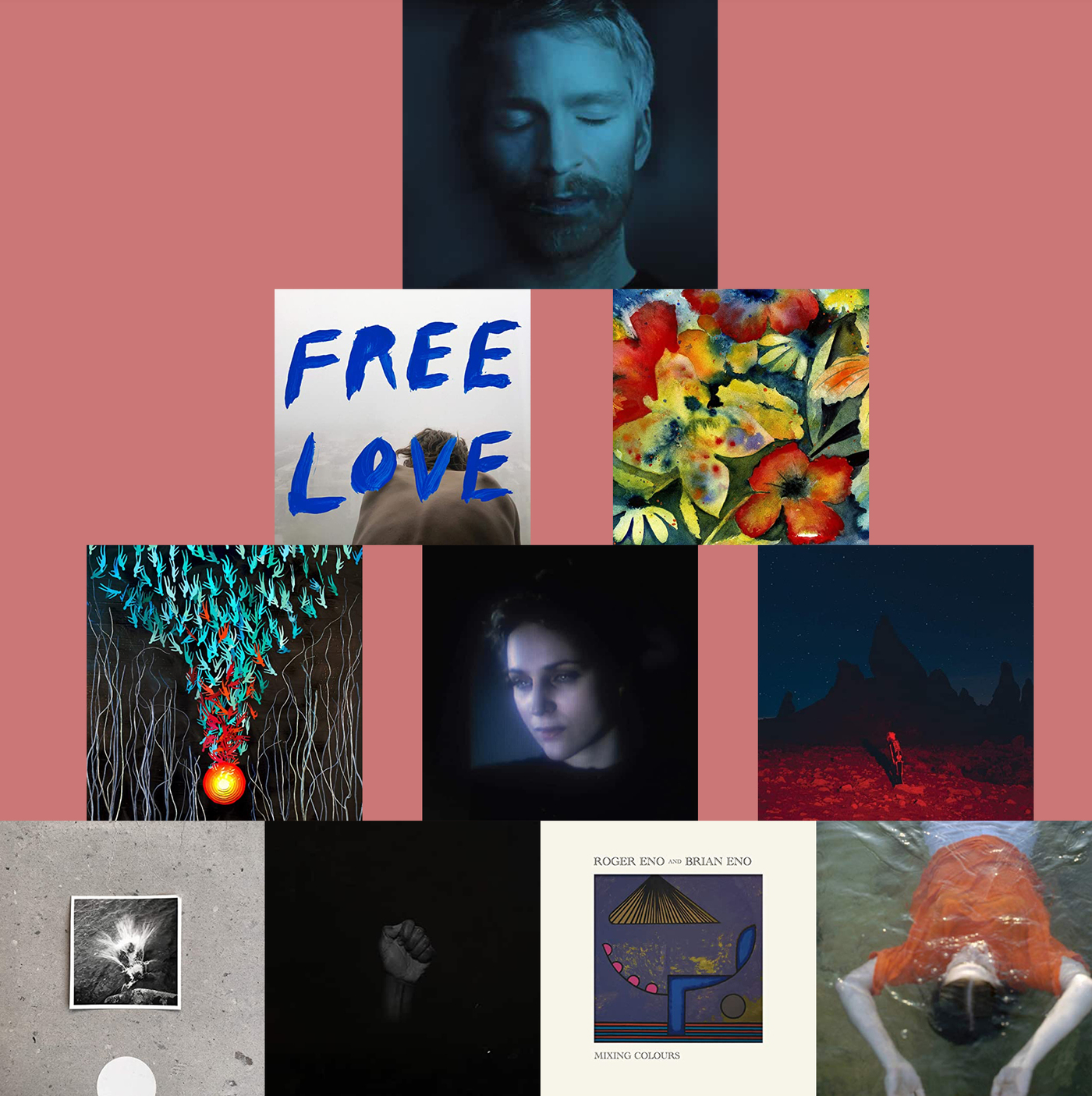 Courtesy of the artists / Photo illustration by Bob Boilen / NPR

It wasn't until I took the time to think about it that I realized how much of the music I loved in 2020 was by artists who I already knew, most making calming sounds.

Let's start with the list itself. At the bottom of this post you can find streams of each album.

My listening habits changed drastically in 2020. Most years, I see about 500 bands live. Of those 500 bands at least 150 are usually artists that are new to me. I love feeling my body washed by volume. It's tragic what's happened this year. I miss live music and the feelings of joy, community and discovery that come with it.

In isolation, I did come to love my creative time at home. I made five albums this year — two of them, Hidden Smiles and Further Under Covers, were ambient albums; the three I made with my band Danger Painters, guitar and drum-based, were rock without the roll. They were all done sitting at my desk, no one in the room but me. And so I made more music than ever, and as a consequence listened to less music by others than in any year I can remember.

When I did listen to music, it was usually while cooking or reading or out for a walk. What I loved were records that felt like embraces, not howls. Ólafur Arnalds, the Icelandic composer, was most inspiring. Some Kind of Peace is centered around Ólafur's melodic piano, and it's packed with passion but has an aura of calm. His songs work for me as background music, but the intricate textures also make the perfect headphone album. (In fact, I used some of his music software, called Stratus, to make my music.) I feel similarly about Agnes Obel's Myopia,Roger & Brian Eno's Mixing Coloursand Nils Frahm's Empty.

I was thrilled to have new music from past favorites: Bright Eyes, Phoebe Bridgers and Sylvan Esso all explored rich sonic soundscapes with lyrics that reached deep. I had zero patience for the old, angsty, "I need you/I don't need you" lyrics that have always annoyed me in the past and now felt more trite than ever.

Adrianne Lenker is the polar opposite of that, such a great songwriter. Her album, titled songs, is steeped in imagery but is spacious and simple in its accompaniment.

The two artists on my list that were "new" for me, that I'd never spent much time with, were Sault and Gia Margaret. On the first of Sault's two albums of 2020 it was again the words that I connected with. Untitled (Black Is) expressed the Black experience in a way both confrontational and composed. A completely new and refreshing approach in attitude and tonality.

And then there was Gia Margaret and her album Mia Gargaret. It was an album of reinvention, a record created after she lost her ability to sing. Her instrumental and spacious worlds, sometimes filled with spoken word, cut-up samples, is a record of exploration. It's an album trying to navigate a world absent of something she took for granted: in this case, her voice. Hearing her find her way in a world, in a year, filled with the new and the unfamiliar, in solitude, felt quite familiar, and I'm sure I'm not alone.

1. Ólafur Arnalds, Some Kind of Peace

6. Bright Eyes, Down In The Weeds, Where The World Once Was