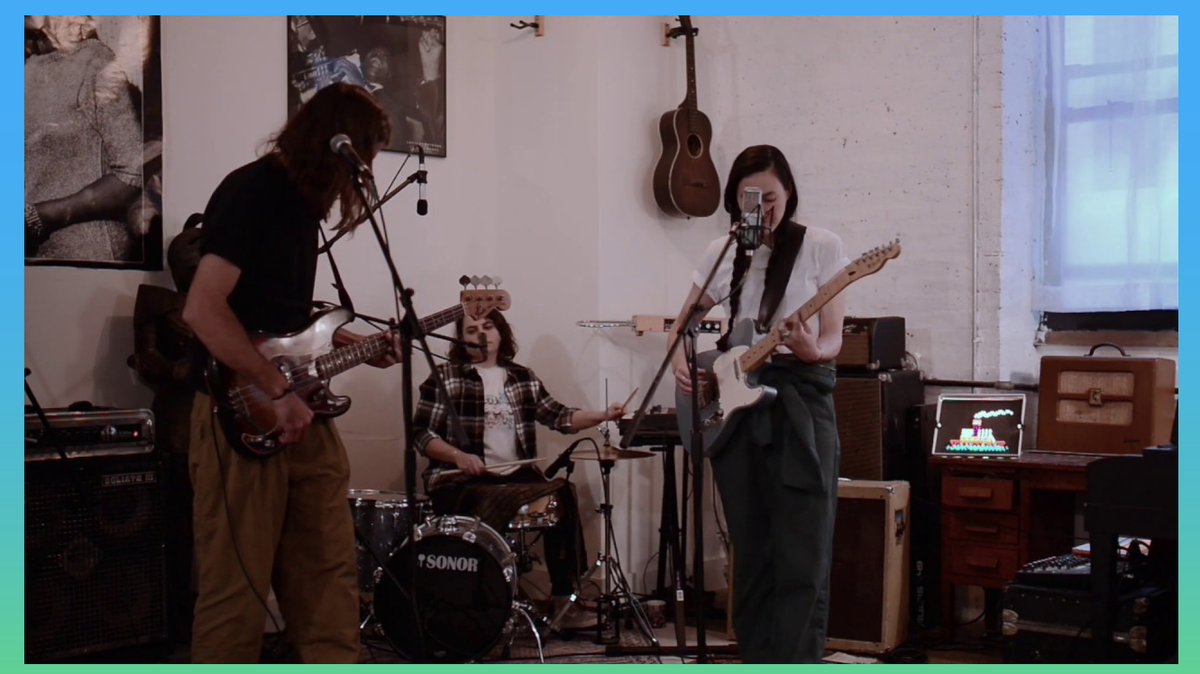 The 2020 Tiny Desk Contest closed for entries on April 27. We've seen entries from every state in the country; from big bands and solo artists; and from a huge range of styles and genres — and now, our judges will start to comb through our entries to find a winner.In the meantime, we've been sharing some of favorite entries to this year's Contest.

Hometown: Brooklyn, N.Y.
Pairs well with: A strong drink after a long day; staying up until 2 a.m. reading your horoscope

Darling Din calls "Velvet," the song in its entry video, "a capricious screed in punk's wool." The song lurches between a swaying, subdued mood and moments of driving insistence with Lisa Jaeggi's rich voice shifting gears seamlessly and the rest of the trio in lockstep. It's a song that makes you grateful to be along for the ride. —Marissa Lorusso

Wallice's entry, "Seabound," opens with songwriter Wallice Watanabe sitting beside a small desk, nestled in tall grasses between lilac-colored wildflowers and an orange tree. The song's sonic landscape is just as lovely as the visual, as Wallice's awakening sound paints a portrait of self-discovery. —Elle Mannion

Hometown: Saratoga Springs, N.Y.
Pairs well with: Rainy walks in the forest; doing something for yourself

"Fighting a Mind That's Been Sold" is all about new beginnings. The simple, arpeggiated foundation recalls the first steps on the narrator's "roads to find home," and layers of Leah Woods' voice complete the picture. Woods sings through the journey of a relationship's painful end, eventually landing at a hopeful turning point in the song's bridge, declaring, "I want to dance on my own / I want to let it all go." Fans of Maggie Rogers and Sylvan Esso will cheer Woods as she reaches this resolution with a lush combination of her natural voice, electronic beats and evocative lyrics. —Allie Prescott

Brionne Aigné, "I Got It"

Hometown: Denver, Colo.
Pairs well with: Giving yourself a pep talk in the mirror; your most confidence-inspiring outfit

In the first verse of "I Got It," Brionne Aigné raps, "I want a classic / I just sample myself." It's a microcosm of the effortless confidence that she brings to her entry, which is packed with silky smooth flows and clever wordplay. That line is also true: Aigné really did build this song off of a vocal sample of herself. —Jon Lewis

Liz and the Lovelies, "The Great American Chestnut Tree"

Hometown: Chicago, Ill.
Pairs well with: Curling up by the fire; thinking about what could have been

Liz Chidester of Liz and the Lovelies has entered the Tiny Desk Contest each year since its inception, so it shouldn't come as a surprise that she found a way to enter this year too, even though she was quarantined on a cruise ship away from her bandmates. The lulling and exquisite entry, "The Great American Chestnut Tree," tells an ominous story, showing us that there is beauty in sadness. Chidester begins with a whisper that is later shattered to pieces as her voice is filled with fervid emotion. —Elle Mannion

The Accidentals, "The Line"

With daily commutes halted and the human impact on the environment diminished, nature is slowly returning to city streets across the globe. The Accidentals' entry "The Line" is an illuminating call for resiliency, recognizing the beauty and possibility in this natural shift. The video's description summarizes: "It's about noticing birdcalls, watching the sky change and trying not to take any of it for granted. It's about having time to just be still. The silver lining in all of this is: In the space while we were gone, nature was thriving. Maybe we can enter that space more carefully now that we have seen the difference." —Pilar Fitzgerald

Hometown: Minneapolis, Minn.
Pairs well with: Staring out a window on a sunny day

For his entry "Free of Woe," Chris Harrington broke out his hammered dulcimer, an instrument that exists somewhere at the midpoint of the harp and the xylophone. The combination of the percussive sound of the hammers and the echoing reverberations of the strings create a daydream-like sound, perfect for a daydream of a song, all about pondering a better, less stressful world. —Jon Lewis

Bodie's Tiny Desk Contest entry "Coffee" has the kind of chorus that can get stuck in your head all day. Bodie's energy is contagious, his falsetto is incredibly smooth and his eventual belting of the chorus will give you goosebumps. The band may be physically apart, but their music is brought together flawlessly, with the keyboardist, guitarist and drummer entirely in sync and vibing together under Bodie's voice. —Jill Britton

A.Rob's entry "Sometimes" is a prime example of music as therapy. Laid out with laid-back flow, A.Rob serves us his inner monologue line-by-line with total honesty and vulnerability. As someone hearing his music for the first time, there's comfort in his contemplation of questions we all face, and in his confidence with being vulnerable, especially in a genre of music that often puts a spotlight on ego. —Pilar Fitzgerald