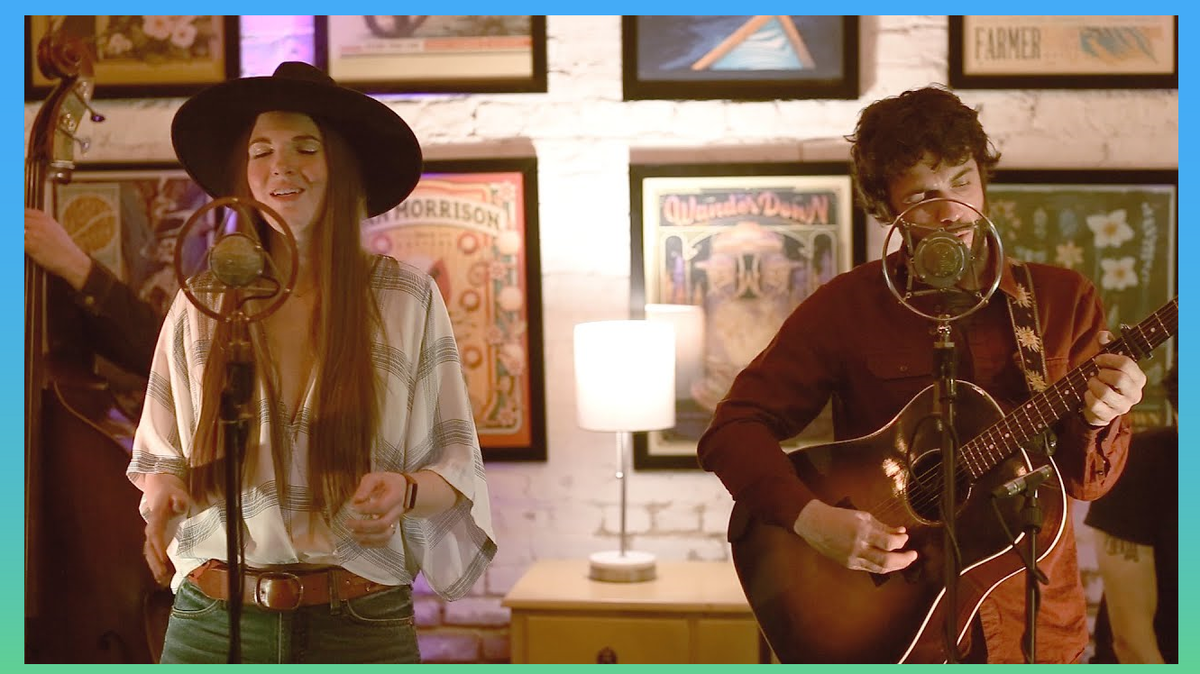 Over the last few weeks, we've been sharing some of the many 2020 Tiny Desk Contest entries that have caught our eyes and ears. We recently extended our deadline for entries: You now have until until 11:59 p.m. ET on April 27 to enter the Contest. Check out a playlist of all the entries we've featured on the blog on YouTube — and if you think you've got what it takes, you can check out the Official Rules and fill out the eligibility checklist, then film your video and submit it here.

Sweet serenity — these are the first words that come to mind while I listen to MaryLiz's entry. The song, which the artist says is "about feeling lonely in unusual circumstances whether you're in a relationship, out in public, at a concert, etc." starts soft and slow, deliberately building its way towards a balancing act between overthinking and finding peace of mind. This message may resonate with us all a bit more now than ever, so I encourage you to listen along and discover your own path towards feeling at ease when faced with loneliness. —Tolu Igun

We admire the resilience of Illinois-based Stone & Snow, who has now entered the Tiny Desk Contest five years in a row, and are happy to welcome the band back with open arms. The band's multi-genre sound pulls from folk, indie rock, swing and soul — somehow stitching it all together seamlessly in its swaying entry, "Cruel." Vocalist Karen Bridges' radiant voice tells a tale of growing weary by cruel loving, but declares valiantly in the end: "I've been standing on my own two feet long before I stood with you." —Elle Mannion

Hometown: Portland, Ore.
Pairs well with: Dancing away from your mistakes; Amping yourself up to sing "Maps" at karaoke

J. Graves says its song "Eleven" is about "reckoning with guilt, loss and acceptance"; it's a heavy topic, set against the band's appropriately thudding garage-rock sound and singer Jessa Graves' passionate and powerful voice. Filmed at Myna Bird Studios in Portland, Ore., the entry video shows off the band's tightly-coiled performance energy and the studio's great taste in houseplants. —Marissa Lorusso

Seattle band Antonioni's entry, "Mary Bell," sounds and feels like a fuzzy '90s flashback fever dream, complete with one of those mini square TVs everyone seemed to have in their kitchen back then. The lyrics are stark and expressive as singer Sarah Pasillas murmurs, "Some call May, some call Mary / I can't even call myself alive / But only in the sense of / Living through a living hell inside." This entry packs a punch with a raucous guitar build-up to an abrupt ending that leaves us wanting more. —Elle Mannion

Hometown: Riverside, Calif.
Pairs well with: Contemplatively staring out of a window

Lots of artists include house plants in their Tiny Desk Contest entries, but few have as many as Hunter Lavender. The wall of potted plants is also a perfect aesthetic match for the song itself: a dreamy journey of a shoegaze jam about self-discovery and uncertainty. Full of layers of floating guitar effects and crooning vocals, Hunter Lavender's music makes you want to take a minute to nurture your own houseplants and think about your past and future. —Jon Lewis

Unit One, "See You Soon"

Hometown: Boston, Mass.
Pairs well with: Counting down the days; Crying on your couch to the boygenius Tiny Desk

If you have to be stuck inside, it's nice to be stuck with friends – which is the case with the band Unit One, who says it filmed its Contest entry "in our quarantined living space (with our quarantine pals.)" Its song "See You Soon" is, fittingly, a tender ballad about being separated from someone you love; singer Rachel Moon gives the lyrics a lovely, calming delivery until the song picks up steam for its cathartic final minute. —Marissa Lorusso

Hometown: Pittsburgh, Pa.
Pairs well with: The peak of your cardio workout; throwing whiskey on the bonfire

In what looks like an abandoned church, Espy James Jr. summons the power with its entry "Whiskey Walkin.'" Lead singer Steven Pierce-James cries out, the band drives on and together all the members fill the cavernous space with a thumping heartbeat of sound that grows with each repetition. There's a visible sense of unity in this group, and the camerawork gives the audience a moment with each instrumentalist as they drive together towards the finish line. —Pilar Fitzgerald

Britton and The Sting, "Blackstronaut"

Hometown: New York, N.Y.
Pairs well with: A dance party in your apartment

Britton Smith — the lead singer of Britton and The Sting — is also a Broadway star in his spare time, but you don't need to Google his name to see how comfortable he is commanding attention on stage. Throughout this entry video for "Blackstronaut," Smith is constantly moving and dancing and drawing you into the performance, aided by an infectious keyboard line and killer backup vocals. Just try not to clap along with Smith and the band when they get to the breakdown before the final chorus. —Jon Lewis