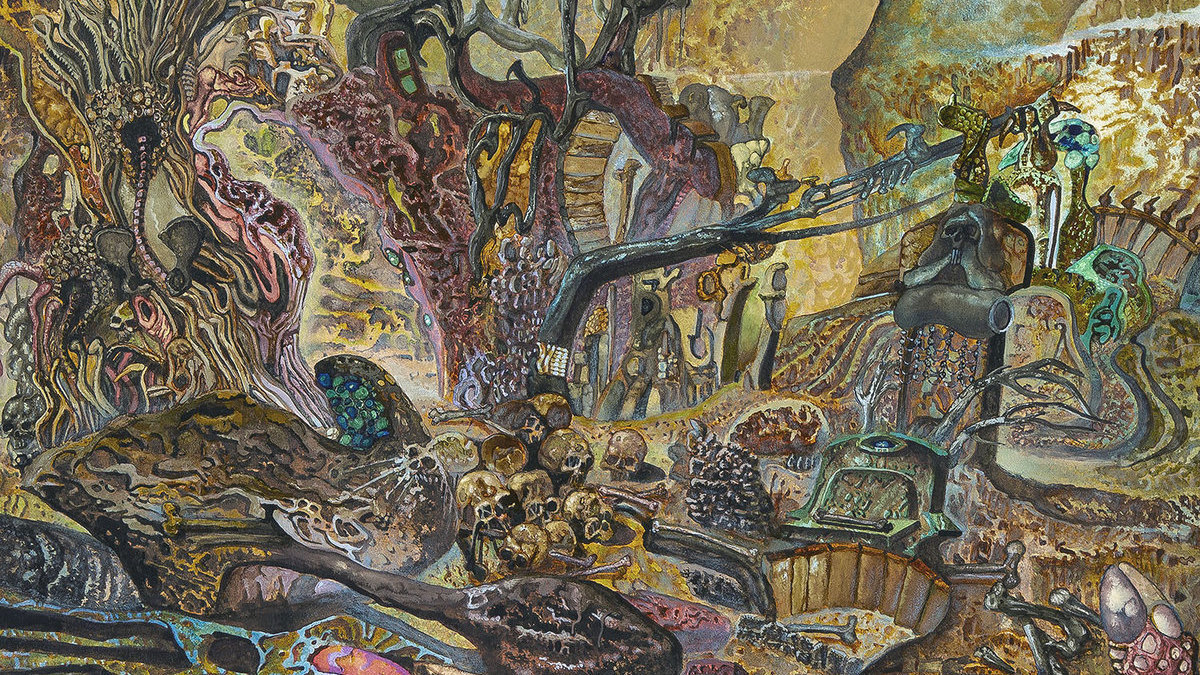 Listen to this playlist on Spotify or Apple Music.

Arizona's Gatecreeper has helpfully titled its new album, Deserted, for every music critic on deadline.

[Extremely monster truck rally voice] Prepare to be destroyed by a sandstorm of sick riffs ... That's no mirage, it's metal by death ... No blast beats here, folks, just sandblasted brutality ...

Since 2013, Gatecreeper has wielded a no-frills, old-school death metal indebted to both masters Swedish (Entombed, Dismember) and Floridian (Bolt Thrower), with thick, HM-2 pedal-worshiping riffs that buzzsaw through your screaming soul. There's no shortage of this stuff, as my inbox can testify. Gatecreeper's ruthless self-editing, however, gives the illusion of simple music, when the purpose of each moment on Deserted is command.

"Everlasting," in particular, is a metallic masterclass in concise songwriting, where each rumbling riff is calculated to dominate, with a melodic guitar solo that doesn't last more than eight bars, yet lingers as the song barrels forth in a mid-tempo fury. A short, but crucially catchy hook leads the way for "Boiled Over," but disappears into the doomy muck only to reappear like a triumphant refrain. "Puncture Wounds" throws some rock and roll swagger into the mayhem, but, again, retains the thrash intensity in spurts for maximum weight.

Deserted is perhaps best served by another metaphor: The classic American diner. There's a skill to the basics that comes with experience and attention to detail. Too much time on the skillet and those perfect yolks turn to chalky yellow mounds. Beat the batter into submission and that poor pancake is rendered lifeless before it even hits the heat. Gatecreeper writes memorable songs because the band understands its death-metal history, but also knows that a well-crafted verse-chorus-verse format keeps everyone bangin' on. Order up, y'all.

While I try to think of dumb puns for death metal-themed diners, here are my favorite finds on Bandcamp for the week. (Note: Some of these tracks can only be found on Bandcamp.)

Twink's Think Pink turns 50 in 2020. If you haven't heard this trippy apocalyptic psych-rock record, please click away and dip out for a bit. John Alder — who drummed for British psych bands like Tomorrow, Pretty Things and Pink Fairies — has recently returned to the wild pink. If last year's Think Pink III explored Alder's loner-folkie side, then Think Pink IV: Return to Deep Space — featuring members of Moths & Locusts, Sloan and Wolf Parade as his Canandian backing band — sees the 74-year-old absolutely rip into the unknown with heavy psych.

Stare into the terrifying artwork for Kohti Tuhoa's Ihmisen Kasvot — forks stabbing eyeballs, rats climbing into a city landscape/mouth, doves nesting in a decaying head — as the Finnish hardcore band's dystopian nightmare speeds through your skull with whiplash riffs and searing feedback.

For someone who wasn't supposed to play guitar ever again — after suffering a brain infraction in 2014 — Takafumi Matsubara (Gridlink, Mortalized, Retortion Teror) has once again blasted grindcore to some next-level shred. The perfectly titled Strange, Beautiful and Fast is only 34 minutes long, but you feel every annihilating riff, twisted hook and exhilarating collaboration with over 30 grindcore musicians worldwide.

Led by Lebanese DJ and musician Rabih Beaini, Upperground Orchestra hangs in the ether of Kieran Hebden and Steve Reid's rapturous mid-2000s experiments. The Venetian group stitches heady electronic clicks, washes and whooshes in and out of its heart-racing free jazz.

Totally lost track of this experimental Melbourne duo and it's time to catch up. Over a decade past self-titled its debut, Fabulous Diamonds' motorik dub narcosis now drips, sticks and cracks like glow-in-the-dark glue.

What if Lemmy had injected, like, a whisky-handle full of Hawkwind-ian space-rock into Motörhead? Bless this Norwegian metal band for the cosmic and crusty answer.

Easily the most unhinged track from Witch Mountain, yet, as guitarist Rob Wrong's bluesy doom-metal riffs collide with a hard swinging rhythm section like a carousel slowly spinning off its axis. "I'll be sending you back to God / Welcome to the reckoning," singer Kayla Dixon warns of an extraterrestrial takeover to atone for humankind's environmental sins.