Wound List from 1979 could split open a third eye. Courtesy of the artist hide caption 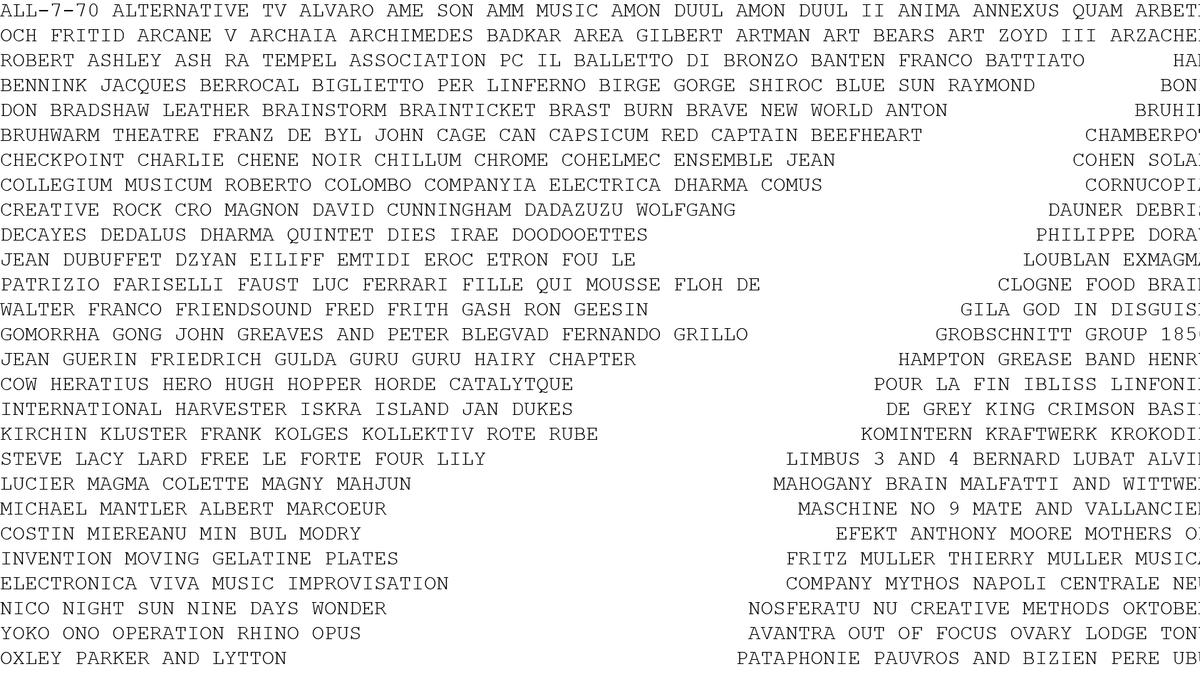 Be it prog-rock, free jazz, musique concrète, Krautrock, deranged punk or psych-rock, the experimental music found on the Nurse With Wound List from 1979 could split open a third eye.

Listen to this playlist onSpotify or Apple Music.

The fastest route to obsolescence is telling y'all that it was better in ye olde days. The truth is that while the mechanisms for music change — rapidly nowadays, it seems — the motivations for discovery don't. You dig because ya dig, you know?

That said, with digital music's rise over physical media, we've lost liner notes — not just lyrics and layout, but the thank-you section where artists nod to other artists, friends and influences. This is how I found out what my favorite punk bands listened to and promptly made shopping lists the next time I hit up a record store. Not every blind purchase was a winner, but there was a soul-to-soul connection. Is an Instagram Stories shout-out the blink-and-you-missed-it modern equivalent? I don't know and I don't judge.

When the British industrial band Nurse With Wound released its debut album, Chance Meeting on a Dissecting Table of a Sewing Machine and an Umbrella, in 1979, it came with an insert that featured the names of 291 artists that acted less like a thank-you list and more like an anarchic bibliography of the avant-garde. I dug into the "Nurse With Wound List," as it came to be called, in the mid-2000s as a peer-to-peer network nerd on the hunt for obscure music: Amon Düül (and Amon Düül II), Karlheinz Stockhausen, Univers Zero, Magical Power Mako, Henry Cow, Debris', Franco Battiato, Taj Mahall Travellers, Iannis Xenakis — decades of radical music made by radical people.

Nurse With Wound would become a force of the avant-garde itself, but the colloquially named NWW List developed a unique culture of its own. Record stores and mail order sites like Aquarius Records — which I celebrated on last week's column — would send up a flag whenever a new reissue of an out-of-print, NWW List-approved artist would appear. Sharity blogs would tag MP3s "NWW List" even if the connection was tenuous at best, or just flat-out false. It became shorthand for a certain strain of cracked music — be it prog-rock, free jazz, musique concrète, Krautrock, deranged punk or psychedelic music — that could split open a third eye.

Strain Crack & Break: Music from the Nurse With Wound List finally settles what specific pieces of music that members Steven Stapleton, John Fothergill and Herman Pathak intended when they created that insert 40 years ago. This first volume, of hopefully many to come, focuses on the wild sounds coming from France, from the swinging plink-plonk jazz-noir of Jacques Thollot and Igor Wakhévitch's horror grooves to the psychedelic freak-jazz of Red Noise and Pierre Henry's quietly haunting soundscapes. Strain Crack & Break barely scratches the surface, but comes with extensive liner notes about the music selected, appeasing decades of ravenous followers, but perhaps breaking in a new generation.

The Bandcamp picks (and one YouTube Clip) on this week's column have little to do with the NWW List — to be honest, I'm playing catch-up on a ton of new music — though y'all can think of Viking's Choice as the NWW List's lil' pop-punk cousin from a third marriage. (Note: Some of these tracks can only be found on Bandcamp.)

Is Buck II: Where Do You Want It? a noise record for cowboys or a cowboy record for noise nerds? Hiccuping pedal steel glitches like a sunset in an 8-bit NES game, there's lonesome whistlin' over droning field recordings, a harsh-noise stampede and, like "Bell Jar of Whiskey," genuine affecting ambient-country ballads sung through vocoder.

How does this song know that I needed Broadcast's monotonic mood, Life Without Buildings' jagged guitar and Pylon's mutant post-punk groove all in one place?

Now that's a boot-stompin', gristle-chewin' riff if I ever heard one. Four albums in, the Minneapolis trio Buildings adds some surf-punk detritus to ride out the noise-rock gruel. Hang ten, my dudes, and watch out for toxic waste.

Chastity's Brandon Williams punches through a roaring, stadium-rock riff like his life depends on it, throttling around the bend just before diving off a cliff. But he pulls back to deliver the message: "Making a killing / Is taking on new meaning / When you're fighting / When you're dying for something."

There's a cathartic campfire quality to these stripped-down songs from Sheena Ozzella (Lemuria), Anika Pyle (Katie Ellen, Chumped) and Augusta Koch (Cayetana, Gladie) that is at once intimate and open. Healing music from three distinct voices of modern punk and indie-pop.

Weeping Sores is pretty dang good at suffocating riffs and fathoms-deep growls, but death and doom metal can be pretty, too, you know. The New York trio best incorporates violin when it channels Codeine at a funeral march pace.

After a few sangin' albums, Ryley Walker's been dippin' his toe back into instrumental guitar music and it's a real dang treat to see both sides develop simultaneously. This quiet-yet-busy rambler with drummer Charles Rumback sounds like it could've appeared on ECM Records LP with rolling fields painted in pastels on the cover.

Nostalgic for '90s house breakbeats, hypercolor in emotion. This is rhapsodic rave music in the feels of bodies moving as one.

Jim O'Rourke, "The no next to our names means we can not recommend you see The Awakening"

Keiji Haino / Jim O'Rourke / Oren Ambarchi, "In the past only geniuses were capable of staging..."

Y'all get a double dose of O'Rourke and absurdly long song titles today. A slow-moving, side-long piece that builds like a cloud of billowing ash, its eruption a sudden squall of Keiji Haino's guitar splatter, O'Rourke's fuzz bass and Oren Ambarchi's chaos drums. Unlocks ecstatic realms from this long-running trio.