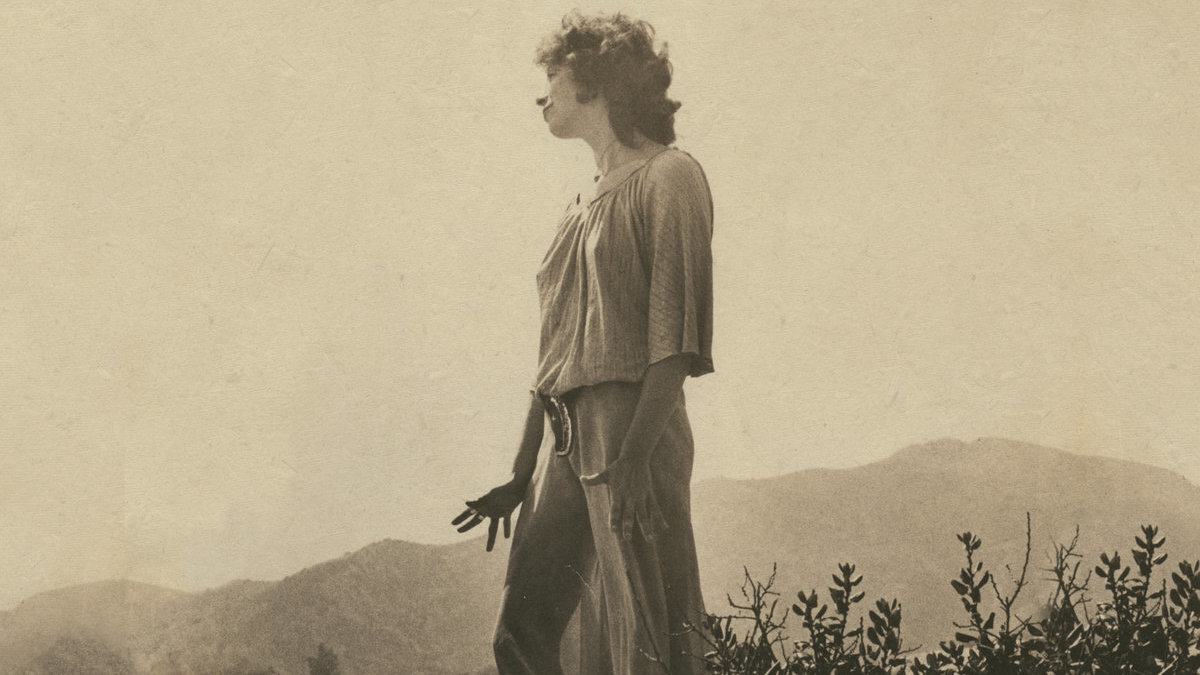 Elyse Weinberg rolled with Neil Young and Joni Mitchell in the late '60s, and released only one LP before leaving the music industry.

Elyse Weinberg, a late '60s singer-songwriter and guitarist once lost to time and later rediscovered by crate-diggers, died Feb. 20 in Ashland, Ore., after battling lung cancer. The news was confirmed to NPR through both her label, Numero Group, and close friend, Satya Alcorn. She was 74.

In 1968, Weinberg released Elyse, a psychedelic and ramshackle folk-rock record that followed a tangled dream-logic of melody and tempo, led by a raspy voice floating in its rhizomatic orbit. A little over three decades later, Elf Power's Andrew Rieger found a copy of the the record in a dollar bin; entranced by (and likely finding a twisted, Elephant 6-style camaraderie within) its charms, Rieger and his bandmate, Laura Carter, reached out to Weinberg and subsequently reissued the album on Orange Twin Records in 2001.

For a time, that reissue — its artwork scanned from a worn LP, featuring a couple of extra songs and little context otherwise — was all we knew about Elyse Weinberg. But the mystery, as it often does, helped her mystic-music: As word spread, artists like Vetiver, Dinosaur Jr. and Courtney Barnett all covered "Houses." (Neil Young played on the original; he plugged directly into the board for some gnarly guitar shred, but was uncredited on the reissue's back cover.)

In 2015, Numero Group, a Chicago label that digs — quite successfully — for lost or forgotten sounds, released a discarded 1969 session of Weinberg's as the album Greasepaint Smile. On it, she's joined by Neil Young (for "Houses"), J.D. Souther on drums, Kenny Edwards (Stone Poneys) on bass and guitarist Nils Lofgren (E Street Band, Crazy Horse) for a dustier, scuzzier rock and roll record. Sometimes it's funky ("City of the Angels"), sometimes it hits the honky-tonk with a David Crosby swagger ("It's Alright to Linger") and sometimes it choogles (the delightfully flirty and forward "Your Place of Mine"). But it's always tender. You can feel the room in every Elyse Weinberg song — her voice both directs and reacts to shifting moods and rhythms with unpredictable force, yet the music always finds its wild resolution.

These unearthed recordings also helped fill in the gaps of her biography. Born Oct. 25, 1945 in Chatham, Ontario, Weinberg learned to play guitar by slowing down reel-to-reel recordings of Greenwich Village folkies like Phil Ochs, Eric Andersen and Dave Van Ronk. "Weinberg graduated from Toronto folk clubs to crashing on Neil Young's Laurel Canyon couch to the Billboard charts within one prolific year," the liner notes to Greasepaint Smile illuminate. She was mentioned in the same breath as Joni Mitchell and Laura Nyro, and "Mama" Cass Elliot (later of The Mamas and The Papas) was an early champion.

"I hear a young woman wanting to be loved," Weinberg says in the Greasepaint liner notes, reflecting on her early work. "I hear a spiritual yearning for a higher love. I know it now, but I didn't know it then."

But after too many bad brushes with the music industry, which included a label bankruptcy, a broken deal and a Cher-starring flop of a movie that featured a cover of her song "Band of Thieves" (erroneously re-titled, with songwriting credits going, for some reason, to Sonny), Weinberg left L.A. and the scene altogether, eventually settling in rural Oregon, quietly making music through the '90s and, after developing an interest in numerology, changing her name to Cori Bishop.

However, a newfound love at the beginning of the millennium inspired Weinberg to start performing again. Released in 2009 under her old name, In My Own Sweet Time is a lovely melange of folk, country and western swing still tinged with ache, but perhaps a bit sweeter with age.

Elyse Weinberg found another path in life, but music not only found its way back to her, but to younger fans eager and sympathetic to Weinberg's whims and wisdom.

The Native Cats, "Run with the Roses"

"I'd like to dedicate this record to Scott Walker." Oh, Chloe Alison Escott, you've now got a direct line to my heart. In writing about the Tasmanian post-punk duo's new 7-inch, she continues, "I've spent my entire adult life both studying his music as a sacred text and giving myself over to it as a transcendental experience." The stark synths and percussive bass strip the track down to its essential noise, as Escott lays her life on the line in abstract, but extremely personal lyrics.

Beauty Pill, "So Dark Blinking Makes No Difference No. 2 (Minimal)"

Beauty Pill works in ten-year cycles, it seems, and this score to a theatrical play is no exception. While there's a content warning affixed to Taffety Punk's suicide.chat.room — first produced for the stage in 2010 — the music here abstracts the heavy content and themes. Chad Clark's soundtrack is delicate and wounded, mostly instrumentals based on carefully layered electronic loops, sweeping strings and glitched beats — an immersive sound experience, delivered with care.

Bless the heavy metal doombringers of old, for they shall ravage the earth. From Forever Black, its first album in 29 years, Cirith Ungol returns with a grizzled, ravenous power.

The auto-tuned sound of knives melting and reconstituting as demented beats. A collaboration between Welsh producer Elvin Brandhi and the indescribable Nyege Nyege collective out of Uganda, Villaelvin's debut is absolutely mental.

The New York post-punks simultaneously sharpen and soften their edges — the spiraling guitar riffs remain, as does the clipped and crisp drumming, but there's a B-52s-inspired beehive pop haze surrounding the self-reflection.