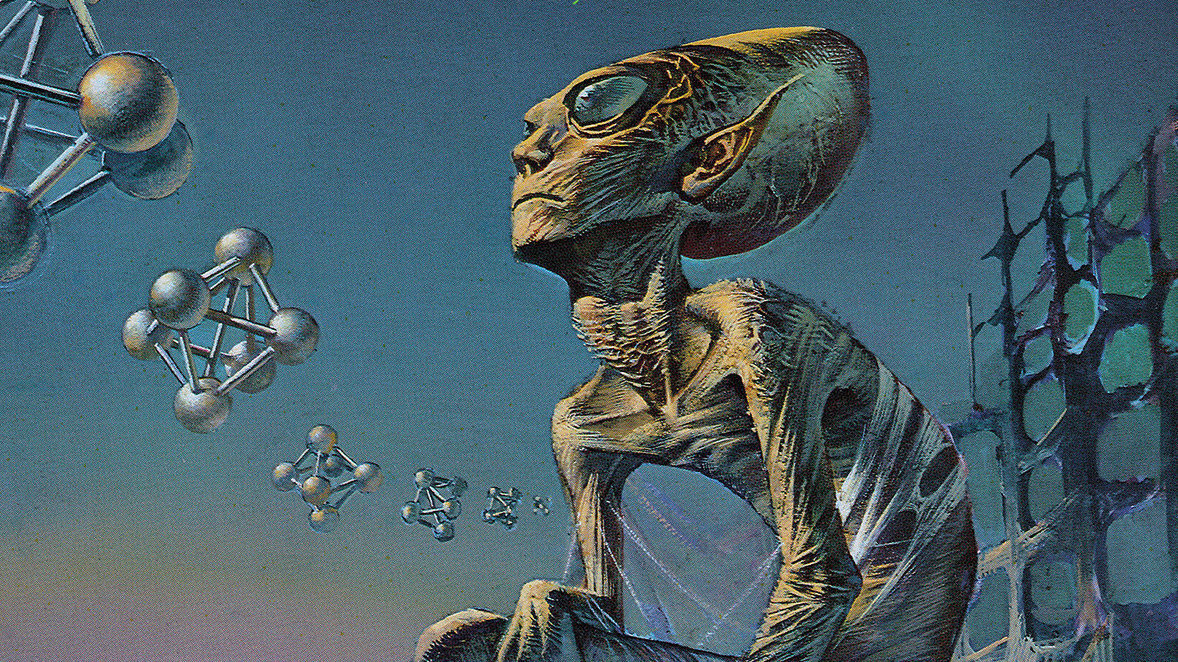 We are made of star-stuff. Carl Sagan was a poetic-ass dude, and, by many accounts, he was right. When a star dies, off shakes gas and dust like cosmic dandruff, sometimes creating new stars and planets. Some of that space dust becomes part of living organisms, like us.

But what if humanity had a helping hand... from aliens? At least, that's the theory of Blood Incantation. (Hey, no one really gets mad at Amon Amarth for, almost 30 years later, sticking to Vikings and Norse mythology.) The Denver death-metal band's quick ascent from the underground might be due, in part, to a gnarly-webbed logo and existential lyrics about our puny place in an unforgiving universe. Also, aliens.

Blood Incantation's death metal simultaneously exists in the gaping maw of tradition and the galaxy brain of its future. There's a clear lineage to Morbid Angel, Gorguts, Death, Cynic and Demilich, all bands that established and quickly progressed the music further. Starspawn, from 2016, understood these influences, but Hidden History of the Human Race, releasing Friday, twists these riffs, blasts and deep-space growls into bodies unknown.

On "The Giza Power Plant," guitarists Paul Reidl and Morris Kolontyrsky swap quick-fingered Morbid Angel riffs with a touch of psychedelics. There's a moment, starting around 1:27, when after a chaos-wielding guitar solo, the spine-bending riff returns propelled by a knowing chug. Drummer Isaac Faulk corrals the nasty star-stuff, swirling without order, with a booming drum fill and the riff — renewed, revived, respawned — becomes an interdimensional beast capable of eating worlds. It all happens over 13 seconds, but you just kind of walk around staggering after a moment like that, wondering what the hell happened as Blood Incantation descends into a heady Middle Eastern melody... a moment to recollect your thoughts before being thrust into astral doom.

Crawling slowly and ominously, like a camera across the USCSS Nostromo, "Inner Paths (to Outer Space)" leans most deeply into Blood Incantation's brutal psychedelia, featuring a "guest bluurgh" from Demilich space-burper Antti Boman himself. It sets the tone for what might be one of the most intricate, thrilling pieces of metal released this decade. During its 18-minute run time, "Awakening from the Dream of Existence to the Multidimensional Nature of Our Reality (Mirror of the Soul)," stargates through spiraling death, majestic doom, breakneck thrash, foreboding drone and even closes with a folkloric spin on one of its many melodic themes. Each movement is interconnected by jaw-dropping musicianship and more riffs than most bands write in a career, but Blood Incantation steers the vessel like a space captain set to discover new worlds — or perhaps uncover the mysteries of our own. We are made of starspawn.

A blackened and doomed string quartet doubled by distorted and processed recordings, like a mirror fogged by ghosts. Swedish composer Maria W Horn adds a layer of searing guitar feedback in a rare piece that not only gives mournful impressions of black metal, but contends with its ugliness in shades of icy darkness.

Did someone replace my cup of oolong tea with a nerve-shredding, jaw-ripping energy drink? This Nashville husband-and-wife duo slaps a tar-thick coat of black paint on metal and hardcore with the kind of tension that perversely, manically waits for the release.

For kids growing up in the '90s — hey, that's me! — metalcore meant thrash- or death-metal riffs smashed with hardcore speed (or the other way around), knuckle-dragging breakdowns and a stupid amount of China cymbal... (frequently) recorded poorly. Hard to Be a God is supremely satisfying in that regard, but Russian straight-edge band Vital Forces makes metalcore sound equally primal and present, ripping up the pit.

Guruguru Brain is truly this decade's P.S.F., a record label deep in the heavy trip of the Japanese psych and surrounding Asian outre scenes. Here's another sick find: Tokyo power trio Dhidalah dials into a headbanging hypnosis with cosmic fuzz, mountain-clashing stoner- and space-rock riffs and a motorik throb.

Envy, "A step in the morning glow"

For nearly 30 years, this is what the Japanese post-hardcore band has done best: sweeping, emotional melodies carved into the cliff sides of overwhelming, deafening climaxes. Bands have built their entire careers on Envy's sound, but few weigh majesty and beauty with heft quite like this.