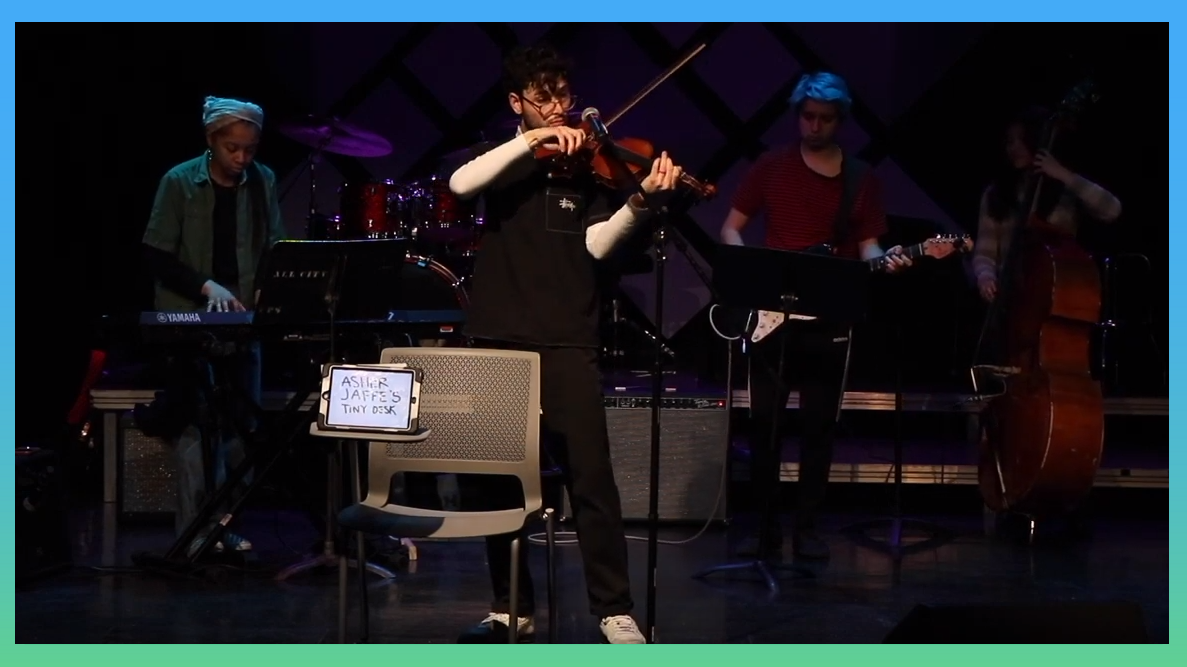 Throughout the next few months, we'll be sharing some of the many 2020 Tiny Desk Contest entries that have caught our eyes and ears. You can enter the Contest until 11:59 p.m. ET on March 30. Check out a playlist of all the entries we've featured on the blog on YouTube — and if you think you've got what it takes, you can check out the Official Rules and fill out the eligibility checklist, then film your video and submit it here.

We're also hoping to hear from unsigned artists who had been planning on performing at SXSW. Let us know via this form once you've entered the Contest; we might feature your video on our blog next week.

Curious about what our Contest judges are looking for in entries? Bring your questions to our Reddit AMA with Tiny Desk producer and Contest judge Bobby Carter at 2 p.m. ET on Friday, March 12.

Shawtoni Nichols, aka R&B singer Mamii, immediately caught my attention with her mesmerizing presence in "I'm All Yours." She professes her feelings with an unmistakable clarity in this stripped-down rendition of a groovy love song, which gives us a glimpse into what a Tiny Desk concert from this artist would look like — no bells or whistles. Come for Mamii's swoon-worthy, smooth voice, stay for her genuine and raw tenderness. —Elle Mannion

The Flying Vees song "Back Up (Mutherf*****)" recounts a straightforward yet fierce message many have felt the need to say while out in public. The harmonies, infused with blues, country and rock and roll, produce an undeniable, energized anthem from this first-time Contest entrant. —Tolu Igun

Ms. Jaylin Brown, "Out Of Time"

"We all have our days, at least that's what they say," sings Ms. Jaylin Brown, with a particular sense of warmth and presence, on the lovelorn tune "Out of Time." Whether the rain is coming down or you're having coffee on a sunny Sunday morning, songs like this one act as a salve for the soul, an anthem for both the downturns and triumphs of life and love. —Emma Bowers

"Love Song" is the type of tune you want to put on after a long day, as Alyssa Hankey's gorgeous voice could be a soothing antidote for any trying inconvenience. With a remarkable Americana sound, the Pittsburgh-based singer humbly asks that you go easy on her heart: "I've been up / I've been down / I been chewed up and then spit out / I've been going it alone / I never learned to dance / but if you give me a chance / I'll give your heart a home." —Elle Mannion

Hometown: Austin, Texas
Pairs well with: Setting the volume on your speakers irresponsibly loud; being told to keep the racket down

Andrew Gray Y Los Colores' entry "Technicolor" takes a sharp left turn. Between the opening shout of "And we're f****** rolling" and the dark arpeggiated guitar chords, the group sets us up for a heavy alt-rock vibe — but then channels that energy into a funky, swaggering, Ratatat-style jam. And in case you're disappointed by that shift away from the heavier stuff, Gray still kicks up the distortion for a satisfyingly intense solo at the end. —Jon Lewis

Right on cue comes Asher Jaffe, sliding and gliding to center stageas smooth as the opening notes of "Alphabet Soup." Accompanied by a lively tune that's sure to make you smile and dance along, Jaffe's play on words points out an essential element he seems to be missing from his alphabet soup: you. —Tolu Igun

What Charlie Wilks does in his song "Waves" can maybe best be described as "narrative acoustic guitar shredding." Wilks is blind, and says that part of his songwriting inspiration comes from hearing descriptions of images. You certainly get that sense here, as his astoundingly dexterous fingerpicking creates an almost orchestral sound that tells the story of a ship setting out to sea, finding a peaceful cove and then heading back into the storm. —Jon Lewis