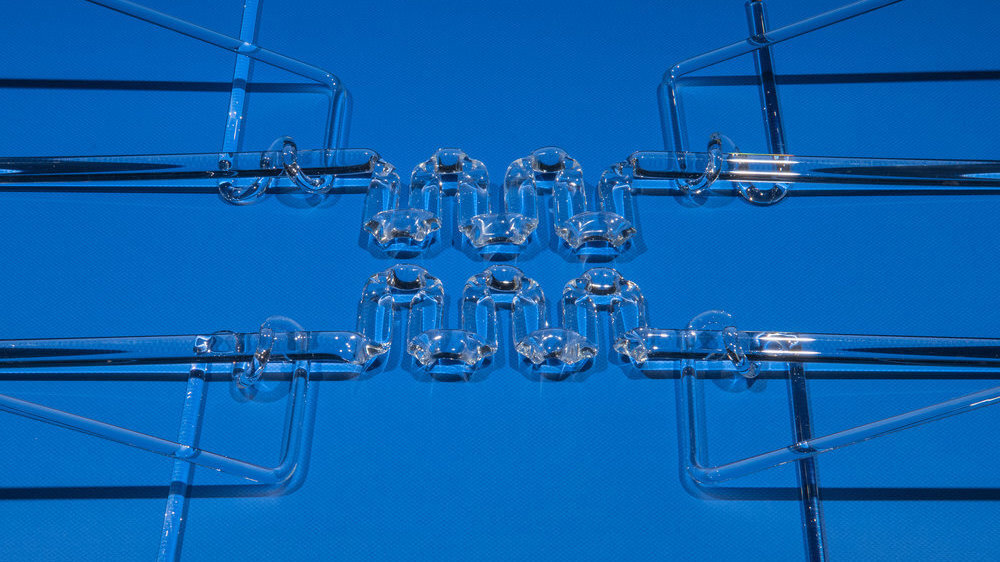 Tauba Auerbach/Courtesy of the artist

When I first started in public radio 13 years ago, there weren't too many peers playing "challenging" music. Here was a 20-something who, up until moving to D.C., spent nights vibrating to Japanese noise and weekends attempting to decode large-format Xenakis scores in the University of Georgia library. NPR Music wasn't even a proper entity yet, and here I was already planning to dismantle notions of what constitutes "public radio music" with brash zealousness. (Hey, I was 23.)

My column Viking's Choice, now a little over a decade strong, didn't come without aches and setbacks because, hey, labyrinthine metal or a sound installation featuring 200 feet of piano wire can be a hard sell to an unsuspecting audience, no matter the support of colleagues. Thankfully, John Schaefer was an unknowing guide (to me) in how to present this music. He's the host of WNYC's New Sounds, a 37-year-old public radio program that not only challenged but grew with its audience; trust was built into the equation, bouncing ears from prepared piano to ambient electronics to Afropop. Folks like to say its cross-cultural, cross-genre mix is distinctly New York; I'd argue New Sounds was prescient in how music would fracture and reconstitute its disparate parts in wild forms.

So when WNYC announced it would "sunset" New Sounds last week, my heart completely sank. Andrew Golis, the chief content officer of WNYC, claimed the shift away from music programming was to "[focus] on news and storytelling. Playlist music is not something that we think is core to WNYC's offerings." This short-sightedness struck me sideways, not only as a music fan, but as someone who hears music as a reflection of ourselves; New Sounds tells the story of music that moves culture forward.

The response from the city of New York, a global community of listeners and station staff was swift and strong. "I know there is new leadership over at WNYC," composer Julia Wolfe told Gothamist, which, like WNYC, is owned by New York Public Radio. "What I think they don't understand is that this isn't just a radio show — it's a cultural institution — it's the voice for creative music here in New York City."

In a rare triumph that shows just how much the public matters in public radio, WNYC reversed its decision on Monday. "We did it! Or more accurately, YOU DID IT!" Shaefer tweeted. "And if we sound incredulous, it's because we never expected to be able to make this announcement."

The weekly playlist on Spotify and Apple Music has been updated and the Bandcamp picks below run a wild gamut, as anyone who follows Viking's Choice knows by now. But if you like the music here and how it's presented, know that there's public radio precedence. Spend some time with New Sounds — or Schaefer's podcast Soundcheck, or the 24/7 stream — if you've never heard the show, or get reacquainted: just don't take it for granted.

Meara O'Reilly has a thing for musical illusions, how the ear and the brain can play with your senses. Hocketing itself is a type of auditory trick going back several centuries and cultures, where two (sometimes more) voices complete melodic phrases note-by-note in an uncanny feat of vocal concentration. This is but a short snippet from her brief-but-sensory-rich 11-minute album, but in it, the two voices (O'Reilly performs both parts) dip, slide and pan your headphones like a bouncy castle set in a cloud level of Super Mario Bros.

Look, for all I know these Spaniards are total sweethearts with puppy-of-the-month calendars who are just their best selves when vomiting pure metallic evil from the bowels of hell. Or, while slurping hot-pink hibiscus boba tea with their besties, they are compelled to unleash a terror so foul that rivers weep blood. I'm not here to judge!

Each beat rings deep in the music of Jon Mueller. Codex Intueri features the composer's most trusted tools — drums, percussion and gongs — but turns over the arrangements, mixing and synths over to James Plotkin. There's a trust there, as Mueller's meditative rhythms both settle and spiral to a ritualistic dance.

Phil Elverum can dig inside a moment and find its most complicated, twisted and truest meaning. Here is what might be the most tender couplet of the year, which I'll carry with me: "If ever the bonfire that I carry around could warm you again / I will be out here in the weather for you glowing."

Jessica Ekomane originally conceived Multivocal as a quadraphonic experience, so just imagine short bursts of polyphonic tone pulsing and phasing around your total being. Don't worry, it works on headphones, too, but you just might levitate until the cord snaps you back to earth.

The Blamed, "I Guess This is Goodbye"

Now here's a blast from my Christian punk past. From 1994-2002, The Blamed evolved from shouty skate-punk to aggro hardcore to a creative palette of switchback riffs, a bruising rhythm section and throttled call-and-response. (2001's Isolated Incident remains a personal favorite.) The band's first album in 17 years, The Church is Hurting People, kinda does all of the above with varying results, but when the feedback-riddled power chords rev at the rumbling speed of "I Guess This is Goodbye," I'm a teenager again, thrashing around my room.

Kyle Landstra / Dominic Coppola, "Earlier in the Morning" & "Later in the Day"

Ambient music sometimes functions best when you forget it exists; the tones just become a part of your day. I've lost track of time staring into the synth abyss of these two tracks.

Baltimore's got a good goth streak going this year: first The Holy Circle, now Curse. For its third album, noise and doom metal-tinged tunes give way to neon synth-pop in ways that will please both Blade Runner and Siouxsie and the Banshees fans.