Yanis Varoufakis: How Capitalism Works - Alternative Radio, Sunday at 10 am 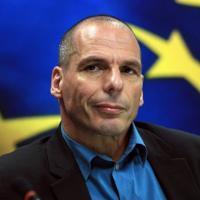 It’s produced a new Gilded Age. The gap between theoretical Capitalism and its actual workings is jaw dropping. The chasm is a far cry from the courses in economics taught in colleges and universities. We are told the system relies on the market. In fact, it depends heavily on government intervention. When the big capitalists are in trouble states are there to bail them out. Really existing Capitalism works for the few at the expense of the many. Look at the Trump tax cut. Epic levels of inequality are not just in the U.S. but are worldwide. An Oxfam report says, 82% of the wealth generated in 2017 went to the richest 1%, while 3.7 billion people, the poorest half of the world, saw no increase in their wealth.

Yanis Varoufakis is an economist and academic. He served as the Greek Minister of Finance from January to July 2015, when he resigned. He is the author of many books including Talking to My Daughter about the Economy.