Robert Fisk: Chaos in the Middle East on Alternative Radio – Sunday at 10am 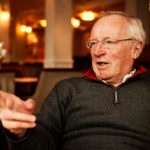 The U.S. invasion of Iraq in 2003 is one of the great crimes in modern history. No one has been held to account. Hundreds of thousands of Iraqis have died, many more wounded and millions became refugees. Washington’s insane action unleashed a cascade of disasters across the Middle East from Syria to Libya and sparked the rise of jihadi groups. But Western intervention in the region has a long history. One can mention the 1916 Sykes-Picot agreement or the Balfour Declaration the following year and right down to the inheritor of European imperialism: the United States. Any country that says no to Washington’s diktats is threatened with “obliteration” as the current occupant of the White House warned Iran. The Empire’s subjects at home, the American people, are largely kept in the dark about what their country is doing abroad.

Robert Fisk, based in Beirut, is the Middle East correspondent for The Independent. He is winner of the Amnesty International UK Press Award and the Lannan Prize for Cultural Freedom. The Financial Times calls him “one of the outstanding reporters of his generation. As a war correspondent he is unrivalled.” He is the author of Pity the Nation: The Abduction of Lebanon, The Great War for Civilization, and The Age of the Warrior.