The news about the pandemic goes from bad to worse. The term another grim milestone in the number of infections and deaths has become almost commonplace. But at some point, hopefully not too far away, the crisis will pass. Where will we be? The world will surely be different.

There is so much uncertainty. Kim Stanley Robinson, the well-known science fiction writer, says, "The future isn’t cast into one inevitable course. On the contrary, we could cause the sixth great mass extinction event in Earth’s history, or we could create a prosperous civilization, sustainable over the long haul. Either is possible starting from now.” 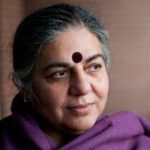 Vandana Shiva is an internationally renowned voice for sustainable development and social justice. She's a physicist, scholar and social activist. She is Director of the Research Foundation for Science, Technology and Natural Resource Policy in New Delhi. She's the recipient of the Sydney Peace Prize and of the Right Livelihood Award, the alternative Nobel Prize. She is the author of many books, including Water Wars, Earth Democracy, Soil Not Oil, Making Peace with the Earth and Oneness vs. the 1%.

David Suzuki, Professor Emeritus at the University of British Columbia in Vancouver, is a leading environmentalist and science educator. He is a Companion of the Order of Canada and recipient of the Right Livelihood Award and UNESCO’s Kalinga Prize for the Popularization of Science. He is the host of the long-running CBC-TV program The Nature of Things. He is the author of more than fifty books, including The Sacred Balance, Everything Under the Sun and Letters to My Grandchildren.