Stephen Kinzer: The CIA Search for Mind Control on Alternative Radio – Sunday at 10am 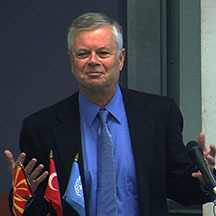 CIA skullduggery is legendary from overthrowing governments to germ warfare to assassinations, but its MK-Ultra program may be at the top of the list. MK-Ultra was the code name for the top-secret CIA project in which the Agency conducted hundreds of clandestine experiments, often on unwitting people, to assess the potential use of LSD and other drugs for mind control and psychological torture. MK-ULTRA was essentially a continuation of experiments that began in Japanese and German concentration camps. Not only was it roughly based on those experiments, but the CIA actually hired the war criminals to share their “research” as to what techniques were effective and what were not. It’s a dark page in U.S. history. The godfather of the whole operation was the largely unknown Sydney Gottlieb. He was sometimes called the CIA’s “poisoner in chief.”

Stephen Kinzer was a New York Times correspondent and bureau chief in Nicaragua, Germany and Turkey. He teaches at Brown University. He is author of many books including Poisoner in Chief: Sydney Gottlieb & the CIA Search for Mind Control.