Malcolm X: The Ballot or the Bullet on Alternative Radio – Sunday at 10 am 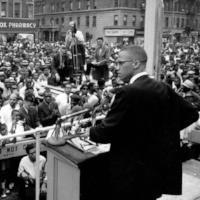 He was born in an impoverished family in Omaha, NE on May 19, 1925. He recalled being “dizzy” with hunger. He said, “My whole life has been a chronology of changes.” Indeed it was. He went through a remarkable series of transformations from being a street hustler known as Detroit Red to going to jail, to converting to Islam then breaking with Nation of Islam leader Elijah Muhammad and becoming an independent voice for black dignity, self-reliance, and economic independence. Malcolm challenged the racist white power structure and the blacks who went along with it. He was only 39 years old when he was assassinated on February 21, 1965 in New York. Maya Angelou said of him, “His aura was too bright.” He had a charismatic presence and a radiant smile. And he was an electrifying orator. At his funeral, Ossie Davis eulogized him as our “prince. Our own black shining prince.” Today, Malcolm’s autobiography continues to be read and his words continue to inspire.

Malcolm X, born Malcolm Little, also known as El-Hajj Malik El-Shabazz was a prominent human rights activist. To his admirers he was a courageous advocate for the rights of blacks, a man who indicted white America in the harshest terms for its crimes against black Americans; detractors accused him of preaching racism and violence. He has been called one of the greatest and most influential African Americans in history. In February 1965, shortly after repudiating the Nation of Islam, he was assassinated by three of its members. The Autobiography of Malcolm X, published shortly after his death, is considered one of the most influential nonfiction books of the 20th century.