Steven Levitsky: Polarization Can Kill Democracy on Alternative Radio – Sunday at 10am 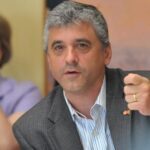 It’s axiomatic that political discourse in the U.S. is becoming more and more extreme. There’s even talk of a coup. In textbook coups, martial law is declared. The internet and phones go dead. The opposition is jailed or killed. This is how we think of authoritarian regimes beginning. Yet Steven Levitsky says, “Democracies may die at the hands not of generals but of elected leaders.” He lays out a four-part test for identifying authoritarian leaders: rejecting democratic institutions, denying the legitimacy of political opponents, tolerating or encouraging violence and curtailing civil liberties. He notes, “With the exception of Richard Nixon, no major-party presidential candidate met even one of these four criteria over the last century. Donald Trump met all of them.” If we are not careful polarization can kill democracy.

Steven Levitsky is Professor of Government at Harvard. His research interests focus on Latin America and include political parties, authoritarianism and democratization, and weak and informal institutions. He is co-author of How Democracies Die.