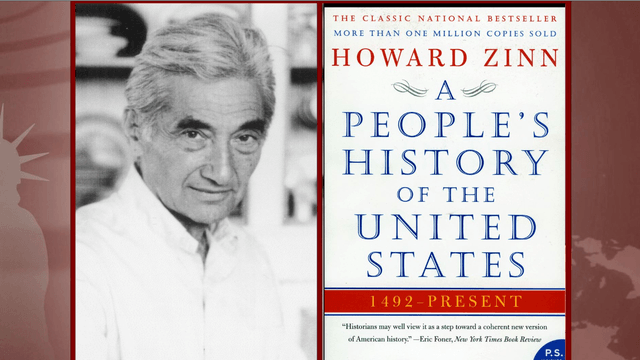 "Read Howard Zinn's People's History of the United States. That book'll knock you on your ass."

It'll do that and more. Howard Zinn's A People's History of the United States has sold more than 2 million copies. And it keeps on selling. Zinn's close friend Noam Chomsky said the book "changed the consciousness of a generation." Zinn's history from below approach was to foreground as he said, "the countless small actions of unknown people." It was a sharp departure from the standard Big Man theory of history: General so and so President so and so, etc.

Howard Zinn was perhaps this country’s premier radical historian. He was an eloquent advocate of non-violent civil disobedience. He was an active figure in the civil rights movement and was among the first to oppose U.S. aggression in Indochina. He spoke and marched against the U.S. invasions of Afghanistan and Iraq. Always ready to lend a hand, he believed in and practiced solidarity. Witty, erudite, generous and loved, Howard Zinn died in 2010. His words continue to inspire many the world over, "We don't have to wait for some grand utopian future. To live now, as human beings should live, in defiance of all that is bad around us, is itself a marvelous victory."