Chris Hedges: Root Causes of a Failed System on Alternative Radio – Sunday at 10 am 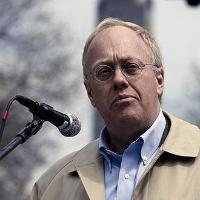 We have dog whistle politics, bullying, and disdain for science and facts. Some coming. For example, Neil Postman is his classic work Amusing Ourselves to Death nailed it when he wrote, “When a population becomes distracted by trivia, when cultural life is redefined as a perpetual round of entertainments, when serious public conversation becomes a form of baby-talk, when, in short, a people become an audience, and their public business a vaudeville act, then a nation finds itself at risk; culture-death is a clear possibility.” He wrote that in 1985. Our political life today is like a reality TV show. There is a fascination with celebrities from Kanye West to the Kardashians to the former host of The Apprentice. And the soundtrack in the background is perpetual war.

Chris Hedges is an award-winning journalist who has reported from the Balkans, the Middle East and Central America. He writes a weekly column for Truthdig.com. He is the author of many books including Wages of Rebellion and America: The Farewell Tour.