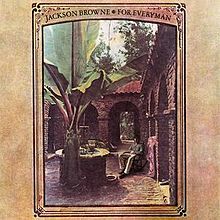 Jackson Browne’s 1973 sophomore release, For Everyman, was notable for its inclusion of “Take It Easy,” a song that Browne started but was ultimately finished by his friend Glenn Frey of the Eagles, and “These Days,” a song Browne wrote as a teenager and which has been covered by a wide range of artists. We’ll hear selections from that album as well as from Paul Westerberg’s Come Feel Me Tremble.