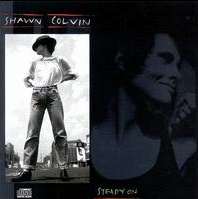 Released in 1989, Steady On was the acclaimed debut album from singer-songwriter Shawn Colvin. Colvin recently re-recorded the album as an all-acoustic affair we’ll hear selections from her reimagining of that release as well from Aaron Lee Tasjan’s Karma For Cheap: Reincarnated, his re-imagining of his 2018 set, Karma For Cheap.

(Photo via Wikipedia – Fair use)