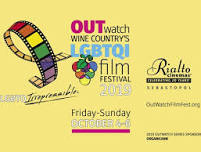 Last week while one NFL player came out as openly bisexual, another was preaching for the anti-LGBTQ group focus on the family by encouraging school children to bring their bibles to school in order to preach to their friends.

In Kentucky, a school principal, who back in 2008 confiscating books with LGBTQ themes from the school library because he thought they could corrupt children, was arrested this week for possession and distribution of child pornography.

Locally, this year’s OutWatch LGBTQ film festival will take place October 4 through 7 at the Rialto Cinemas in Sebastopol.