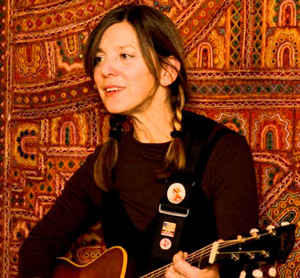 ..are these your four favorite women? Not really. I think I may have met Joanne Rand sometime, but questions like these have become more and more difficult to figure out. Let's say...I've heard a lot of all four, though I'm far from being a completist for even one of them. I do know that

Libby Roderick is a folk singer whom I just found out about, but I forget who told me about her. My wife? Could be. She's reminiscent of the way folk singers used to be when I was just finding out about them. Serious, politically progressive, very devoted to her music. I get a sort of Joan Baez-buzz when I hear her sing, and wonder if Joan has ever made music with her. If I could choose the ideal time period to live in, I might just choose the '60's, and Joan's is one of the '60's faces that enter my inner eyes when I think back a half century.

Stacey Earle is Steve Earle's sister, and the feeling I get from thoughts about her is being in the presence of honesty. She's written several songs about being a young unmarried Mom, and I'm sure that what I hear in these songs is how I would have thought about Stacey had I been around her back in the day. She has a very unique vocal style, and has written a number of excellent songs, some of which you'll hear next Friday night.

Joanne Rand is a local person, and has recorded quite a few CDs for a home-town singer. She definitely fits in a quirky category, and her songs are full of surprises, and also what I think of as historic accuracy. I would expect to see her on KRCB's morning music shows - - hmmm - - I'll have to ask next Thursday, when I come in to record the interviews for Sonoma Spotlight, if Brian or Doug have ever invited her.

Gillian Welch is, really, one of my favorite women singers, and probably the best-known of the four, although I've wished for years that she'd record more. All of her CDs are genuine treasure-chests of original music, and all her work is enhanced by the guitar and background vocals of her partner, David Rawlings, who's now recording his own stuff on occasion. Little did I suspect that she grew up in the Los Angeles music scene, and that she and David at the Berklee Music School (is that how you spell it?) back east.

So, those are the four. This is a show you're going to remember for a long time.