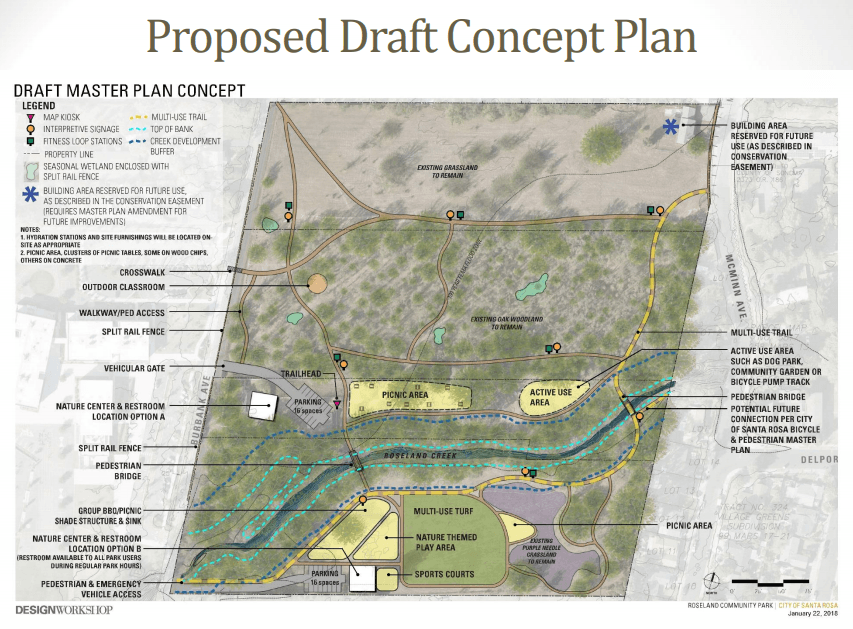 As part of our collaboration with Santa Rosa's KBBF bilingual radio station, we're presenting portions of their "Informe KBBF" news call-in program about health.
This work is supported by a grant from the USC Annenberg Center for Health Journalism Impact Fund.
(Image: Park plan created by the City of Santa Rosa for Roseland Creek Community Park. Different segments of the community, with differing goals, have been engaged in the process. We'll have a longer story about this park as part of our Roseland Health project.)
August 10, 2018 episode of Informe, with an introduction to the idea of the social determinants of health, featuring Dr. Enrique Gonzales:
During this broadcast, producer of Informe KBBF, Edgar Avila, greets the audience for the first time behind the microphone. He introduced the Roseland Health Project, played back and expanded on the interview with Steve Mencher, KRCB news director, and introduced the concept of "social determinants of health" with Dr. Enrique Gonzalez-Mendez, longtime KBBF volunteer.

August 17, 2018 episode of Informe, looked at how housing and insecurity around renting -- and the jump in housing prices -- affects the health of residents of Roseland and other areas of Santa Rosa.

Nora says every person she spoke with was concerned about housing. Interviewees share grievances about the high cost of rent and lack of options .Mariana and Dr. Gonzalez discuss health impacts of poor housing conditions. One caller urges caution when when looking for housing – landlords can take advantage of the tight market and rent properties in poor condition.

August 24, 2018 episode of Informe KBBF tackles gang violence.
Host Mariana Almaraz is joined by Dr. Enrique Gonzalez and Alfredo Sanchez, a longtime community organizer and activist, for this hour on gang violence. Dr. Gonzalez talks about the history of gangs in Sonoma County, the mixed record of the gang task force and what programs have been effective in curbing gang activity.
In a series of street interviews, residents discuss cultural and generational differences in raising children and how overworked parents are not able to spend enough time with their kids. Callers share advice for teens and stories about their own parenting styles. Alfredo discusses the importance of disciplining children without using violence and fostering emotional connection within families.
August 31 episode of Informe, KBBF in two parts. This two-hour show, hosted by Mariana Almaraz, focuses on trauma related to immigration.
The episode begins with recordings of interviews in Roseland, in which residents describe how the fear of deportation has caused people to leave the house less, shop less, even refuse to go to work. Dr. Enrique Gonzalez joins the program to explain how trauma is connected to chronic illness. Social worker Belinda Hernandez Arriaga calls in to describe her work with families in a Texas detention center, and shares advice on how to support traumatized children and families. Dr. Gonzalez closes out the program by listing symptoms of trauma in children, and encourages families to create a plan in case a parent is detained.
Part One:
Part Two:
September 14 episode of Informes on youth nutrition.

Host Mariana Almaraz and Dr. Enrique Gonzalez spend this two-hour program discussing nutrition. The show begins with an interview with Adia White, a KRCB journalist. White reported on food insecurity in Roseland -- 90 percent of children in the district receive free or reduced lunches.

Patricia Moreno, a mother to a 13-year-old girl, joins the conversation. She says the district does offer healthy food, but she sees students throw away vegetables and kick around apples. She says parents need to help children understand that food is sacred. A caller said they wanted to know how big companies influence what schools serve. Dr. Gonzalez said traditional diets hold a lot of wisdom; together, beans and corn are a complete protein. He mentioned the importance of reducing the consumption of meat and sugar.

Host Mariana Almaraz is joined by Steve Mencher, news director at KRCB. Steve says he was urged to cover Roseland Creek Park, which is in development, by many nonprofit leaders and city administrators. There is tension between how some community members want to use the park and what the nearby homeowners want.

Steve reminded listeners that there are upcoming community hearings and to participate to make their voice heard. A caller talks about the expense of paying for youth sports fields, and wonders if the park will include a soccer field.  Steve replies that it likely will not. Three volunteers with the Roseland Community Building Initiative (CBI) join the program to talk about their work to prevent youth delinquency, support all-age activities and beautify Roseland.

They also invite listeners to an upcoming community clean-up in Roseland. Local activist Ana Salgado wonders why volunteers have to keep streets clean when the city should also bear responsibility. Ana reminds listeners that there’s a city app for reporting overflowing trash bins, graffiti and more.