California’s public radio stations are investigating the safety of Pacific Gas & Electric Company’s power lines ahead of wildfire season. We want your help. Email pictures of the lines in your area to This email address is being protected from spambots. You need JavaScript enabled to view it.

Pacific Gas and Electric Company has sparked some of the state’s deadliest wildfires. The company pled guilty to 84 counts of involuntary manslaughter after the 2018 Camp Fire. It faces felony charges in connection with the 2019 Kincade Fire in Sonoma County and is being investigated for murder in Shasta County, after the Zogg Fire.

The record that led a federal judge earlier this year to declare that "PG&E has been a terror — T-E-R-R-O-R — to the people of California.”

Epic fires in recent years have highlighted the urgency of preparation, and spotlighted vast vulnerabilities. We wanted to get a better understanding of how dangerous the company’s power lines are heading into wildfire season, which given hot, dry conditions is expected to be among the most dangerous on record.

So we created a map that highlighted the riskiest power lines in PG&E’s grid, taken from a recent audit by the California Public Utilities Commission Wildfire Safety Division, and layered that on top of a heat map provided by a CPUC heat map that shows areas at “extreme” and “elevated” wildfire danger this year. We’ve also mapped the electric circuits where PG&E believes there is the greatest risk of a tree catching fire by catching sparks from a power line or hitting a utility pole.

Now, we want your help assessing wildfire risk. If you are concerned about the safety of power lines in your area, please email pictures of the lines, together with your contact information and the street address or cross-street of the image, to This email address is being protected from spambots. You need JavaScript enabled to view it.. We promise not to publish or reveal any personal information without securing your approval first. We will assess your photographs for compliance with state law and may share them, along with the geographic information you provide with PG&E, CALFire, and the CPUC.

Here’s what PG&E is required to do, and what you should look for:

In its audit, the California Public Utilities Commission said PG&E, "appears to not be sufficiently prioritizing or reducing the risk of wildfire ignition.”

As of January, the commission said, PG&E had failed to do any vegetation mitigation work on many of its highest risk circuits, including some areas of the Wine Country, Sierra Foothills, and Santa Cruz Mountains.

In an emailed statement, PG&E spokesperson Lynsey Paulo responded to the audit saying “we have more to do, and we are committed to doing it the right way.” On May 6, the company issued a 196-page “corrective action plan”  acknowledging its vegetation management plan “had gaps and shortcomings.”

In its response, the company said it had “undertaken efforts and initiatives” to improve the safety of its grid. 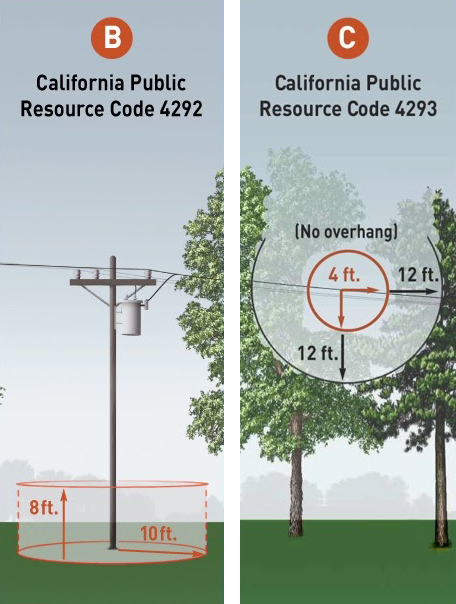 All foliage must be cleared within four feet of power lines of between 2,400 and 72,000 volts (most regular electric lines). The rule expands to 10 feet on higher-voltage lines and requires the removal of “dead, diseased, defective and dying trees” that could fall onto the lines.

PG&E is required to maintain a firebreak of at least 10 feet from utility poles, with tree limbs of within the 10-foot radius of the pole removed up to eight feet above the ground. In other words, even if a tree trunk is more than 10 feet away, its branches should not reach close to the pole until they are more than eight feet off the ground. This is to prevent the pole itself from catching fire.

There are exceptions to both of these rules, and they do not apply in every part of the state. The areas where they do apply are called the State Responsibility Area; it includes most parts of California that are at heightened risk of wildfire and not owned by the federal government.

Inspecting the Lines, Getting Results

Before asking you to photograph the lines, we tried it out ourselves. In late April, we sent a reporter, Marc Albert of Northern California Public Media, out to drive a high-risk section of the grid in Western Sonoma County, an area of “extreme” wildfire risk, according to CalFIRE. He went armed with a camera and copies of government regulations describing how those lines are to be kept safe.

Albert found a number of power lines that appeared to violate these regulations. On Harrison Grade and Green Valley Roads northwest of Sebastopol, he found oaks and redwoods with branches that appeared to be precariously close to electric current.

The oak trees were also very close to the utility poles, despite a state law that requires a clear, 10-foot radius around poles in most rural areas that are not on federal land. The same rule also requires that all tree branches in the zone be removed up to eight feet above the ground, which was not the case.

On nearby Joy Road, the reporter found more concerning evidence of risk: a live oak tree so close to utility poles that they practically wrapped around them. The photographs he took concerned independent fire experts we consulted, so we brought them to PG&E.

Paulo, the PG&E spokesperson, shared them with her company’s vegetation management unit and responded that they were in compliance with all relevant state laws. Nevertheless, crews were dispatched to trim a tree whose branches appeared to be dangerously close to the lines.

In the case of the first tree, with branches that appeared too close to the lines, the company had them trimmed back.

Paulo said a “laser range finder” determined that the branches were farther than four feet from the lines, but nevertheless ordered a work crew to trim them.

The company gave us a different response to the lack of space between the trees and the poles, and the fact that in multiple cases branches were making contact with the pole at heights close to the ground. In both cases, Paulo said the poles we photographed were not covered by state law by a CalFIRE rule exempting equipment that “is completely sealed and liquid-filled.”

We contacted both CalFIRE and the California Public Utilities Commission seeking clarity on this point.

“The equipment I saw and photographed appeared to be a standard 12KV line. I did not see anything that would indicate to me that the equipment was either ‘completely sealed’ or ‘liquid-filled,” reporter Marc Albert wrote to the CPUC.

“We will look into this,” the CPUC spokesperson, Terrie Prosper responded.

Email any photos you take, together with your location to This email address is being protected from spambots. You need JavaScript enabled to view it.. Note: If you smell natural gas, see downed power lines or suspect another emergency situation, leave the area immediately and call 911. Then, call PG&E at 1-800-743-5000.