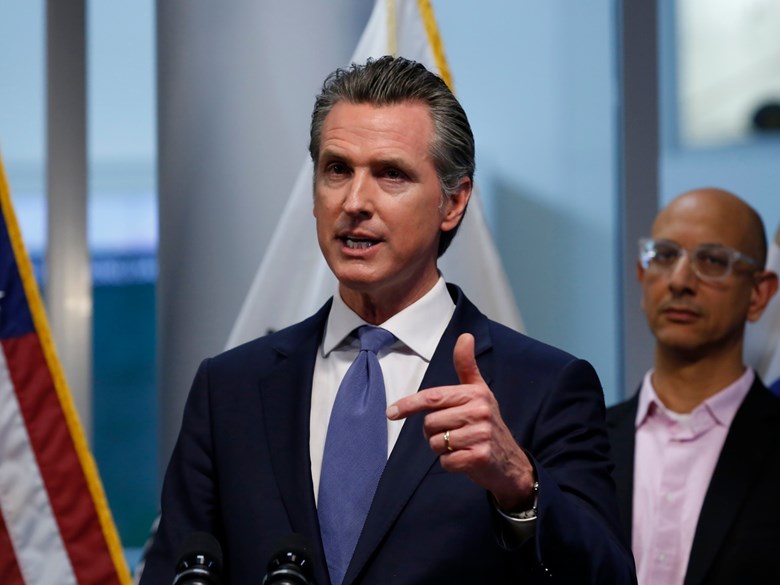 The announcement came as President Trump signed a federal stimulus package that will pump billions of dollars into the state’s flailing economy and offer a lifeline for an unprecedented public health response to the pandemic.

California reported 78 deaths, up 26% from Thursday, with 3,801 positive cases of the coronavirus. While nearly 90,000 tests have been performed, Newsom said, tens of thousands of results have yet to come back.

Still, if those trends hold, Garcetti said, Los Angeles County will soon have an overwhelming caseload, similar to New York City’s on a per-capita basis.

“Whether it’s one week or two weeks, as I’ve been sharing, we will be where they are,” Garcetti said. “We’ll have doctors making excruciating decisions. We’ll be trying to figure out what we do with that surge, how to get ventilators, where to find beds.”

Newsom added: “Every minute is a minute lost.”

California, which was the first state to issue a shelter-in-place order, continues to ramp up medical facilities in anticipation of a surge in coronavirus patients in the coming weeks. Newsom initially said the state would need an extra 20,000 hospital beds, but he increased the estimate to 50,000 in recent days in response to the growing epidemic. On Friday, the governor joined Garcetti in visiting the U.S. Navy’s Mercy hospital ship, which was brought to San Pedro to relieve Los Angeles area hospitals of non-coronavirus patients.

The federal government’s $2.2 trillion package includes checks of as much as $1,200 to individuals earning up to $75,000, with smaller checks for those making up to $99,000. It also extends nearly $900 billion in loans and other financial assistance to businesses, both small and big, sends $150 billion in aid to hospitals, clinics and labs and dramatically expands unemployment insurance payments for recently unemployed Americans, including gig-workers and freelancers.

California can expect to receive a significant portion of that aid. Of $150 billion that will be sent directly to state, local and tribal governments, California is due to receive $15.3 billion to plug budget shortfalls, according to the Center on Budget and Policy Priorities. The state can expect billions more for Medi-Cal, its Medicaid health care program for the poor, plus an infusion into the state’s unemployment insurance fund.

The bill also includes new emergency funding for existing programs in the state. That includes hundreds of millions of dollars for housing, homelessness and childcare and tens of millions for law enforcement and election assistance.

That’s likely to help paper over at least part of the gaping hole the pandemic is certain to blow in the state budget. But Newsom has already said he’ll need more.

“State and local governments will need additional and flexible funding to ensure they can continue responding to this crisis and continue critical services,” the governor said in a press release after the bill passed the House.

Also on Friday, Los Angeles County also ramped up efforts to keep people indoors by ordering beaches and hiking trails to close through April 19. County supervisors said the volume of people who opted to stroll on the sand or walk the trails was unacceptable, given the need to practice social distancing in a nationwide effort to slow the spread of the coronavirus.

And Newsom issued what he described as a new statewide moratorium on evictions for renters affected by the pandemic.

With unemployment claims topping 1 million in less than two weeks and the state bracing for a downturn worse than the Great Recession, Newsom released an executive order that gives tenants 60 days to respond to an eviction lawsuit if they can document that their missed rent was due to the coronavirus crisis. The governor said his order is intended to provide basic protection for renters and allows more stringent local protections to stand.

Renter groups and some Democratic lawmakers were disappointed by the limited action in the middle of a statewide mandate that residents remain at home. They said Newsom’s directive fails to protect renters evicted for other reasons, still allowing landlords to pursue evictions next month and those renters to be locked out as soon as the emergency is lifted.

“It does very little to protect tenants against evictions, and I think essentially just kicks the can down the road for some folks,” said Sasha Harnden, a lawyer with the Western Center on Law and Poverty.

Get the latest on coronavirus in California with our frequently asked questions, dashboard tracking the numbers and our latest updates.