Coronavirus Detectives: Here’s How Counties Try to Track Everyone Exposed 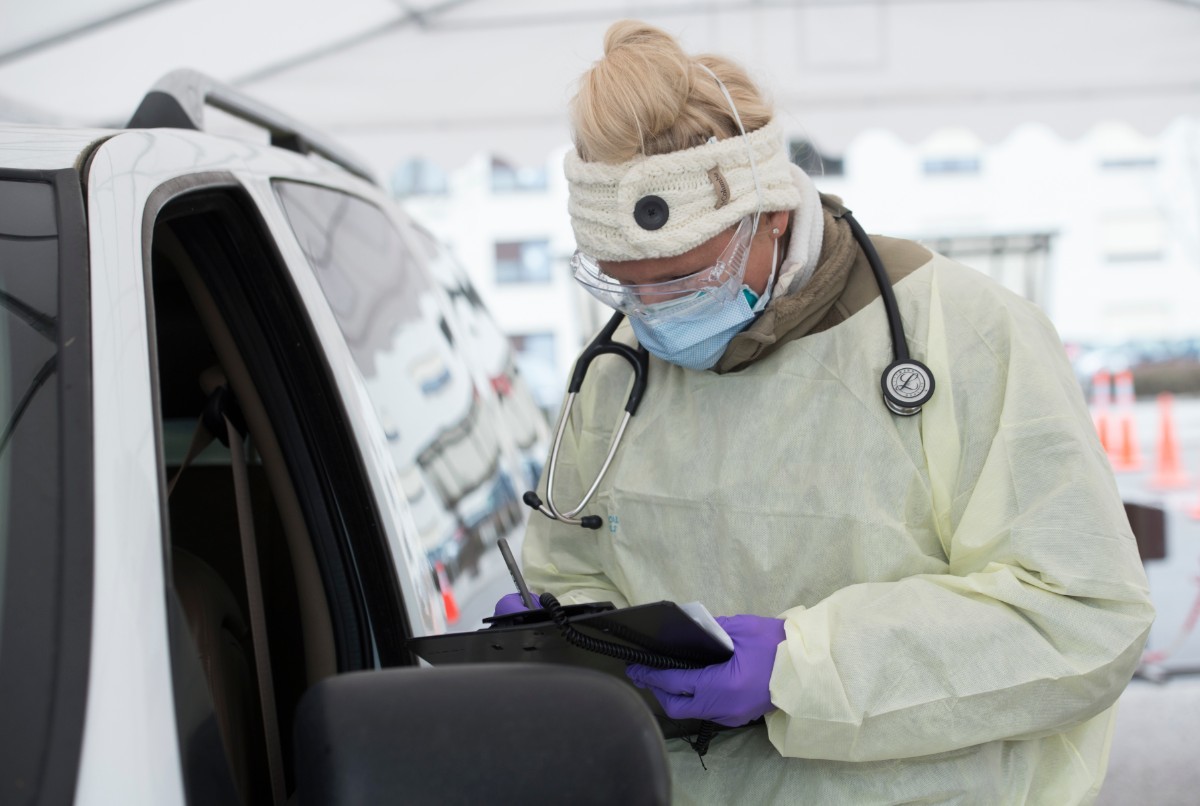 By the time public health officer Bela Matyas learned that the novel coronavirus was spreading in Solano County, the patient in her 40s was already on a ventilator.

Back in February, the woman was the first in the nation known to be infected without traveling or being around someone who was sick. But she was too ill to answer questions about where she’d been and whom she had talked to, worked with and touched.

Dozens of public health investigators from local, state and federal agencies fanned out like detectives, questioning the family members who had visited her and the hospitals that had orchestrated her care — even staking out the store where she worked. Their mission: to piece together a list of people who could have been exposed to the virus.

This process, called contact tracing, is a critical element in containing the spread of the novel coronavirus. But the ability of California’s 61 county and city public health departments varies greatly as they struggle to keep pace with rising numbers of patients.

“What we had to do was clear from the beginning,” Matyas said. “But actually being able to do it was very hard.”

Some local health departments, like Madera County’s, have managed to trace the contacts of every person who tests positive for the coronavirus. Others, like the city of Long Beach and Placer County, are so overburdened that they are only trying to trace contacts that could put vulnerable people at risk, such as healthcare workers or people in nursing homes.

To handle the pandemic, the nation will need 30 contact tracers for every 100,000 Americans, according to the National Association of County and City Health Officials. But no California city or county has anywhere near that many. Under that formula, for example, Long Beach would need 140 investigators, seven to nine times more than it has now.

North of Sacramento, Placer County, with a population of almost 400,000, would need 120 tracers.

“It certainly illustrates the point that 18 — which is our expanded capacity, which is more than our baseline of six — is woefully inadequate,” said Aimee Sisson, Placer County’s public health director.

Contact tracing will become even more important as the state starts reopening parts of its economy. The concern is that more human interaction could cause flare-ups, especially since people can spread the virus before feeling ill and limited testing leaves people unaware they’re infectious.

“We need to make sure that there is capacity in every county to do adequate contact tracing. That’s part of containing the disease,” said Kat DeBurgh, executive director of the Health Officers Association of California. “Are we ready today? No. When will we be ready? I don’t know.”

Gov. Gavin Newsom addressed the concern about inadequate contact tracing on Wednesday, announcing plans to train 10,000 people to help local health departments. “The good news is we believe we have the capacity to build an army of tracers,” Newsom said, although he did not say when they’d be ready to deploy.

Jeffrey Martin, a professor of epidemiology and biostatistics at the University of California, San Francisco, said that fighting an epidemic is like fighting a wildfire: The state can’t afford to mess up containment.

“[It’s] important to track all of those people down to extinguish all the embers in that brushfire,” Martin said. “If we don’t do it right, and if the brush fires are not extinguished, you’d have to be a magical, wishful thinker, to think that there would not be a raging wildfire.”

Some counties keep up, others can’t

The San Joaquin Valley county of Madera typically has two to three people keeping tabs on tuberculosis and sexually transmitted infections in its population of roughly 157,000 people.

Still, by teaming with the sheriff’s department and probation investigators, the county has managed to keep up contact tracing, isolation and quarantine for everyone potentially exposed.

Madera is unusual in that investigators, typically in plain clothes, visit patients and their contacts in person — sort of. They drop off packets of information as well as a letter excusing work absences to employers. Then they get back into their cars, and answer questions face-to-face through the window, over the phone.

“Then they can explain to them what’s going on,” Bosse said. “We understand that people are experiencing a lot of anxiety and it’s difficult for people to hear this news that they might have been exposed.”

For now, the spread of the virus seems to be slowing. “We’re really hopeful that it’s at least in part due to the active contact tracing that we’ve implemented,” Bosse said.

In Riverside County, cases are coming in faster than the county’s 30-plus person team can investigate them, according to Barbara Cole, branch chief of disease control for the county’s public health department. The county has 3,084 confirmed cases.

“It’s about trying to establish a rapport, stressing how we’re going to protect their confidentiality,” she said. “The majority of people, they’re concerned about their friends and their family.”

In the Northern California county of Solano, Matyas quickly realized that tracing and quarantining all contacts would be impossible for every case. To date, 186 people have tested positive in the county.

Instead, the county focuses on tracking the risk to vulnerable populations, including people who are older, have underlying medical conditions, or live without shelter.

Solano County’s communicable disease team, which has shrunk to its original staff of six, first interviews anyone who tests positive about where they work and who they came in contact with. That in some cases is a long list: people who visit their homes, coworkers who sit close or share food.

Then a member of the team calls all of the contacts. The idea is to identify and isolate people who are feeling ill or whose jobs put them at risk of infecting others in nursing homes, hospitals, or homeless shelters.

“We no longer pretend that we can do any kind of active quarantine,” Matyas said. “There’s no bandwidth to check on them to see if they’re doing it.”

Long Beach and Sacramento and Placer counties also are only tracing the virus’s spread through vulnerable populations.

“Instead of asking every place you went to, every person you came into contact with, we say, ‘Have you been in contact with vulnerable populations?’” said Sisson in Placer County. “We just have too many cases for that full interview.” In the county, which is home to the first person to die of the novel coronavirus in California, 133 people have tested positive.

In Long Beach, every case initially was tracked. But then people kept getting sick, and most of the deaths are in long-term care facilities

As people sheltered in place, contact tracing didn’t have to be as extensive. “Now we’re to the point where we have more than 400 cases, and we’re really focusing on our healthcare worker cases, and our cases in our long-term care facilities,” said Emily Holman, communicable disease controller for the city’s health department.

Tracing contacts of people in long-term care facilities is different than in the community at large. Instead of focusing on reconstructing a web of contacts, the aim is to rapidly identify and separate infected and potentially exposed people from healthy people. Speed is key, so if someone’s symptomatic, they’re treated as a case even with no test results.

“Every minute in those facilities can be crucial and could prevent an exposure,” Holman said.

Former CDC Director Tom Frieden called for an army of more than 300,000 contact tracers in an interview with STAT. And current CDC head Robert Redfield announced plans to hire 650 more public health personnel, including to help with contact tracing, the Washington Post reported.

Local health departments have been bolstering their workforces on their own. San Francisco plans to recruit and train as many as 150 people to conduct contact tracing, including librarians, city attorney staff and medical students.

The Bay Area’s Alameda County also has ramped up from just seven staff investigating cases of communicable disease to 60 people assigned to the novel coronavirus — including 18 who follow up with contacts. As the epidemic progresses, “we anticipate deploying as many as 300 staff for contact tracing,” said Nicholas Moss, acting director of Alameda County’s Public Health Department.

Sacramento County is working to expand its six-person team to 30 by recruiting from other departments and training medical students to work with people who are homeless.

“We’re hoping that based on the modeling that’s occurring, that we will be ready — and actually, we’re hoping that there won’t be another wave,” said Public Health Officer Olivia Kasirye.

Is there an app for that?

Some counties are looking to technological help. San Francisco, for instance, is training its contact tracers to use a platform that Grant Colfax, director of public health, called “an integral part of our efforts going forward.”

The platform, developed by a software company called Dimagi, is not an app that people can download to their phones. Instead, it’s a web portal that public health workers can use to keep tabs on people with infections, list their contacts and keep in touch.

But Alameda County’s Moss is cautious about protecting the privacy of residents.

“We want to make sure that any technological tool we employ where people’s health information is going to be input, that there are adequate safeguards for privacy,” Moss said. Plus, the app has to be easy to use, and it has to cough back up the data needed to keep tabs on the virus’s spread.

Eric Sergienko, Mariposa County’s health officer, worries that if each local health department ends up using different software, it might be hard to trace contacts that cross county lines.

That’s where Sergienko hopes the state steps in and standardizes the platform California’s counties use. “What can the state do for us? Just by finding the best one,” he said.

State Health and Human Services Secretary Mark Ghaly said that California will need 10,000 more contact tracers as it modifies its stay at home order. Between 2,000 and 3,000 people could test positive per day. And each of them could have ten contacts, he said.

California might not have needed to push quite so hard to ramp up during the crisis if it had funded enough public health workers to begin with. “We’ve been seeking increased funding for years,” said Kat DeBurgh, executive director of the Health Officers Association of California.

More trained health workers could be important in fending off the next pandemic.

“By having these trained contact tracing public health workers, we can actually prevent infections, prevent the severe disease from happening in the first place,” said Lee Riley, a professor of epidemiology and infectious diseases at the University of California, Berkeley’s School of Public Health.

“But right now, everything that we’ve been doing is just reactive to what’s already happened.”