Acts of Grace from Everyday Californians Are Getting Us Through 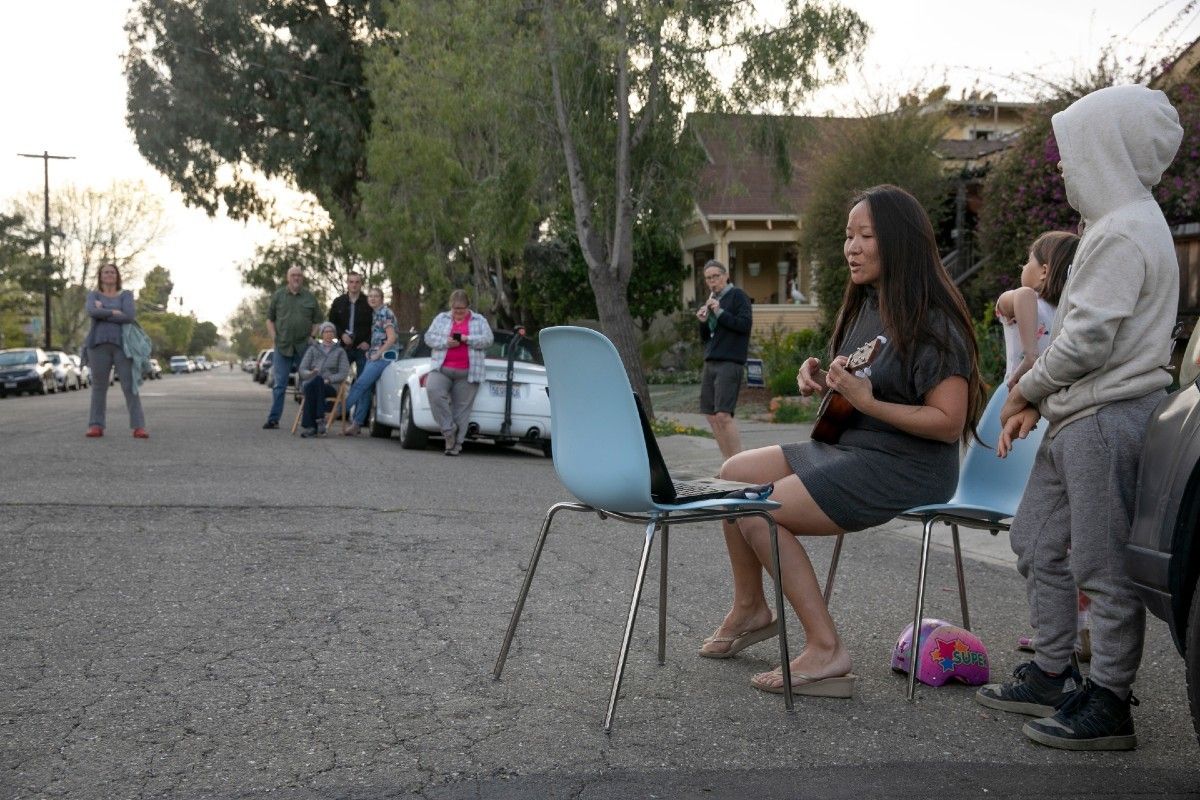 From inside our homes, this might seem the loneliest moment in modern history.

Slowing coronavirus has meant many of us are physically cut off from friends and family, schools and workplaces, senior centers, book clubs and Little League teams.

Yet woven throughout the horror of the present, evidence of grace abounds. Some manifests in grand gestures, some in small details.

Becca Rosen, a Los Angeles-based fashion designer, said her neighbor — who, as luck would have it, owns a small toilet paper company — has been gifting rolls on neighborhood porches. Talia Golin, a 5-year-old Berkeley street artist of sorts, has been drawing chalk rainbows on the sidewalks near the homes of immunocompromised neighbors.

(Image: Patti Wang-Cross plays the ukulele as neighbors sing ‘You Are My Sunshine,’ ‘Happy Birthday,’ and songs by Bruno Mars during their weekly sing-along. Photo by Anne Wernikoff for CalMatters)

And then, consider the case of the swans and the canned corn.

Gayle Hagerty, the volunteer caretaker of swans that live on the grounds of the San Francisco Palace of Fine Arts, recently had to spend two weeks in quarantine. For 25 years, Hagerty has cared for the swans — clipping their wings, ordering their food, overseeing their medicine. She currently has two in her charge — 23-year-old Blanche (who Hagerty has known since she was an egg) and Blanche’s somewhat grumpy betrothed, 12-year-old Blue Boy (who also goes by Swanathen). Hagerty could order enough feed for the swans from home. But the canned corn they loved was being rationed.

With Blanche sitting on her nest full time (Swanathen is reluctant to be a stay-at-home dad), the corn was especially important, because Blanche could eat it quickly and hurry back to the nest. So Hagerty posted to Nextdoor. Her community responded in force. Swan lovers came from various corners of the city, ultimately dropping off more than 200 cans of corn at the Palace’s locked gates.

“It’s been phenomenal, really, the generosity of the neighbors,” Hagerty said.

Christine Carter, a senior fellow at the Greater Good Science Center at the University of California, Berkeley, and author of several books about happiness, said efforts to connect and support each other are a very human response to crisis.

“Is this exceptional? I don’t actually think it is,” she said.  “I think humans are hardwired to help each other.”

In stressful situations, she said, people can have two different instincts. Some go into a fear-based response, worrying primarily about their own survival. They hoard toilet paper and Tylenol. Others are more focused on species survival and, thus, the needs of others. While fear-based responses tend to create more stress and raise people’s blood pressure, community-mindedness has the opposite effect: lowering blood pressure and fostering positive emotions, “even a sense of awe.”

“Ironically, it helps us more as individuals,” she said.

Even the smallest details matter, Carter said, noting that she recently burst into tears watching a video of people standing on their balconies, cheering for health workers.

“The beauty in such a small act, it’s more than a silver lining, it’s everything,” she said.

In her own neighborhood in San Rafael, people have begun stepping outside their homes every night at 8 p.m. to howl to one another, like wolves in the forest.

“It’s just connecting into the larger neighborhood in a way that, frankly, we never have before,” she said. Her dog, she said, has found this development confusing. 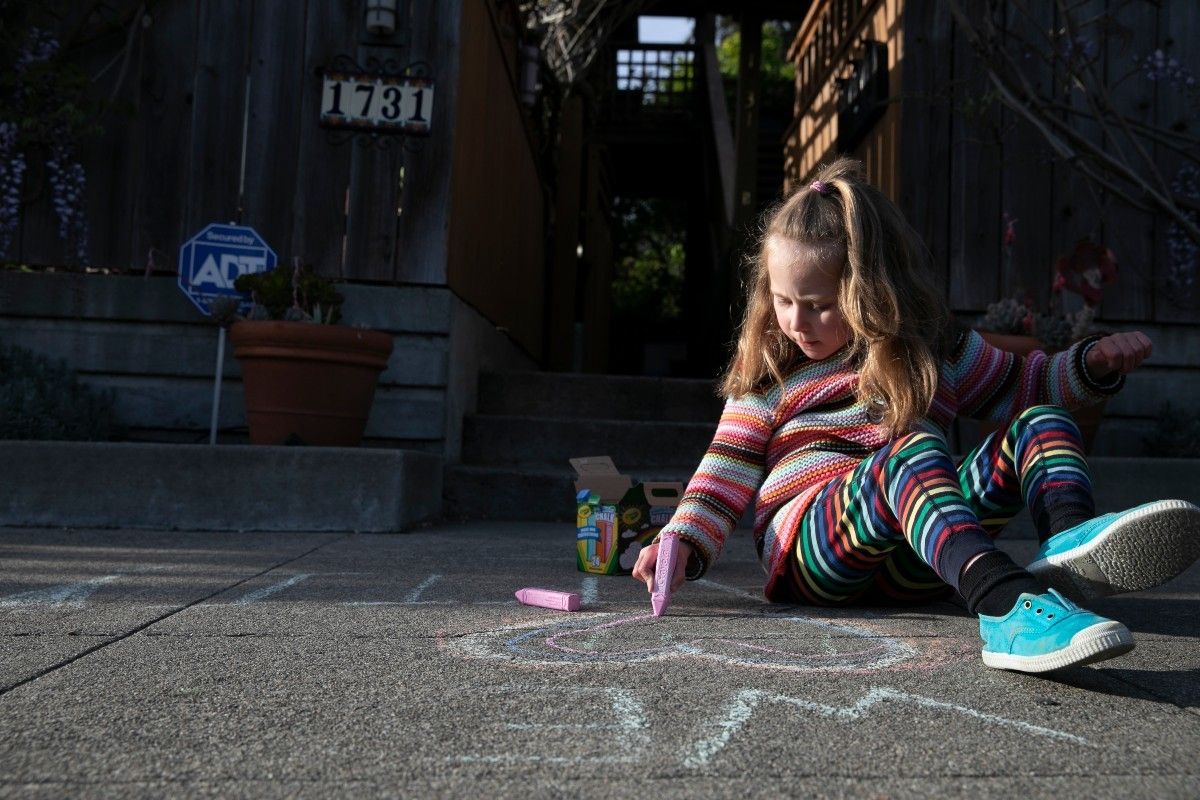 The weekend before the Bay Area began sheltering in place, Krista Luchessi, who runs an organization that delivers free groceries to low-income seniors, spotted an article about a woman from Louisville who was matching neighbors who needed help with those who could provide it. She forwarded the article to her friend Paige Wheeler Fleury, a marketing strategist.

“Can we do this?” Luchessi wondered. The next day, Wheeler Fleury posted news of their effort, called Oakland At Risk, on Nextdoor and Twitter. A month later, she’s had 1,400 volunteers sign up, and has matched 220 of them with seniors and immunocompromised individuals in need of help with groceries or medications — or just someone to talk with.

To prevent abuse, Wheeler Fleury said she matches people of the same gender who live in the same neighborhood, and does her best to vet volunteers online and over the phone — especially when she’s pairing them up with someone who seems especially vulnerable.

(Image: Talia Golin, 5, creates rainbow sidewalk chalk messages for her neighbors thanking them for acts of kindness or showing support for those who are self-isolating. Photo by Anne Wernikoff for CalMatters)

“Every person that stepped up to do this lives within five miles of me and that gives me so much hope about what we can be as a community,” Wheeler Fleury said.

Since word of their effort has spread, people around California have reached out for tips about how to replicate it: “It’s kindness spreading,” she said.

Shawna Reeves, director of elder abuse prevention at the Institute on Aging, said while such programs are “vital and important” and most participants are “good, honest people,” the current combination of isolation, dependence and fear can put some vulnerable seniors in precarious situations. She recommends that volunteer organizations limit financial transactions between volunteers and the people they serve, and says ideally the same volunteer shouldn’t do both wellness checks and grocery shopping. She also recommended that elderly people tell trusted individuals about the arrangement and that the volunteer organizations try to raise awareness about scams targeting seniors.

Such grassroots efforts can have real impact on emotional well-being, said Merritt Schreiber, a professor of clinical pediatrics at the Lundquist Institute at Harbor-UCLA Medical Center and UCLA’S David Geffen School of Medicine.  “Social support has been shown to be one of the strongest predictors of coping with disasters and adverse experiences,” he said.

While much discussion surrounding coronavirus has focused on flattening the infection curve, Schreiber believes there’s a psychological curve too. Enhancing social support, he believes, is one way to protect more people from mental health problems.

Billie Greer, 82, lives in downtown Los Angeles, in a building she shares with “a lot of millennials and their dogs.” Greer, who ran a government affairs firm for decades before retiring recently, guesses she’s probably the oldest resident. She’s been surprised and heartened by how many of her younger neighbors have reached out to ask if they can buy groceries for her.

“I jokingly say to friends, ‘With all this, I should open a food bank out of my front door,’” she said.

That’s why Carol Wu and her friend, Li Yan, decided to raise money to buy masks for health workers in their community. They started tracking the outbreak earlier than many of their Palo Alto neighbors, since they have family members and friends in Hong Kong and China. Wu said she read stories in the international press about people lining up for six hours to wait for masks. Then, in late February, the first cases of the virus began appearing in Santa Clara County, which still has one of the state’s largest outbreaks.

Anxiety kept Wu up at night, worrying about the doctors, nurses, firefighters and those living and working in senior homes in her community.  On one of these sleepless nights, she sent a text to other parents at her kids’ school.

“Let’s do something,” she told them. “Each of us is just a drop of water in a bucket, but together we can let the river flow. Even if we can save one clinic for one week, we’re doing something to help rather than just sitting on the sidelines.”

Yan offered to collect the money. Donations poured in — especially from the local Chinese-American community. Overnight, they raised $3,000, enough to buy 2,000 surgical masks from a local dentist’s office. Within a few days, they’d raised $26,000 from a few hundred people. They bought all 15,000 of the dentist’s remaining masks. They quickly distributed all of them. When they couldn’t find any more masks to buy, they refunded the excess money.

This support from the public is not lost on Dr. Peter Yellowlees, a professor of psychiatry and Chief Wellness Officer at UC Davis Health. People have written the medical staff thank-you notes in chalk at the entries to the hospital, he said.

“When you walk in in the morning and you read a note before you even get into the door that says ‘thank you for what you’re doing,’ that means a great deal to a lot of people,” he said. 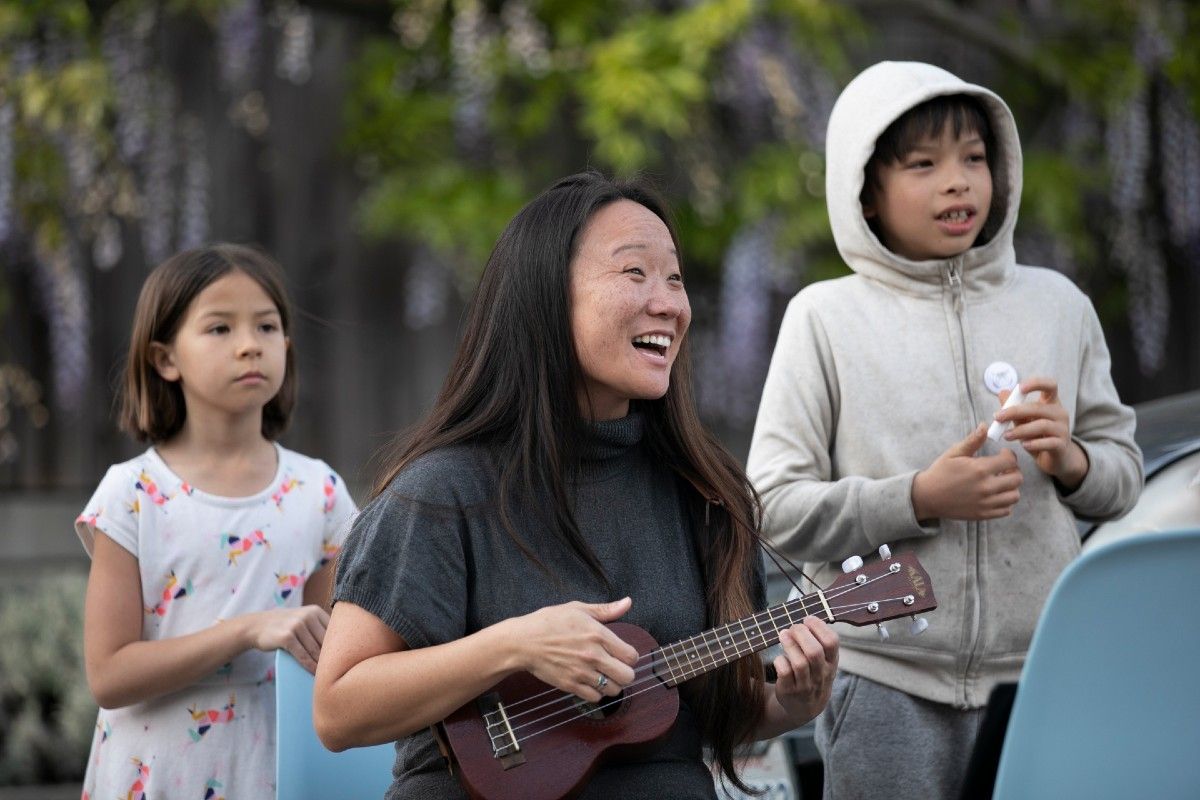 Yellowlees objects to the term “social distancing,” saying what we’re actually doing right now is physical distancing, but social connecting. He thinks this experience — and our efforts to support each other and grieve together — will ultimately leave us more connected as a society

This has begun to happen in one corner of Berkeley where, every Wednesday evening, a block of Francisco Street hosts a neighborhood sing-along.

A few neighbors came up with the idea last month, and posted it on their block’s emergency email list.

Patti Wang Cross is among those who embraced the idea. On a recent Wednesday, Wang Cross, who says she plays ukulele “not terribly well, but enthusiastically,” dragged a small blue stool into the middle of the street, and laid some sheet music down on the asphalt. Her 7 and 10-year-olds knelt next to her. Soon, other neighbors trickled outside — each household standing at least six feet from the next. Someone blocked off both ends of the block. Someone else produced a box drum.

(Image: Patti Wang-Cross plays the ukulele with her children Keli, left, and Oskar, right, during their neighborhood Wednesday night sing-along. Wang-Cross said the weekly event was inspired by videos of neighbors singing from their balconies in Italy and Spain. Photo by Anne Wernikoff for CalMatters)

For a moment, the block was quiet, the way everything seems quieter these days. This silence makes you notice the birds chirping, the breeze rustling through the leaves, the occasional Fed-Ex truck rumbling past. It also makes you miss people.

And then, from the hush, Wang Cross began strumming her ukulele. She, and some two dozen neighbors scattered along the block, muddled their way through the words to “Let It Go,” from Frozen. They moved on, with more confidence, to The Beatles. Two women threw on rainbow boas and led a spirited rendition of YMCA. Everyone did the hand movements. Obviously.

“Overall, I feel like this crisis has brought out the best in people,” Wang Cross said. “It’s been a really beautiful thing.”