His new album, which uses this method, is called Universal Beings E&F Sides. David Marques/Courtesy of the artist hide caption 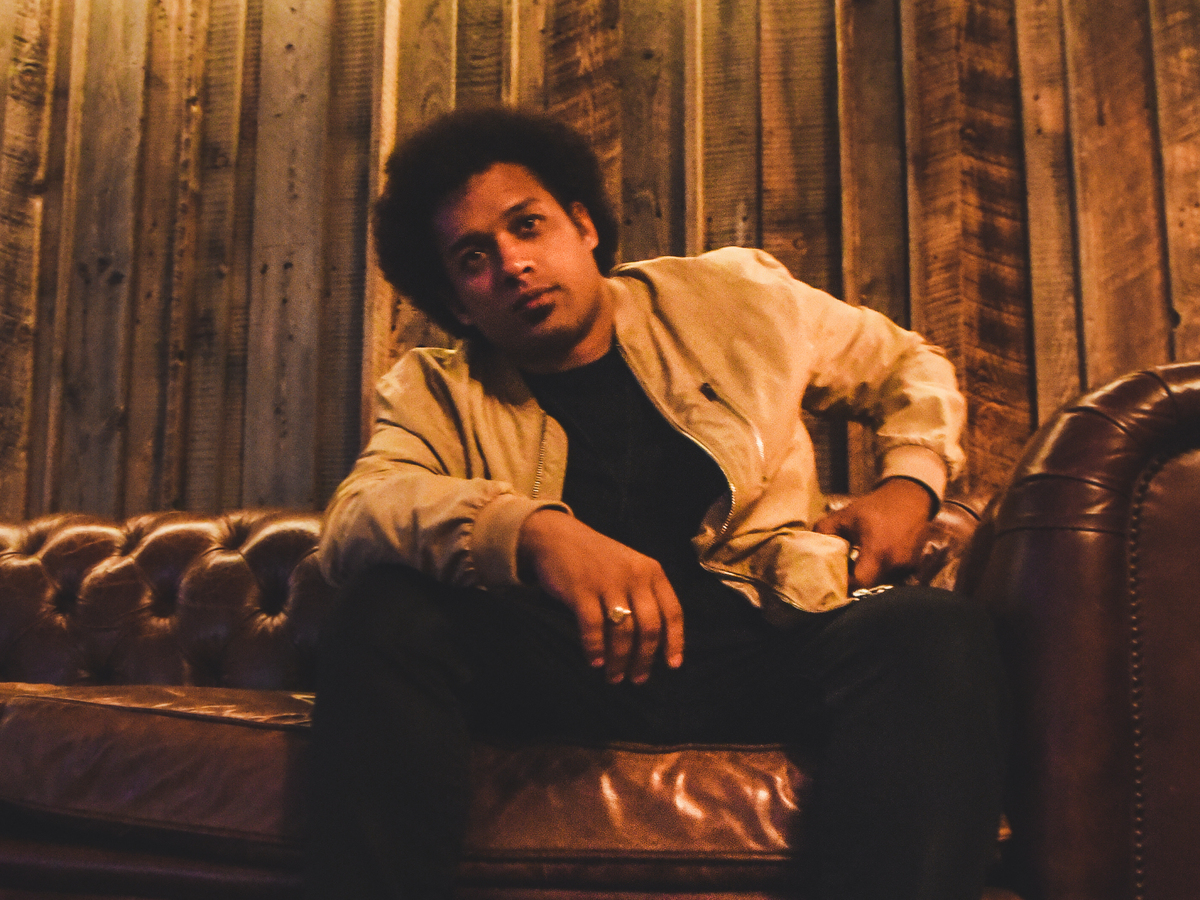 Makaya McCraven has a unique style where he makes improvised live recordings, then builds on them in the studio. His new album, which uses this method, is called Universal Beings E&F Sides.

David Marques/Courtesy of the artist

Makaya McCraven calls himself a beat scientist, so it's no surprise when you ask about his childhood, you hear he was pretty much surrounded by rhythm.

"Rehearsals at our house, banging on drums since I was able to hold a drumstick, sleeping in my dad's bass drum," he recalls. "There was no front head, and a little pillow in there. And you could just kinda go in and lay down if you're small enough."

Birds were singing on his mom's porch in the woods of Western Massachusetts when he connected for the interview. McCraven grew up there and also all over, living an international life. He was born in Paris to two artists: his dad, an American drummer, and his mom, a Hungarian singer. Giants of jazz were household names.

"Archie Shepp, Marion Brown, being around guys like Yusef Lateef," he remembers. "So those are my memories: being at gigs, being at concerts, backstage at a venue, smoky places, stowed away. My kids get similar [experiences] these days."

Makaya McCraven: The Brain Behind The Mind-Bending Beats

In 2018, Makaya McCraven released Universal Beings, a widely acclaimed double album. Now, a new documentary of the same name shows how he made it and he's gone back through the old material from that record to put out another album: Universal Beings E&F Sides.

NPR's David Greene spoke with Makaya McCraven about how he created a new album out of old recordings, the relationship between live and recorded music and his thoughts on the word "jazz." Listen in the audio player above and read on for a transcript of their conversation.

This interview has been edited for length and clarity.

David Greene: I want to talk about the way you make albums. For instance, on "Half Steppin' " a track from your new album Universal Beings E&F Sides, people may not realize this is a mixture of live recordings and studio work. What's happening here?

Makaya McCraven: I just took lots of bits and pieces from a particular kind of jam, so to speak, and then layered some drums. I changed the pitch of stuff, and then I do some overdubbing as well. So it's kind of like a collage of what happened live in the moment in that space.

It's kind of like a collage of what happened live in the moment in that space.

Those are kind of techniques that I use to create symbiosis between the live experience and then recontextualizing that for the recorded realm, which I consider kind of like an alternate dimension, in a way; that the music can exist differently than it can in our natural physical world. And I think that's kind of a magical space of the recorded platform, is that you can do so many things. Les Paul was creating tape loops; the Beatles were doing all sorts of creative ways of mixing things down and playing stuff backwards. And what can we do now to create sounds that never existed in the natural world — or repeat time?

As a kid, I remember, my dad liked action films and he'd have his buddies over and they'd watch a car chase. The car blows up and it rolls and everybody'd be like, "Whoa!"

"Turn it back," you know? What I am looking for are magical moments, particularly in the live space, because there are these fleeting moments that happen live sometimes; you just want to hold on to [them].

You clearly love the energy of live performances so much. How do you balance making all of those changes, taking us into this alternate space, without losing the energy and what you love so much about what's live?

I don't think the recorded platform can replace the experience of live music.

You're going to lose it, some of it. It's like apples and oranges. I don't think the recorded platform can replace the experience of live music. Some of my favorite moments in live music or in performance can be silence. Say you're in a noisy club and there's people talking and something happens at the bandstand, and everybody starts paying attention. That in itself, just being together and sharing a moment brings a level of intensity. It's palpable. It's real.

And we're not experiencing it right now.

We're not experiencing it right now.

Just listening to you describe this stuff. And it's like we're all missing those moments like the isolation of the last few months is like so the opposite.

It's such a strange time to process anything, particularly anything of the past that reminds us of the world as it used to be not so long ago. I still wake up often and I'm like "Wait, really? This is what's going on in the world?" Just these times are very intense in general. Whatever emotions you may be feeling now, whatever struggles you may be having now are amplified.

You call yourself a student of music first at the beginning of the documentary and you've studied jazz throughout your life. As we said, you grew up around some pillars of jazz. How do you feel about jazz in this moment and where it's headed?

Great, I guess. That can be quite a loaded question. I don't even know how well I feel about the word "jazz," though I still use it.

What makes you uncomfortable with it?

['Jazz'] is totally inadequate in describing the breadth of music that has come out under its umbrella.

It has very racist roots, [for] one. It's totally inadequate in describing the breadth of music that has come out under its umbrella. And many of its founding players of the genre also took issue with the word as something that was not defined by them and was used to commodify their work. Miles Davis didn't like to call it jazz. Duke Ellington didn't like to call it jazz. Mingus didn't want to call it jazz. So I think of "jazz" — in quotes — as an aural tradition that you learn from playing and being around other people. And like aural traditions, they evolve and they move; it's not a stagnant thing for preservation. Like with an aural tradition, there's an actual physical touch. And that's where I feel fortunate to have been around a lot of elders. I always think of that as like trying to get a touch of the music and the history and the past that I can take with me as I create music, now, from my vantage point..

Universal Beings E&F Sides is out July 31 via XL Recordings.

Bo Hamby and Taylor Haney produced and edited this interview.