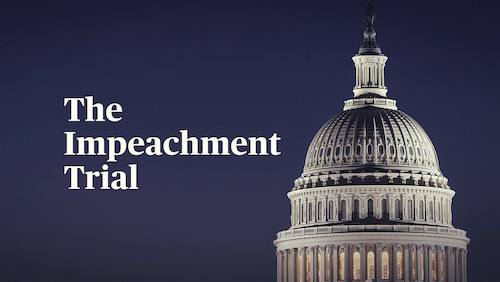 Northern California Public Media will carry live coverage of the US Senate Impeachment Trial. Watch on KRCB TV in the North Bay, or watch and listen online.


On KRCB TV in the North Bay, the coverage will be anchored by managing editor Judy Woodruff and will include contributions from NewsHour correspondents including Capitol Hill correspondent Lisa Desjardins, White House correspondent Yamiche Alcindor, and Foreign Affairs and Defense correspondent Nick Schifrin, among others.

Woodruff will be joined by Michael Allen, Managing Director at Beacon Global Strategies, LLC and Mieke Eoyang, Vice President at Third Way. Allen served as the Majority Staff Director of the House Permanent Select Committee on Intelligence under Republican leadership from 2011-2013. Allen also served in George W. Bush’s White House for seven years in various national security policy and legislative roles, including as Senior Director for Counter-proliferation Strategy at the National Security Council, Special Assistant to the President for Legislative Affairs, and in the Bureau of Legislative Affairs at the Department of State. Eoyang was the Subcommittee Staff Director on the House Permanent Select Committee on Intelligence under Democratic leadership from 2007-2010, and a Professional Staff Member on the House Armed Services Committee, as well as Chief of Staff to Representative Anna Eshoo (D-Ca.) and Defense Policy Advisor to Senator Edward M. Kennedy (D-Mass.)

“Covering impeachment hearings is how the PBS NewsHour got its start, with Robert MacNeil and Jim Lehrer during the Watergate hearings,” said Sara Just, PBS NewsHour Executive Producer and WETA Senior Vice President. “It is as important now as it was then that we provide the audience with access to these historic developments and insight for understanding their significance.”