Ball of Confusion: The 1968 Election 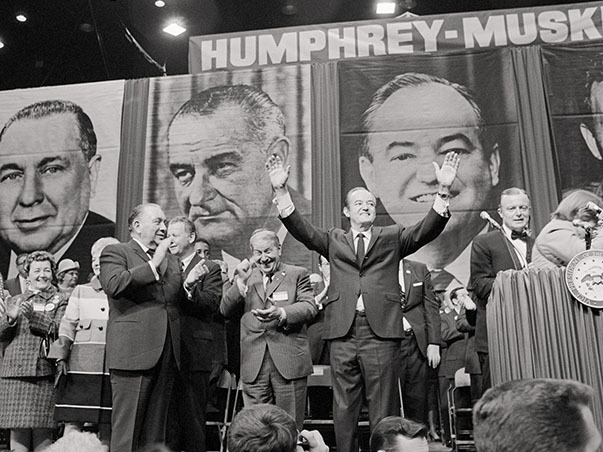 Tuesday, February 18 at 9 pm on KRCB TV in the North Bay. Has there ever been a year like 1968? Assassinations, racial unrest, nationwide riots, and an endless war in Vietnam put the nation on edge and produced a historic three-way presidential election where all the candidates were deeply flawed. Backed into a corner by rising casualties in Vietnam and with no easy exit strategy, President Johnson stunned the nation in March 1968 when he announced he would not seek a second full term in the White House. As his efforts to secure a compromise peace proved futile, LBJ's popularity plummeted further. Even darker hours came when Martin Luther King, Jr. and Robert F. Kennedy were cut down by assassins' bullets. Race riots and anti-war protests erupted in hundreds of cities across the country and the world. The hostilities and bitterness spilled over onto the floor of the Democratic National Convention in Chicago where massive demonstrations and an unforgiving police response nearly tore the party apart. The American voters faced an unwelcome but unavoidable dilemma: could they right America's course, especially with an unsatisfying set of choices in the November election for the White House? Republican Richard Nixon, Democrat Hubert Humphrey, and Independent George Wallace were at the eye of the storm, and in some ways contributed to the intensity of the tempest. The world watched as a fractured electorate narrowly and without evident enthusiasm chose Nixon. In Ball of Confusion, the story of 1968 and the presidential election are told through interviews with Larry J. Sabato, Ted Koppel, Skip Humphrey, Walter Mondale, Mark Updegrove, Fred Malek, George Wallace Jr., and Peggy Wallace, among others.