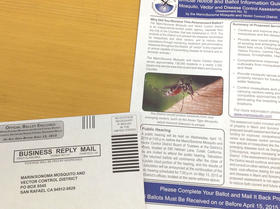 But this is not a typical election.

The Mosquito District will hold its only public hearing on the assessment election on the evening of April 15th. Voting will close at the end of that hearing, with the results to be announced on May 13th. 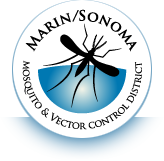 Yvonne Van Dyke is the current president of the Marin-Sonoma Mosquito, Vector and Disease Control District’s Board of Directors. A retired accounting from Cotati, she supports the assessment increase. But, like Egger, she also sees their pension costs as a potential pitfall, and notes that the district has recently moved to keep the problem from getting worse.

Board member Frank Egger, who remains critical of the ballot measure, contends that the Mosquito District needs to get its financial house in order before asking landowners to pay more.

Sonoma County owns hundreds of parcels within the District, and with them holds thousands of votes to be cast in this election. But political observer and columnist Dick Spotswood questions how the county is handling its decision –making.