Most Isolated Tribe In Continental U.S. Gets Broadband 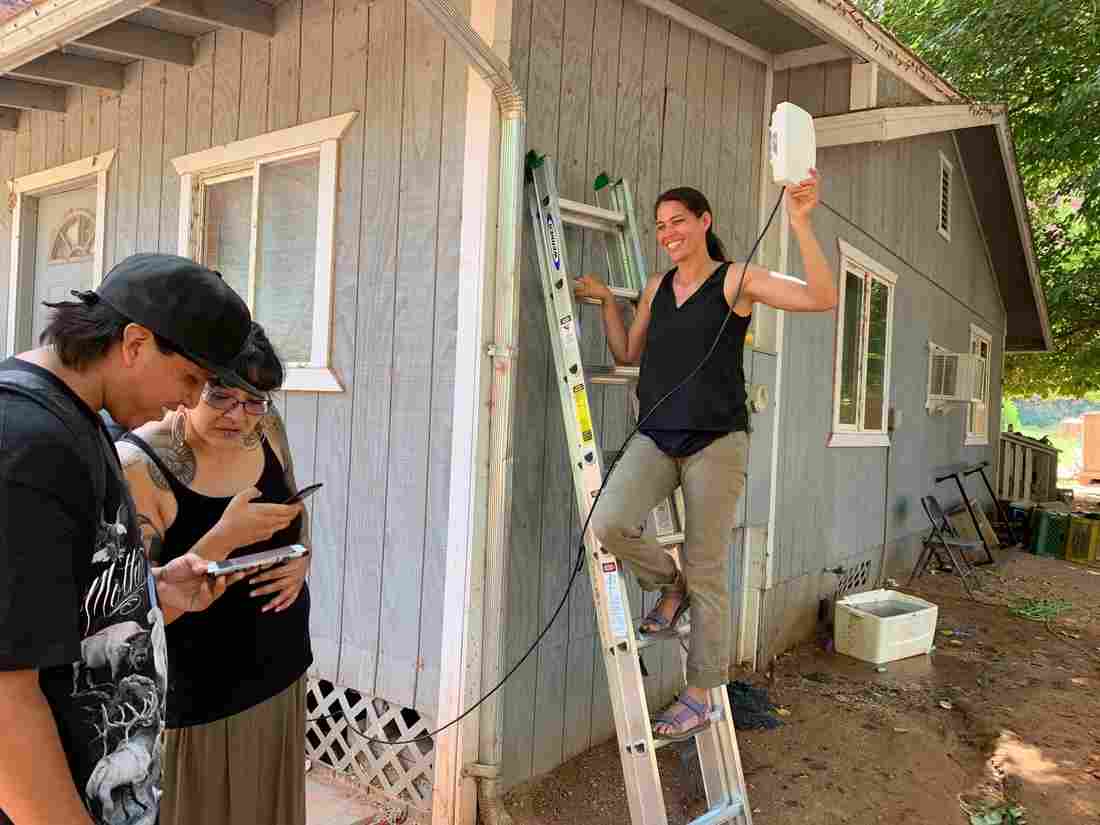 the WiFi signal on their phones. Laurel Morales/KJZZ hide caption 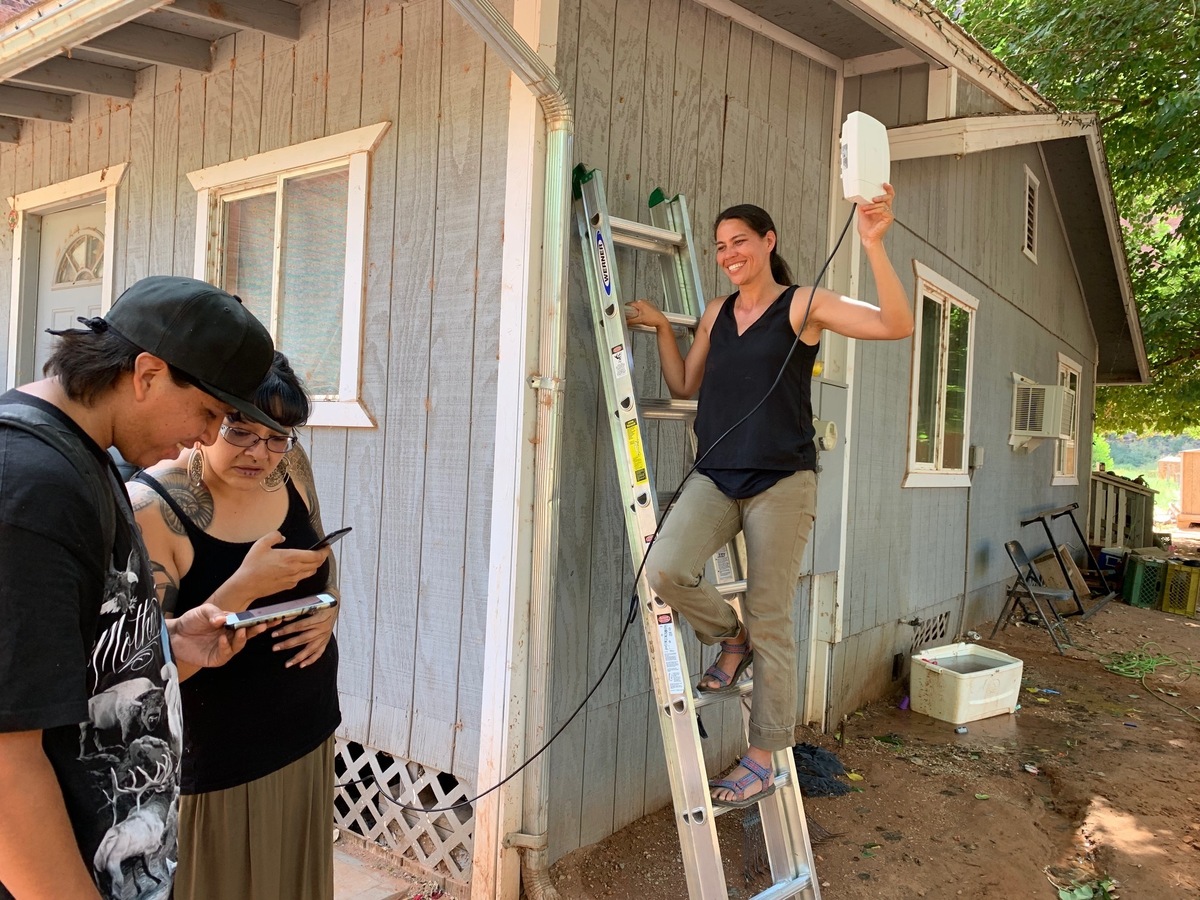 Nestled among turquoise blue waterfalls and cottonwood trees, the tiny Havasupai reservation is only accessible by foot, by mule or by helicopter. It's a five-minute flight from the rim of the Grand Canyon to Supai Village on the canyon floor, where 450 tribal members live in small homes made of panel siding and materials that can be easily hauled or lifted in.

It's no wonder Internet access has been a challenge. But recently, the Havasupai have had some help from the Oakland-based nonprofit MuralNet.

"Look at that," MuralNet CEO Mariel Triggs says as tribal members look at smartphones. "We got bars! Dang!"

We were able to put up a network in just a few hours for less than the cost of a Toyota Corolla.

Triggs trains the Havasupai how to install a network box outside a home. MuralNet — with the help of Flagstaff-based Niles Radio — built what's called a microwave hop from towers at the Grand Canyon's rim that beam a broadband signal down to Supai Village.

"And we were able to put up a network in just a few hours for less than the cost of a Toyota Corolla frankly," Triggs says.

The total cost was closer to $127,000. Triggs says the isolated geography wasn't the issue. Rather, policy was holding up the process. The Federal Communications Commission finally granted the tribe a permanent broadband license last spring.

Now the Havasupai want to increase the signal strength, but they've run into another hurdle. A second Internet provider, GovNET, says it may be interested in bringing broadband here. So now the FCC is dealing with concerns over competition while it is considering expanding the village's signal strength.

"We have the funds," Triggs says. "We have the money. We could do it. We could put materials that are needed in the towers and connect everything, but we have to wait for all this policy stuff again to sort out." Triggs worries that process could take years. "It just kills me because I feel like policy is actually causing the digital divide right now rather than helping to fix it."

Currently only seven Havasupai families can connect, including the Balderrama family. Sally Balderrama's son Evan is 9, but tests at the kindergarten level. A therapist flies down into the canyon twice a month to work with Evan and other kids with special needs.

Thanks to the new Internet connection, the therapist can now work with Evan three times a week via Skype. Balderrama says she has noticed a big difference in her son, but there are still technical problems. 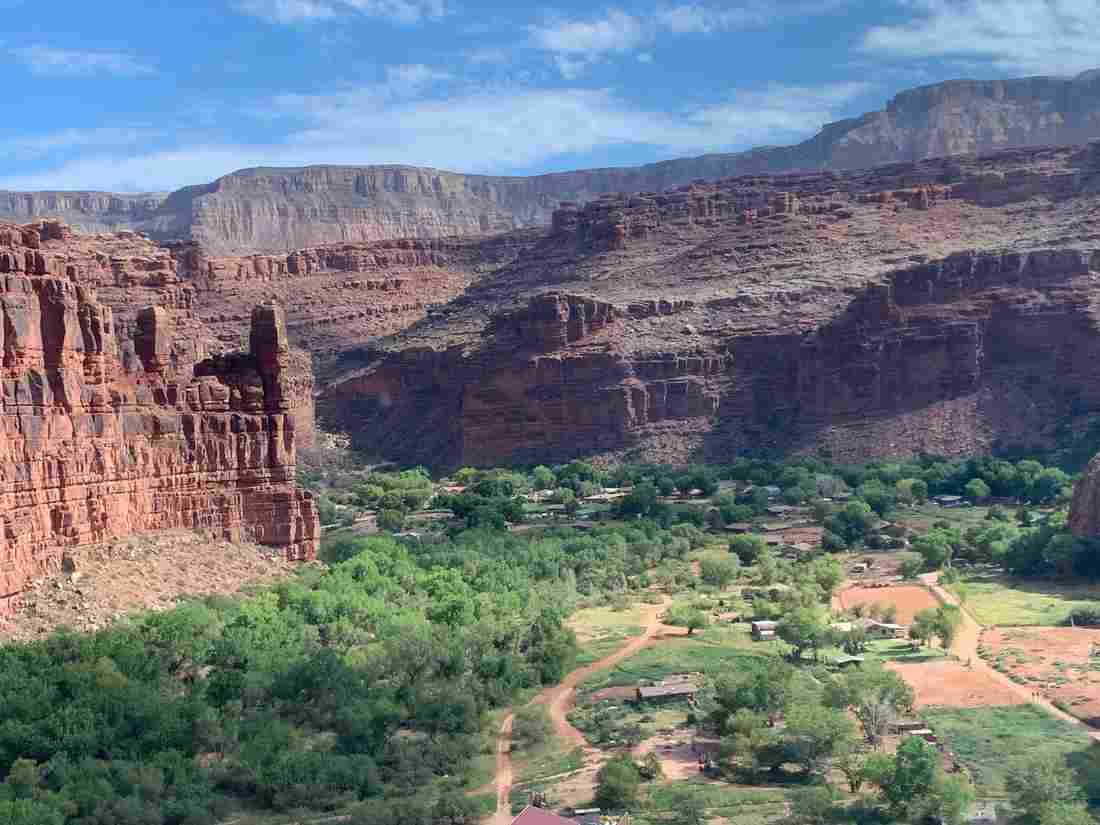 About 450 Havasupai live in the remote Supai Village at the bottom of the Grand Canyon. The tribe has tried to get broadband in the past, but the process has been difficult to navigate. Laurel Morales/KJZZ hide caption

"The Internet is good," Balderrama says. "It is. But we have times when it pauses and it spins and that's kinda frustrating."

The increased connectivity has helped all students in the village, not just those with special needs.

At the Supai Village's Head Start Center, director Carlos Powell tries to get 20 toddlers to take a nap.

"Remember, boys and girls, you don't have to go to sleep but you have to rest your brain because you were thinking so hard today," Powell tells them.

He and his teachers now have access to the Internet so they can keep up with federal certification requirements.

"The only way we can accomplish that is through broadband," Powell says. "Having to send my teacher out for a semester would be way, way expensive for this tribe and that teacher to do."

Havasupai Councilwoman Ophelia Watahomigie-Corliss is trying to get the tribe more reliable high-speed Internet for a whole host of other reasons. Among them: teens could take high school courses online instead of being sent away to boarding schools; community members could train to to do the jobs the tribe outsources now; the Havasupai could have better emergency communication during one of the region's many flash floods; and they could have better access to health care.

For Many Navajos, Getting Hooked Up To The Power Grid Can Be Life-Changing

"We have different generations of telemedicine equipment that have just been sitting around collecting dust because [broadband] has been unable to be established," Watahomigie-Corliss says. "Broadband speeds, high speed Internet, those things are specific."

Meanwhile, the FCC estimates at least a third of people living on tribal lands don't have access to high-speed Internet. So the agency is giving tribes first dibs on applying for available broadband spectrum — ahead of commercial companies — at the beginning of 2020.

But the problem is twofold: The window to apply is short. And the FCC would require the tribes to build their infrastructure — the towers and antennas — in half the time required of major telecom companies.