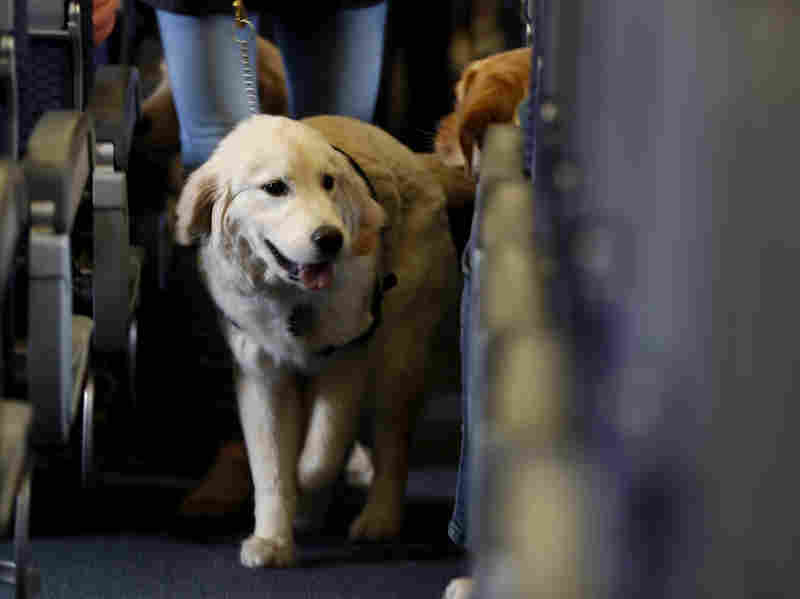 A service dog onboard a United Airlines plane at Newark Liberty International Airport in 2017. The Department of Transportation

says it will require service dogs to be flown free of charge, but not emotional support animals. Julio Cortez/AP hide caption 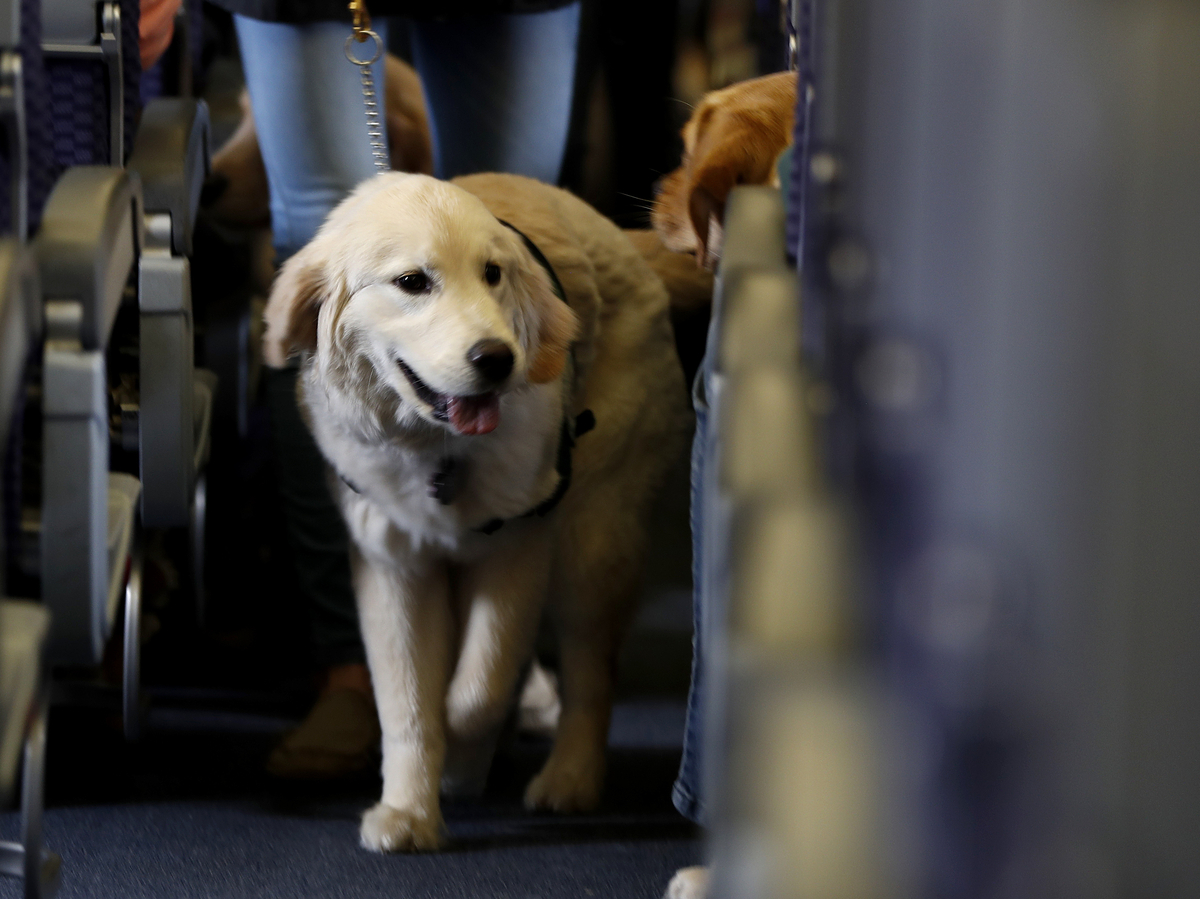 A service dog onboard a United Airlines plane at Newark Liberty International Airport in 2017. The Department of Transportation says it will require service dogs to be flown free of charge, but not emotional support animals.

The Department of Transportation said Wednesday it will no longer require airlines to make the same accommodations for emotional support animals as they do for trained service dogs. No more guaranteed free flights for comfort cats and dogs, therapy monkeys or miniature horse companions.

A service dog is trained to do work or perform a task to benefit an individual with a disability. Emotional support and psychiatric service animals function therapeutically. And starting in 2021, it will be up to individual airlines to decide whether or not treat the two the same.

The DOT said complaints by passengers with disabilities, inconsistent service animal definitions, fraudulent representations and animal misbehavior drove the change in policy. Also, disturbances brought about by requests to transport "unusual species of animals onboard aircraft," have compromised the public trust in recognized service animals, the department said.

In 2018, a woman in Newark, N.J., tried to get her peacock, Dexter, onboard a United Airlines flight. A woman and her emotional support squirrel were booted off a flight out of Orlando, Fla., later that year.

The DOT considered permitting miniature horses and Capuchin monkeys that are legitimate service animals, but ultimately decided against it. The department received comments in support of miniature horses. 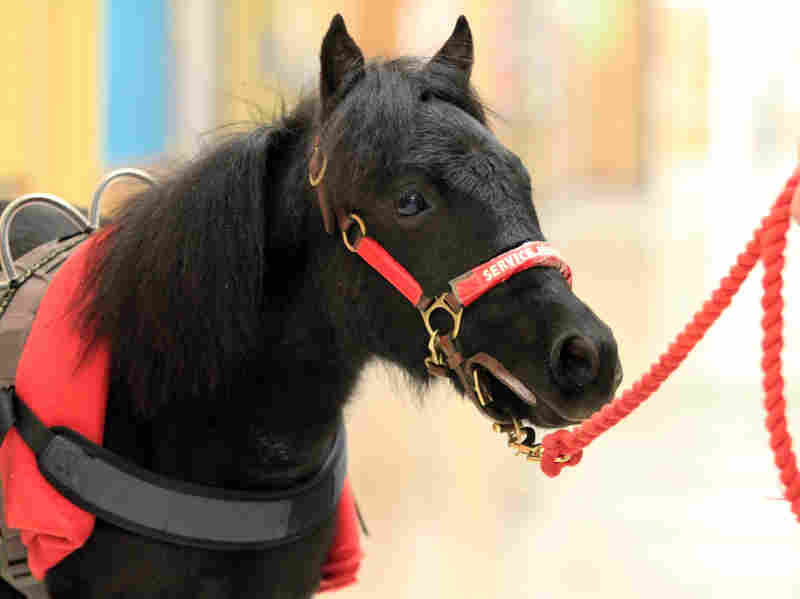 Zoe, a miniature service horse, pictured in 2013. The Department of Transportation contemplated including miniature horses as accepted service animals on flights, but ultimately decided on service dogs only. Dan Joling/AP hide caption 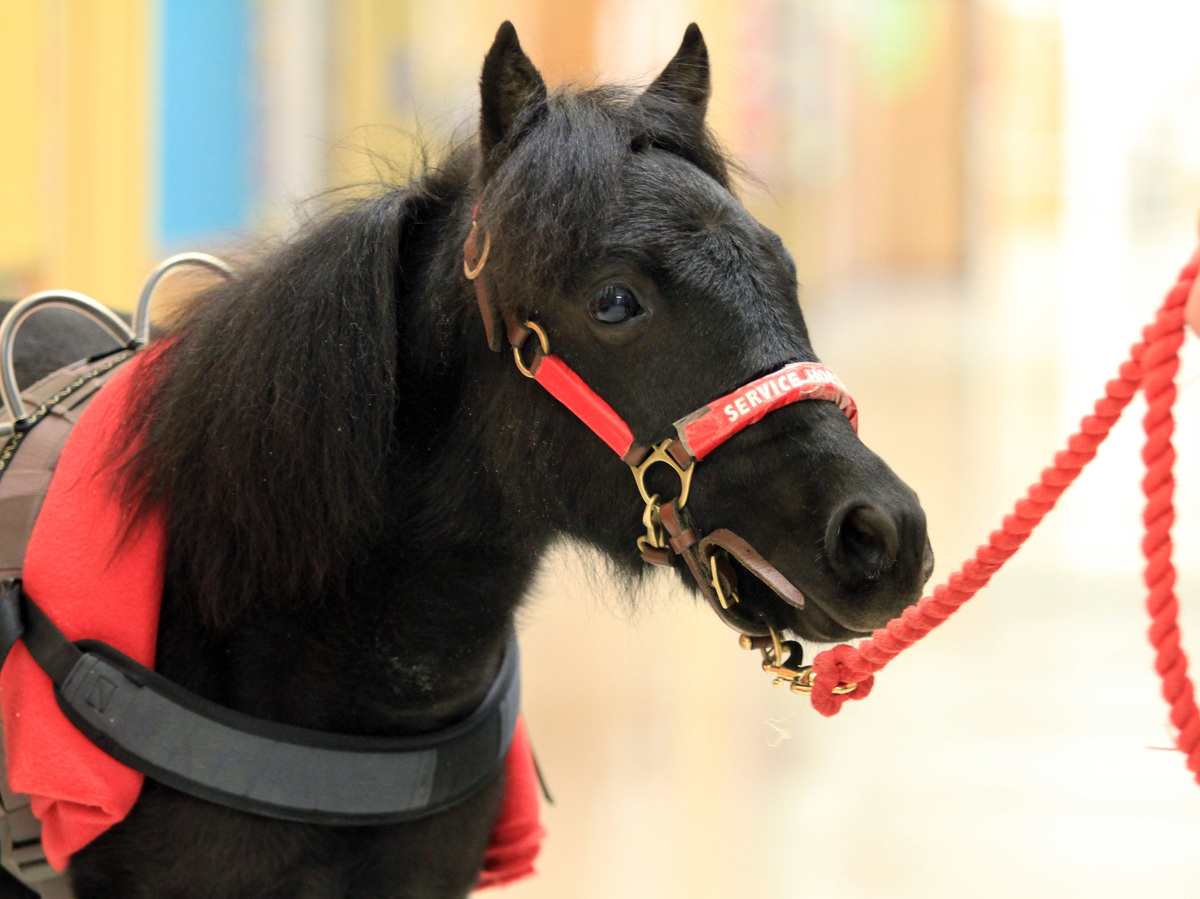 Zoe, a miniature service horse, pictured in 2013. The Department of Transportation contemplated including miniature horses as accepted service animals on flights, but ultimately decided on service dogs only.

Psychiatric Service Dog Partners, a nonprofit group based in South Carolina commented to the DOT, "Many miniature horses are comparable in size to a St. Bernard, and that many can fold their legs and lie down more easily than their larger equine counterparts." Another service dog organization added that a miniature horse should be 34 inches or shorter, if measured from its withers; slightly smaller than a Great Dane.

Although a Great Dane may be marginally larger than a miniature horse, it cannot be discriminated against based on breed. There are several instances in which a service dog may not be allowed to fly. According to the new rule, a service dog may be denied if: the animal poses a direct threat to the health or safety of others; the animal causes significant disruption in the cabin or at the airport; or the animal's carrier with a disability fails to provide the necessary paperwork.

The animal could also be turned away if it violates "applicable safety or health requirements of any U.S. federal agency, U.S. territory or foreign government." Individuals traveling to Hawaii with service animals or guide dogs must have appropriate documentation of the animal's vaccinations. Australia requires all animals, including service dogs, to undergo a quarantine period, even if accompanied with the appropriate paperwork. They take it very seriously.

In 2015, actor Johnny Depp's Yorkshire terriers, Pistol and Boo, were almost sentenced to death after entering the country illegally, NPR previously reported. Barnaby Joyce, Australia's agricultural minister at the time, told Depp the animals would be destroyed if they weren't removed voluntarily. Pistol and Boo were hustled out of the country.