Luther Burbank’s greenhouse is an icon of Santa Rosa, but the famed horticulturalist actually did most of his ground-breaking work at another site—his 18 acre Goldridge Farm in Sebastopol.

Burbank is justly renowned for his botanical innovations, but not everything he worked with was a success. In fact, explains horticultural historian Bob Hornback, Burbank also is the source of two highly conspicuous “escapees” that are now ubiquitous in our local landscape, including the one shown here.

The Open House at Goldridge Farm this weekend is part of the annual Sebastopol Apple Blossom Festival, which primarily celebrates the area’s Gravenstein orchards. Hornback says that was one variety of apple that Luther Burbank didn’t do much with, although he did create the later-ripening Winterstein variety (seen in photo). 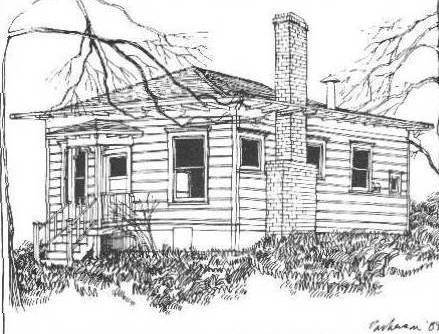 With hundreds of new fruit varieties, vegetables and ornamental plants and flowers to his credit, Burbank’s farm (including the cottage, as seen in this drawing) was the scene of constant multiple experiments, graftings and new hybrids. During so much required maintaining detailed records, says Hornback, which is something Burbank doesn’t get enough credit for doing.