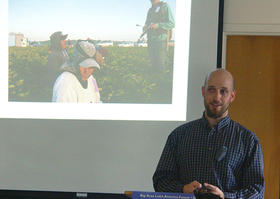 The group of farmworkers he joined were willing enough to allow him to work and travel with them, Holmes recounts, but gaining their trust took more than five months.

Among the substandard conditions that Holmes experienced along with his co-workers were numerous instances of workers’ rights violations, both in terms of workplace safety, and simply getting paid fairly. Although some instances were more deliberate than others.