Biologists are trying to bring Coho Salmon back from near extinction in the Russian River. The breeding program at the core of this effort just got an upgrade. 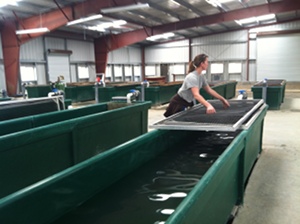 Biologist Francis Hourigan inspects the young fish in one of the tanks at the new hatcheryCritics complain hatcheries are bad for wild fish populations, diluting the genetics of wild stocks. Senior biologist at the California Department of Fish and Game, Eric Larson, explains what is different about the Russian River Coho Salmon Captive Broodstock Program.