More than 50 years ago, Patricia Winters got her first bat, and promptly fell in love with it. As an advocate for the small nocturnal flying mammals, she was known throughout the North Bay and beyond as the Bat Lady. She died of cancer at age 70 recently, but shared her enthusiasm and knowledge in an early North Bay Report from January 2006. This is a repeat of that report.

How does someone become “the Bat Lady”?  In her case, recalls Patricia Winters, it started almost half a century ago.

Bats are moderately common in North America, but far more prevalent in the tropics, where they play an essential role in propagating fruits and other crops.

This is a Mexican free-tailed bat in flight, one of the more common species in northern California. Because of their echolocation sounds, bats actually make a lot of noise as they fly at night, but those sounds are at pitches to high for human hearing.You can listen to the echo-location sounds of a Mexican free-tailed bat, transposed into the rage of human hearing, in this audio clip. 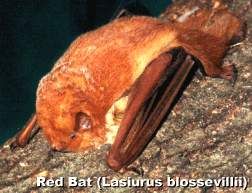 For contrast's sake, here is the sound of what Patricia Winters calls a microwave popcorn echo. This bat send out its sounds between a gap in ins front teeth, so that the echo will no reverberate inside its mouth.

The Statewide Integrated Pest Management program at UC Davis offers this online resource to guide homeowners in dealing with bats generally and  on their property.

There are places where thousands of bats live together in caves or underground, and emerge in great clouds as the day turns dark. Here's a video of such an emergence.