Vision for Greenway to Spring Lake

The report also addresses implementation, starting with the recommendation that the community work closely with Caltrans to develop the Greenway as a corridor for alternative transportation, offering safe routes to school and ways to move around the neighborhood without a highway or motorized transportation.

Looking beyond the Greenway, the consulting team recommends appropriate development at strategic locations to provide neighborhood amenities and put eyes on the Greenway. They also recommend an entirely new idea for the intersection of Farmers Lane at Highway 12 – a greenway gateway. 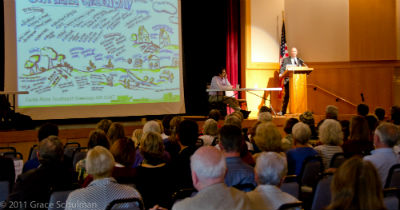 The AIA report provides a roadmap for turning the community’s good ideas into a real Greenway. Plan to attend the next community meeting at the Glaser Center on Saturday, December 3, from 10:00 am to 12:00 noon and weigh in on plan ideas and the action steps needed to move forward.

The Southeast Greenway Campaign Committee has been busy addressing the key recommendations of the AIA’s Sustainable Design Assessment Team (SDAT). Their most exciting recommendation involves working with the City and Caltrans to create an initial trail along the Greenway. The Campaign has identified a transportation-consulting group with extensive Caltrans experience to help prepare for and convene a meeting with Caltrans.

Another recommendation suggests that the Southeast Greenway campaign use the AIA’s Final Report as an initial road map to engage City and County officials in preparing a “white paper” or “development plan” for implementing the Greenway and building toward a general plan amendment. This is underway.

Get involved in making the Southeast Greenway a reality. Come to the community meeting on Saturday morning, December 3rd, 10 am to 12 noon at the Glaser Center. The Southeast Greenway Campaign team will be sharing these plans with you and asking for your feedback, ideas and involvement.