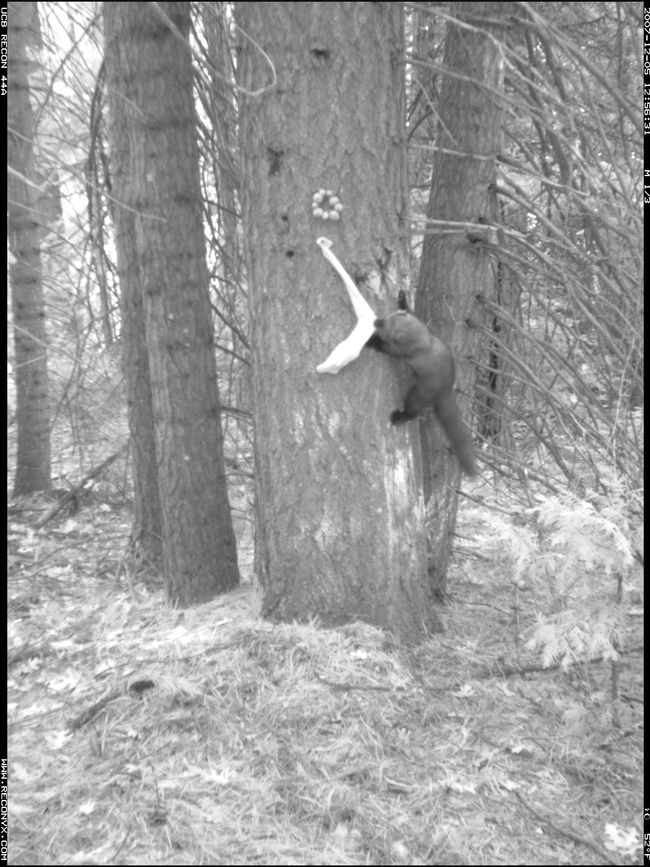 The researchers are going through 250 pairs a month, at a considerable cost, to create the “chicken in a sock” bait stations to survey the distribution of Pacific fishers in a 500-square-mile area of forest near Bass Lake. Besides the cost, Rick Sweitzer, UC Berkeley wildlife biologist and project leader. is spending time in the Wal-Mart checkout line with a cart full of socks when he could be doing research.

The scientists don’t need new socks; they would prefer old, unmatched, non-holey ones, something everyone has cluttering up their sock drawers. In an effort to reduce, reuse and recycle, the SNAMP wildlife research team is putting out a call for lost and lonely socks. Socks may be delivered or mailed to 40799 Elliott Dr., Oakhurst CA 93644.

The Pacific fisher is a small, nocturnal carnivore that perches and dens in large, old-growth pine and oak trees. Once widespread across the high elevation forests of the Sierra Nevada and in the coastal mountains of northwestern California, fishers are now only found in two small isolated populations. One group lives near the California-Oregon border. The others are in the southern Sierra Nevada.

Data being collected by UC scientists about the movements, habitat preferences and survival of fishers in the southern Sierra Nevada will be used to aid the multiple agencies, academic institutions, environmental groups, and mountain residents who are working together to ensure that long-term wildland management promotes forest health, wildfire control and wildlife conservation.