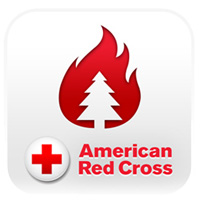 The American Red Cross has released its official Wildfire App, putting lifesaving information directly into the hands of people who live in or who visit wildfire prone areas. This free app—available in English or Spanish—is for use on both iPhone and Android platforms. Given numerous fires in the North Bay in recent months, the app could have significant impact in this area, especially in rural, isolated areas.

"The Wildfire App gives North Bay residents instant access to our 'Blaze Tracker' features so they can prepare their households and businesses and make critical decisions that can save lives." said Tim Miller, Regional CEO. Just since early August, there have been four significant fires responded to by local Red Cross volunteers.
• August 13, the Wye Fire in Lake County,
• August 26, the North Pass Fire in Mendocino County
• September 7, the Scotts Fire in Lake County
• October 18, the 29 Fire in Lake County. 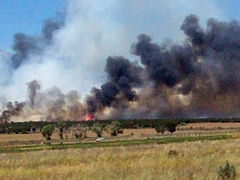 The Wildfire App includes the "Blaze Tracker" trio of features-which can be customized for alerts specific to locations where they live, travel or have loved ones:
o "Blaze Warnings" which let users see areas where NOAA has issued warnings that conditions are favorable for potential wildfires;
o "Blaze Alerts" inform users when a wildfire has begun within 100 miles of any locations monitored;
o "Blaze Path" from Inciweb.org which provides users with a current view of an existing wildfire's perimeter, how it has spread and the fire's current location when available.

The app also provides comprehensive reporting of all wildfire activity for every geographic area in the United States; and One touch "I'm safe" messaging that allows users to broadcast reassurance to family and friends via social media outlets that they are out of harm's way.
The Wildfire App can be found in the Apple App Store and the Google Play Store for Android by searching for American Red Cross.

This year, the national Red Cross has launched 11 major wildfire relief operations spanning 10 states. According to the National Interagency Fire Center, as of October 4, wildfires have burned 8.8 million acres in the United States this year. The Wildfire App comes after the highly successful First Aid, Hurricane and Earthquake Apps, which have more than 1.2 million users.

The Wildfire App comes after the highly successful First Aid, Hurricane and Earthquake Apps, which have more than 1.2 million users.