A Lone Wolf Travels Toward California

The available historic information on wolves in California suggests that while they were widely distributed, they were not abundant. DFG has been compiling historic records, life history information, reviewing studies on wolf populations in other western states, enhancing communication with other agencies and training biologists on field techniques specific to wolves. This effort is to ensure that DFG has all necessary information available when needed, it is not a wolf management plan and DFG does not intend to reintroduce wolves into California 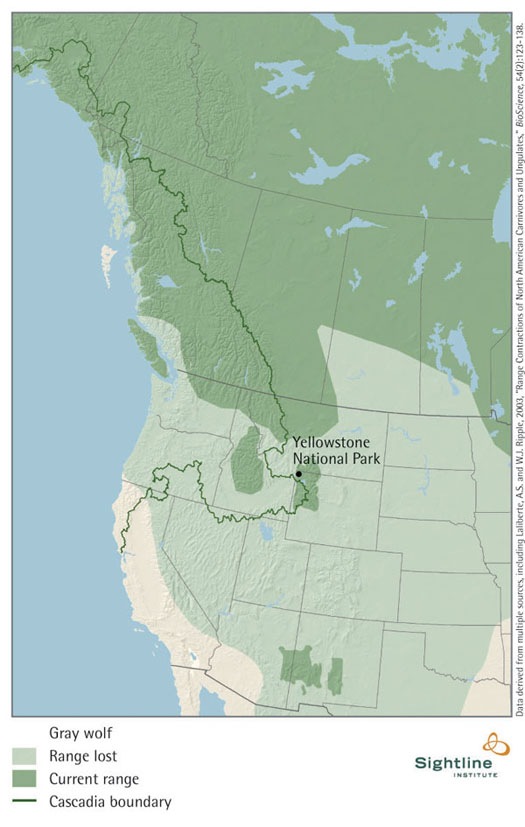 There are more than 1,600 wolves in the northern Rocky Mountains following a federal reintroduction effort which occurred in the mid-1990s. In 1999 a single wolf crossed into Oregon from Idaho, after nearly a 60-year absence in that state. There are now at least 23 wolves in Oregon in four reproducing packs. It has taken an additional 12 years for the first wolf to now approach the California border.

This particular animal is exhibiting normal dispersal behavior for a young male and there is no way to predict whether he will enter California, stay in Oregon, or travel east into Nevada. Eventually, DFG expects that wolves will reach California. Whether this will lead to the establishment of packs or simply transient individual animals is unknown.

Gray wolf recovery in other western states has been controversial, particularly regarding impacts on prey populations, livestock depredation and human safety. There have been instances where gray wolf predation has contributed to declines in deer and elk populations, however, in most cases, predation has had little effect. Some gray wolves have killed livestock - mostly cattle and sheep - while others rely entirely on wild prey. In other western states the impact of depredation on livestock has been very small, certainly less than predation by coyotes and mountain lions, although the effect on an individual livestock producer can be important, particularly when sheep are killed.

Concerns about human safety are largely based on folklore and unsubstantiated in North America. In recent years there was one human mortality in Canada caused either by wolves or bears and one confirmed human mortality in Alaska by wolves. Based on experience from states where substantial wolf populations now exist, wolves pose little risk to humans