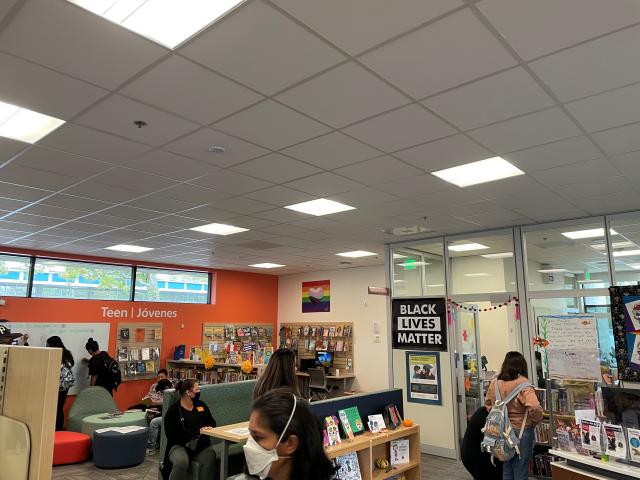 photo credit: KRCB/Noah Abrams
For some, public libraries are meant to be neutral ground when it comes to civic disputes over culture, values, and identity in America. That's not always the case, including in Sonoma County.
Walk into any one of the 14 different public libraries around Sonoma County and you’ll likely see Pride and Black Lives Matter banners. After a Black Lives Matter display was vandalized in Sebastopol a year ago, library leadership sought to reaffirm the library as an inclusive space, according to interim county library director, Erika Thibualt.
"The library administration had some signs created, and this was the former director Ann Hammond's decision," Thibault said. "We had a Black Lives Matter sign created and we sent that out to all the branches and encouraged them to hang it in support."
Though Thibault was not behind the decision to display the banners, she is now in charge during a moment of consternation over the signage amongst some members of the Library Commission, the system’s appointed governing board.
"We have some commissioners who, you know, are a little uncomfortable with, with our choice and wanted us to have a policy," Thibault said.
Because library buildings are owned by local municipalities, Thibault said current library policy only covers internal displays.
"We leave it to the discretion of the branch manager to make that decision," Thibault said. "And we currently have a library policy that controls external organizations and what they can and cannot bring to our libraries and then have us post."
Displays from outside organizations are only allowed from sectarian and non-partisan groups.
At the Library Commission’s meeting earlier this month, Commissioner Paul Heavenridge voiced his concern over neutrality because of internal signage.
"I see red flags ahead if we don't have some kind of real policy," Heavenridge said. "I mean, our diversity statement is a good one, and that's what we are, that's what a library is. It's the last bastion of democracy I feel."
Commissioner Barbara Mackenzie expressed specific concern over the display of Pride and Black Lives Matter signage.
Thibault said the literature available via the library has not come under scrutiny.
"We actually signed the Urban Libraries Council Declaration of Democracy and the Freedom to Read, which is an American Library Association statement, and they are unanimously in supportive of that," Thibault said. "So we don't have any issues when it comes to our materials."
While other commissioners expressed support for the current policy, further discussion is expected at an upcoming meeting.
Editor's note: this story has been updated with a correction to the title of the American Library Association's statement, the Urban Libraries Council Declaration of Democracy and the Freedom to Read. We also added "For some," to the first sentence to more accurately reflect that the perception of public libraries as 'neutral ground' is not universal, and to acknowledge the position of Sonoma County Library communications manager and public information officer Ray Holley. In an email to KRCB, Mr. Holley says the American Library Association and other leading organizations state that libraries are not neutral. We will continue our reporting on this issue, and if possible, will air and publish a conversation with the American Library Association about the concept of library neutrality in the coming days.