Community, recovery, future, all on the mind at Healdsburg's Raven Theater 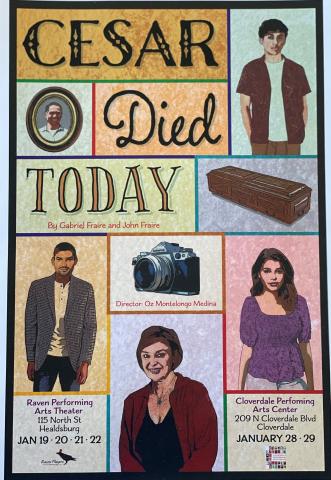 photo credit: Gabriel & John Fraire, The Raven Theater
How are local performing arts venues faring after the dark days of the pandemic? In Healdsburg, the return of live performances have breathed new life into the Raven Theater.
Their latest production: Cesar Died Today from playwright Gabriel Fraire.
"As a writer, people always come up to you and say, I got this great idea for a book," Fraire said. "You know, so I learned early on to say, man, that is a terrific idea. Here's what you do. You go home, you type out 200 pages and we'll get started. Well, no one ever comes back"
For Fraire, a local writer, playwright, and longtime Healdsburg resident, that rule holds true…unless he’s talking about his brother and co-playwright, John.
"He cornered me at a wedding," Fraire said. "He said, let's do a play about Mexicans. If it's written by Mexicans, I'm sure we can find a producer. I said, okay, John, you go home. You know, you're right out the first stack, and then we'll get started. Man, within a week he had it, and this was so long ago, he sent me floppy disk."
Fraire said their play, Cesar Died Today, draws on both personal and universal family dynamics.
"It's basically three siblings that all have secrets they're trying to keep from the family," Fraire said.
Fraire said the centering of Latino actors in a play touching on Latino issues is important for him.
"What's really great, at least for me, is just to have Latinos on stage," Fraire said. "I tell the actors this, don't ever forget that anytime you're on stage, there's just a great opportunity that there's going to be a Latino in the audience who's going to see you and going to say, wow, I maybe I can do that; and that is so important."
Just as important, Fraire said, is the universal appeal.
"Even though this play may appear to be Latino-centric, it's universal in its appeal," Fraire said. "One of the nicest compliments I ever got was after a performance, a lady cornered me and she says, oh my God, that mother was just like my mother; and we're Lithuanian."
The Raven’s artistic director is Steven Martin. As is the case for so many theaters, Martin said Covid spurred a number of changes.
"Kind of one of the upsides of the pandemic, I know that sounds strange to say," Martin said. "It gave us an enforced pause, you know? Cause we couldn't do live theater and we did Zoom shows and we did radio Shakespeare, and we did a whole series of original radio dramas, which was kind of fun actually."
"While you're doing it, you're convincing yourself that, ah, this is good," Martin said. "This is really good, this is good. This is, this is good; and then once you get to do live theater again, you say, oh, it was crap. This was terrible. What a horrible experience."
Martin said the recent changes were needed.
"I made a big deal about saying, this is a community theater, so it's of, by, and for the community," Martin said. "And then you kind of realize, well, we've been ignoring 30% of our community, which is Latino. And Healdsburg's got a pretty robust Latino community, and the Raven has not been exactly welcoming to that, and getting people the through the doors and saying, hey let's tell your stories too."
Martin said he linked up with Fraire by chance.
"I'd been actively trying to find a Latino writer, play, some story we could share," Martin said. "And it was another playwright, Jacqueline Wells, who introduced me to Gabe, and I'd had no idea Gabriel was actually a Healdsburger."
The theater’s ScripTease program has been a driving force for some of the changes in the theater’s programming, including helping to bring Cesar Died Today to the stage in Healdsburg.
"We solicit new plays, original plays," Martin said. "We do, public readings of the ones that we find most interesting that we're going to consider for full productions, and we do them in partnership with Healdsburg Center for the Arts."
As a small community theater that relies heavily on volunteers, there are some understandable limitations to which scripts are accepted according to Martin.
"And a lot of it is, are these stories relevant?" Martin said. "Are they exciting, are they engaging? And from the practical point of view, can we do it? I mean, if it's a cast of 200 people and you know, it has 27 scenes, no, we're not going to do it."
Moving into the fourth calendar year of Covid, Martin said live theater at the Raven is rebounding, but moving back indoors was tough.
"We were not drawing as well as we had before the pandemic," Martin said. "I touched base with other artistic directors just to make sure it wasn't just us and it wasn't. But over the last year, plus it's slowly grown and we're back to where kind of pre-pandemic levels [were], maybe not quite that much, cause I still think there are some people that are never going go to a public theater again."
He says he’s excited for what the future brings…whatever it may be.
"That's that thing about having a chance to rethink things, is that, you know, moving forward, you know, we knew that, or I felt like we're never going go back to the way it was," Martin said. "We've got to figure out different ways. Is it Zoom? I don't think it is. Is there a combination of something else? Maybe. I don't know what it is yet, but there's something out there that we haven't hit upon yet."
Cesar Died Today debuted at the Raven Theater on Thursday, January 19th for a four day run, before a weekend run in Cloverdale on January 28th and 29th.