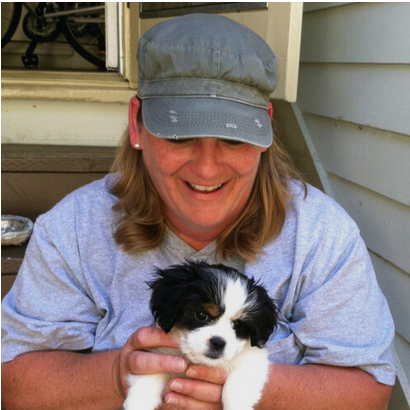 Jen Wertz
photo credit: Courtesy Russian River Alliance
While state and federal disaster recovery groups like the Red Cross and FEMA are still mobilizing, the nonprofit Russian River Alliance is already handing out aid.
Through fire, flood, personal setbacks and tragedy, gift cards handed out from a minivan is often the first bit of help offered.
"Larger organizations will come and start allocating resources and they generally have a lot more resources. But it takes them a little bit. My place has started to become immediate needs for disaster relief," said Jen Wertz, fund manager of the Russian River Alliance.
"I was out helping the evacuees get their trailers towed out of the flood zone and giving people gift cards. We purchased some generators to start a loner program because the power was off for so long this time, so that next time the power is out for an extended period of time we can have generators here to loan."
A flagger for a traffic control company, Wertz and the Alliance, which she described as a very small nonprofit, got started with an emergency, fifty-thousand dollar county grant during 2017 flooding. Since then, Wertz has aided hundreds and raised tens of thousands in private donations.
She said the need in lower Russian River communities is real.
"We have a lot of service and hospitality industry workers in the lower river area, because it's a tourist destination and we absolutely need these people. Somebody needs to do the dishes and clean the rooms and work at the grocery store, and they are kind of the backbone of the town that makes everything work. But, unfortunately those jobs don't pay a living wage and they are very seasonal and the cost of housing has become completely unaffordable for these folks and on top of that we've had disaster after disaster after disaster."
Much of the funding helps cover rent and utilities that tenants can't afford.
"Working people are very reluctant to ask for help when they need it, because they have this sense of pride. But when they did, they weren't asking for very much, because as it turns out they've already found the most affordable housing situations. For example, there was somebody that worked here in town and a family of four just needed seven hundred dollars so their rent check wouldn't bounce. That small amount of money went a very long way. I think we prevented like thirty local working households from becoming homeless for less than fifty thousand dollars."
During recent flooding, Safeway donated $5,000 worth of gift cards. The group bought another $15,000.
She views her work as a supplement to official aid programs. Though she can't meet every challenge, helping with immediate needs can make a big difference to those enduring extreme hardship.
"We're pretty light on our feet. I can just go out, right now, hop in my minivan and go drive around and start handing out gift cards. They have to organize their staff, coordinate with other agencies. The recovery center, I went there and I was like wow. They had the Red Cross there, they had the Economic Development Board there. Different nonprofits brought staff in to act as case workers. It was very organized and they were able to assist a lot of people in a very organized way, but they can't set that up in an hour, that takes a few days at least to get going, so I'm kind of filling that immediate need in between stuff."
While the Russian River Alliance does vet applicants, Wertz says they've intentionally kept their process from being onerous.
"We've tried to simplify that as much as possible to make it less of an obstacle, one thing that's in our favor here is that this is a very a small community. Most of the local workers in downtown Guerneville, I know them. When they contact me I know, Sally works at whatever business downtown when she calls me. If I'm not familiar with the person then we do verify that they meet our criteria by either contacting their employer or asking somebody else that works there, that kind of thing."
The group, which largely raises money through social media and word of mouth, is expecting delivery of ten generators it intends to loan out during blackouts.