Many still in need as storm relief funds run out 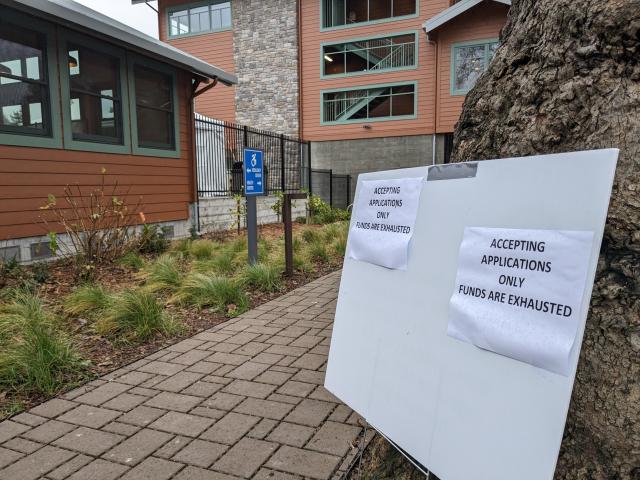 Outreach workers continued 20-minute intake interviews with no promises aid would come
photo credit: Marc Albert/KRCB
Special county relief funding had already run out Wednesday as a few people were still turning up at Guerneville's community health center, hoping to get help.
Waitress Anna Haynes was among them.
She said riding out the storm itself had her on edge.
"The trees falling all around us. That was scary, hearing the trees crack and those break, but luckily, our home was not damaged. The water ended up not coming in the back."
But, she says, she's probably out more than $600. Just about everything in her refrigerator and freezer wound up tossed. And she and her three children had to shell out for a hotel room.
"My apartment, people from 2-1-1 came by, was like, 'we're offering rooms.' I tried to reach out to 2-1-1 and they're like 'all of our vouchers are gone," lucky me.
This isn't her first time missing out on promised aid. Evacuated during wildfires, Haynes says she had similar results interacting with FEMA.
"Even though I was in the newspaper, it wasn't enough proof that I was out, in the area, so they never even reimbursed me for that."
She says she was unable to get time off from work to apply until Wednesday, but by then it was too late.
Another local resident, Mike Bernard, runs a business renting decorations to wineries and other venues...he says he suffered a setback of at least $5,000.
"The creek behind my house kind of flowed, through the back of my garage and out the front and I have a lot of storage in boxes and stuff and its all destroyed, the boxes and its a mess. There's mud and water and just muck."
He estimates it will take at least several days for him and a small team of friends to assess what's salvageable and clean up.
Like Haynes, he was unable to apply for aid until Wednesday.
"They ran out of funds really pretty quickly there was so much need, and it was first-come-first-served and I'm here, I don't know how many days they've been doing this but I'm here at the end."
For Haynes, with three children, the financial hit is a real setback. Earning back the money isn't that big of an issue. Saving that amount however is another story.
"I don't know. To be honest with you, I want to say, at least, something like that at least a few months of work. Especially right now, because right now is slow times out here for us, especially with the food costs and everything, nobody's really going out to eat, so a lot of servers right now are struggling."