Rain and research opportunities abound with parade of atmospheric rivers 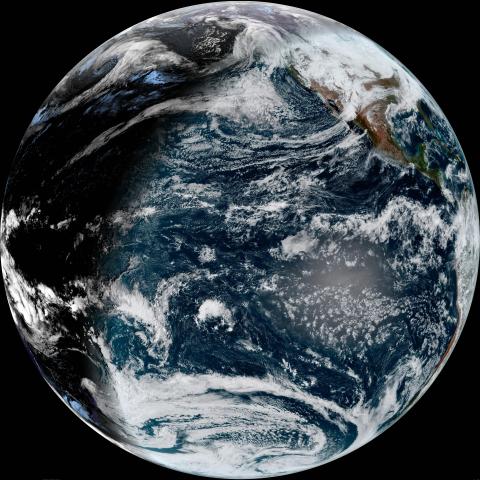 photo credit: NOAA GOES West
The series of atmospheric rivers hitting the west coast have caused serious damage to infrastructure. The storms are also being studied extensively, including by Ryan Torn.
"My work relates to understanding what is the predictability of landfall atmospheric rivers on the west coast of the United States," Torn said.
Torn is the chair of Atmospheric and Environmental Sciences at the State University of New York at Albany, and a researcher of atmospheric rivers at the Center for Western Weather and Water Extremes.
"What are the factors in the processes that allow us to predict those features well in some circumstances," Torn said. "And what are the circumstances and processes that create a lack of predictability?"
With the increasing volatility of atmospheric rivers, Torn said the research is needed.
"You know, atmospheric rivers are happening in a part of the world that's not very well observed by what we call the conventional network of observations like our aircraft, our weather balloons, our surface stations," Torn said. "And so what we hope to do in the atmospheric recon field experiment is to take additional observations that do lead to an improvement of precipitation forecast along the West Coast."
During this series of storms, numerous research aircraft have flown into the storms to collect weather data that wouldn’t otherwise have been captured.
Torn said the West Coast lacks extensive conventional forecast infrastructure like on the U.S. East Coast.
"So it's very expensive to take observations out over the ocean," Torn said. "Over the oceans of most of the world actually, the primary observation source is coming from satellites; and so the satellites are measuring something like the temperature and humidity."
"One of the real benefits that comes from this aircraft data is that we can fly them in a lot of regions that otherwise you wouldn't be collecting any other data," Torn said. So we're really finally focusing what the atmosphere looks like upstream in the atmospheric rivers days before. Then that leads to better forecasting of where that atmospheric river is going to make landfall on, which then can give better precipitation forecasts."
Torn said increasing our understanding of atmospheric river behavior is vital at this time of greater water scarcity in the American West.
"This is an excellent example of how we can use science, computing, and our observations to really create forecasts that help us conserve our resources, Torn said. "Trying to figure out what's the point in the Spring where you really want to start collecting that water; and the more water that you can keep in the Spring, the more water then that's available in the Summer and into the Fall.