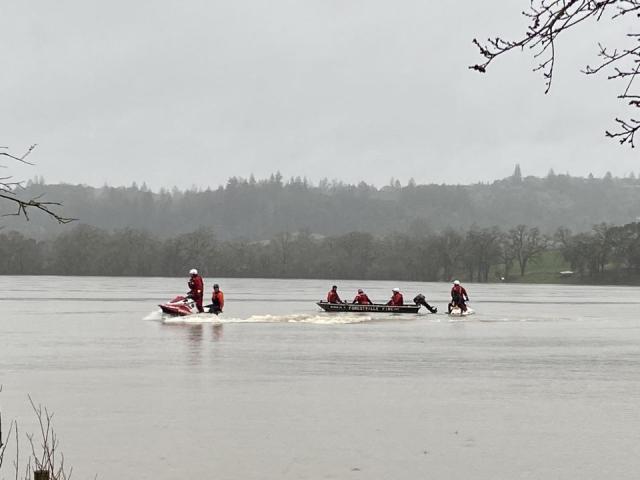 Rescuers searched for the vehicle Tuesday
photo credit: Courtesy: Sonoma County Sheriff
Authorities have identified the woman killed when her vehicle was apparently swept off of Trenton-Healdsburg Road Tuesday as 43-year-old Daphne Fontino of Ukiah.
Fontino's body was found Wednesday morning in her vehicle under eight to ten feet of water in a vineyard, about 100 yards off the road, according to the Sonoma County Sheriff's Office.
Fontino's husband Marc, is struggling to come to terms.
"It's like a nightmare for me and I haven't came to the reality yet that it actually occurred, because, in my mind she's going to be driving home and knocking on the front door."
Rescuers in boats and helicopters were unable to locate the vehicle during a search before night fell Tuesday.
Fontino had called 911 shortly after 10 a.m. Tuesday, saying water had reached the hood and entering the passenger compartment before the call dropped. Attempts to call her back were not successful.
The tragedy is shattering to Marc Fontino
"I've lost my best friend. The love of my life. I know she's in a great place now, she's going to be well taken care of. I never imagined in my right mind that....I though she'd be burying me, not me burying her. I'm just not ready for this."
Fontino's sister, Jennifer Dean of Ukiah, set up a fundraiser on the website go fund me. As of Thursday afternoon, nearly twelve thousand dollars had been pledged.
Fontino leaves behind five children.
Authorities are also investigating two other, possibly storm-related deaths. The bodies of two men were found inside a home in Sea Ranch Wednesday morning, possibly victims of carbon monoxide poisoning.
The bodies were found by a tree crew, sent after a tree fell on the home on the 300 block of Spinnaker Close. A switched on generator with an empty fuel tank was found in a hallway of the home. There were no signs of foul play. Authorities continue to investigate. The deceased were identified as 74-year-old Gene Beauchamp of Colusa and 61-year-old Phil Mabray of Biggs in Butte County.