What does this stream of rain mean for groundwater levels? Here's what one expert has to say 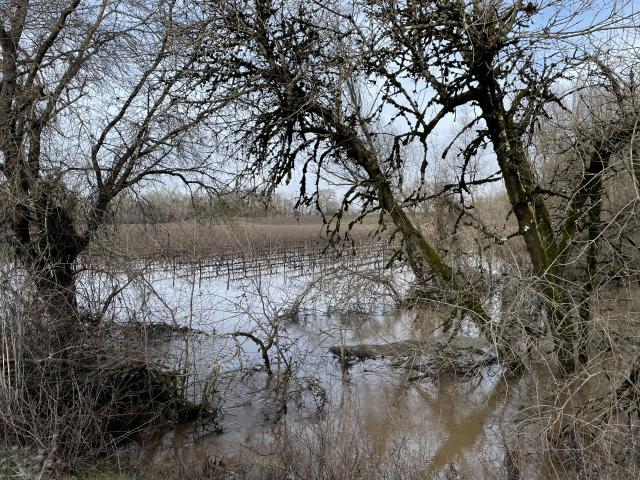 photo credit: KRCB/Noah Abrams
The consistent stream of rain and mountain snow that’s rolled through California has raised lots of questions about drought conditions and groundwater levels.
Marcus Trotta, groundwater expert with Sonoma Water, said it’s complicated.
"Groundwater recharge is really one of the more challenging things to really understand and characterize," Trotta said.
Rain is of course a good thing for replenishing groundwater, Trotta said.
"In general, groundwater recharge occurs through a couple different mechanisms," Trotta said. "One is when precipitation falls on soils and some of that precipitation will run off. Some of it will get used by plants and vegetation."
"Some of that water will infiltrate and kind of pass the root zones of those plants and make it to the groundwater table and contribute to recharge."
Trotta said local conditions are the most important factors in recharge.
"Where that occurs can be highly variable, especially in our region," Trotta said. "It's really dependent upon the soil types and underlying geology, the depth to groundwater; and in our area, we do have a lot of silts and clay's that have been deposited near the surface right beneath our soils or as part of the soil materials, which in many areas can reduce or inhibit recharge,"
"Areas like that are like along the Laguna de Santa Rosa where it has slower moving waters and you can have lots of shallow clay's that can lower the rate of recharge."
Some local conditions are better than others, Trotta said.
"The better recharge areas that have been mapped in the county are along stream channels where you generally are going to have coarser grain sands and gravels that allow that water to infiltrate," Trotta said. "As well as at kind of the base of the hills where those streams come out."
"Often you have what are known as alluvial fans form where the kind of streams come out of the hills and you generally get deposits of coarser grains, sand, and gravels in those areas as well."
The previous five years of drought between 2012 and 2016 prompted the creation of state mandated Groundwater Sustainability Agencies, including as Trotta noted, three in Sonoma County.
"We have been doing a lot of studies and have increased our monitoring capabilities for groundwater levels in areas of Sonoma County in particular the Santa Rosa Plain, and Petaluma Valley, and Sonoma Valley," Trotta said.
Much is still to be learned from those areas according to Trotta.
"Part of that effort has included starting some of the studies and increasing those monitoring networks to evaluate groundwater conditions, including where recharge occurs and perhaps where it can be enhanced," Trotta said.
Trotta said this steady stream of rain has been a welcome sight.
"We're certainly hoping to get good amounts of recharge, especially after the past couple years of drought," Trotta said. "Groundwater levels were at their historical lows in many of the wells that we've been monitoring in those three basins."
"What we've seen in the past is when groundwater levels do decline in the times of drought, as long as there's not over pumping occurring, those groundwater levels do generally recover and get replenished during wet periods."
Waterways and their natural floodplains serve important roles in flood control most obviously, but in water retention and in groundwater recharge as well.
Trotta said there has been increased recognition of their role by the state, especially after decades of encroaching development into wetlands and floodplains.
"They've provided funding for local agencies to do projects that either restore some flood plain capacity and provide groundwater recharge," Trotta said. "These are known as Flood MAR, flood managed aquifer recharge projects and there's actually a project up in Alexander Valley along the Russian River."
Trotta said the project in Alexander Valley has exciting potential.
"It's currently being designed and led by the Dry Creek Rancheria as well as wine grape growers up in that area to take wintertime water that would otherwise be flowing out to the Pacific Ocean and basically, you know, flood their fields during the winter, to add more water than would otherwise occur just from rainfall, and allow that water to recharge in and raise groundwater levels, and hopefully help support base flows in the Russian River during summer and fall when those flows are a little more critical," Trotta said.
Trotta said recognition of the importance of keeping water in the landscape in the region has been growing, and growing in a way that matches up to local hydrology.
"Because a lot of the recharge occurs through stream channels in our region, and that's actually kind of a more important area, I think there's been increasing recognition in the urban landscape on what's known as low impact development that recognizes the importance of storm water as a resource rather than letting it flow down to your neighbor's property or out to the ocean," Trotta said. "And so most new developments in the county incorporate those types of designs."
Even with low impact designs, the recently approved Sonoma Developmental Center redevelopment plan could face water issues due to decreasing groundwater levels.
"Most of the areas where we do see more long-term groundwater level declines  are in the Sonoma Valley groundwater basin in areas that are not necessarily those urban areas," Trotta said. "There's mixed groundwater uses of rural residential agriculture as well as golf course irrigation in the case of one area of Sonoma Valley," Trotta said.